With biogas, farms and lakes can coexist 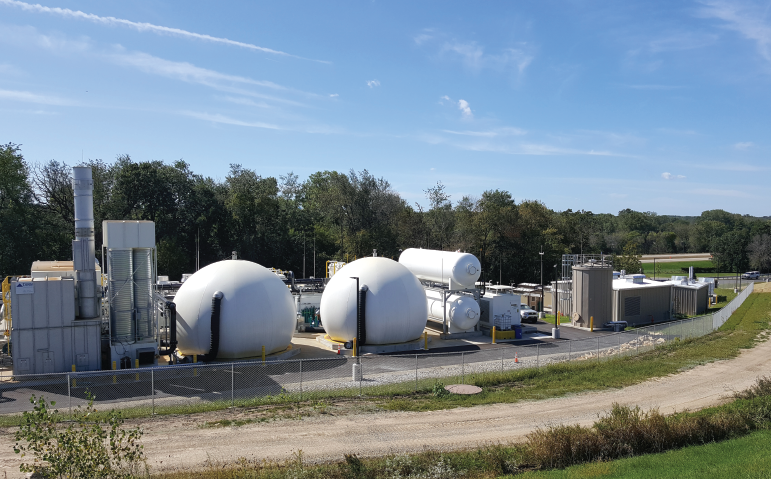 Dane County’s biogas facility is among the new technologies that give farmers better ways manage their farms while preventing phosphorus from getting into local lakes and streams. (Photo provided by Daniels Construction)

A number of promising technologies have emerged to prevent phosphorous from farm waste from getting into the local watershed, and the production of biogas is one of them.

Dane County is sold on the environmental and business benefits of this fuel source, especially after opening a biogas facility at its Rodefeld Landfill on Madison’s east side. Not to be confused with another biogas facility in Springfield, which uses anaerobic digestion to turn farm waste into renewable energy, this one also uses household waste, including food waste that has gone into the landfill, to generate biogas, explains John Welch, director of Dane County’s Department of Waste & Renewables. It is the first project nationwide to receive biogas from multiple sources and connect the renewable gas with compressed natural gas (CNG) stations.

Anaerobic (oxygen-free) digestion is a biological process in which microorganisms break down organic waste in a process that produces biogas that is burned to generate energy, and landfills are a rich source of the gas. “We have areas of landfill where we are extracting gas, and we haven’t put waste in those areas for 20 years,” Welch says. “We extract anywhere from 1,600–1,800 standard cubic feet of gas every minute.”

Once the waste gets into the landfill, it acts as a digester because deep inside that pile of waste, there is no oxygen, meaning it’s anaerobic, and as the waste breaks down, it produces biogas that is 50–55% methane. The natural gas that runs through a pipeline to your furnace is about 95–97% methane, and for the digester-produced gas to approach that, elements like carbon dioxide and nitrogen are removed.

Farms with anerobic digesters on their sites appreciate biogas production because it’s a way to manage nutrients and generate some revenue, and environmentalists appreciate it because it prevents phosphorous from running into streams, rivers, and eventually lakes. Farms that invest in anerobic digestion clean the gas, have it brought to the biogas facility at Rodefeld Landfill via tanker truck, and receive a preferential rate from Dane County for offloading their gas.

At the Dane County site, the offload station, which was built by Daniels General Contractors, is the piece that allows farmers with manure digesters to bring gas into the site. “When they [Daniels] built this, it was the first or the second in the nation that was doing this, where we had outside customers bringing gas into our site,” Welch says. “There were probably about 10 offload stations in total across the nation, but it was always where one company owned multiple digesters and they were coming into one site.”

In terms of the actual construction, the $29 million facility was a unique project. It has the potential to generate more than $1 million per month in revenue, but it had to be built in nine months — a very tight construction schedule. During the middle of construction, the footings were all open and everything was ready to be poured when 16 inches of rain fell on the afternoon on Aug. 20, 2018. Construction was delayed by three weeks while the resulting mess was cleaned up, but nine months after ground was broken, biogas from another source was being put into the pipeline.

The business case for farmers with digesters starts with the preferential rate given for offloading their gas, which encourages advanced phosphorous removal in the Yahara Watershed, but it also makes farms more sustainable. “They have quite a bit of revenue potential off of the biogas from their manure,” Welch states, “so again it’s making farming in Dane County more sustainable, both economically and environmentally, into the future.”

It’s also a potential boon for farmers outside of Dane County and for the environment. “If a farm from Fond du Lac wants to bring gas to us, we’ll contract with them to bring gas to us,” Welch adds. “If there is a farm in the Dane County watershed and they want to do advanced phosphorous removal, which is what you’re talking about with this system, then we offer a preferential rate. The county actually take a loss on that, but for us it’s important because that means we’re cleaning up the lakes right here in our watershed.”

Keeping energy dollars local adds to the business case. “We don’t have natural gas reserves, and we don’t have oil, so all of those energy dollars are leaving the state,” Welch notes. “Now, we have more of those dollars staying local, and we have companies like Daniels, which is employing people to build these facilities. We have our own employers and other contractors that are operating the facility, so those dollars are staying local to generate renewable energy.”

In time, the county could scale up the Rodefeld facility (aka Dane County Site No. 2), and this method of producing biogas might also extend the life of landfills. The county landfills about 225,000–250,000 tons per year of waste at this site, but the initial focus is to find a good end use for the biogas already produced in the landfill. Welch says Dane County has fielded inquiries from other county governments and from some construction companies to see if they can replicate this project, which could serve as a national model.

“Absolutely,” he states. “Yes, we’ve had a lot — I’d say in the dozens — of other counties or other companies that have wanted to see the site, or ask questions, who want to do something similar. We’ve had digesters from our county, from our region, and beyond that have either signed up to bring gas to us or have shown interest. We want this to be a model for others who want to do something similar.”

Whatever interest there might be, farm operators might need some government assistance to make the economics work better, according to Charles Crave of Crave Brothers Farmstead Cheese. The farm is located in Waterloo, just east of Madison in Jefferson County, and is one of 34 Wisconsin agricultural operations with an anaerobic digestion system (in total, there are 136 operating anaerobic digester systems in the state, according to the Wisconsin Biogas Survey Report, and most of them at municipal wastewater sites). The Crave Brothers system produces methane gas and generates enough electricity — 633 kilowatts — to power its farm, cheese factory, and 300 area homes.

Waste from the farm and cheese factory go into two 750,000-gallon tanks that, through anaerobic digestion, produce the methane gas. An 800-horsepower engine is running off the methane and turning an electromagnetic generator to generate the electricity. In addition, the Crave family uses liquid byproducts as fertilizer on its fields and solid byproducts as animal bedding.

With about 8,000 Wisconsin farms that milk cows, plus the state’s beef and pork producers, Crave notes that such systems are not yet widely adopted on farms. They are expensive to install and, according to Charles Crave, farmers don’t feel they are paid enough for the electricity they are generating. With its current system, it will take seven to 10 years — about the lifespan of the system — to pay back the farm’s $2 million–$3 million investment in the digester, which Crave views as a poor return on investment.

Having said that, he is excited about the technology, but he believes that help with the economics in the form of government subsidies would tap more of its potential. “I’m a free-market guy and not a big subsidizer, but if we’re talking about subsidizing windmills and subsidizing solar panels or giving tax credits to different people for investing in those, farmers should also be in line with that if we’re serious about renewable energy as a society,” Crave states.

Over the past few years, digesters have been expanding in Wisconsin, especially in rural areas that have real challenges with water quality. Pre-pandemic, Dane County Executive Joe Parisi notes the county was giving 150 tours a year of its landfill, and he hopes some of the fear factor has been removed. “We were one of the first to do it, and so we hope that this makes it a little less scary for others to dip their toes in the water because now they can see how it was done, that someone else did it, and that it’s successful both in the product it’s producing and in the economic model that it’s based on,” Parisi states.

Between the biogas facility and a new nutrient management system, which also is designed to handle farm waste in a more environmentally friendly way, there are solutions that portend good things for agriculture and other business development. Parisi agrees that the business benefits of these systems sometimes get lost because most of the attention is on the environmental benefits, but he also notes they are intertwined. The county’s goal is not only to strengthen the existing digesters, but to develop more of them because they are a “win-win-win” for economy, the farmers, and the environment.

“That’s what’s really exciting about these projects,” Parisi states. “They are good for the environment, they are good for the farms, and the economics work, especially now that we’ve built the offloading station at the landfill. We built that facility at the landfill to deal with the landfill gas, but we also built the offloading station with our digesters in mind because we knew the economic model was so much better if you were able to compress and sell that gas as transportation fuel versus using it to generate electricity.

“And so, what we’re excited about is that this has basically given a rebirth to the digester industry and to our ability to provide an environment in which they can be on solid economic footing.”

Wonder Bar to be saved, for now

Create-Ability to cease operations, lay off 61