The unique biodigester recycles 300 pounds of food waste each day.

Food waste is a significant problem that doesn’t always get a lot of attention. However, the environmental and economic implications of food waste shouldn’t be ignored.

Locally, Madison College is doing its part to combat the food waste problem with the utilization of “Chester the Digester.”

The biodigester, believed to be the only one of its kind in the nation, just received the Wisconsin DNR’s Recycling Award for Innovation. It gobbles up all the compostable products from Madison College’s culinary arts, baking/decorative arts, and cafeteria areas, and the kitchen scraps are converted to a fluffy brown material that can be used in gardens and for plantings.

“We figured out we needed a system that would consume roughly 25 tons per year of vegetable scraps, leftovers, and foods that can no longer be served,” says Chef John Johnson.

Chester, as the biodigester is affectionately known, was acquired three years ago and it’s been in service ever since eating up to 300 pounds of compostable products each day. Its purchase was funded through an innovation grant. 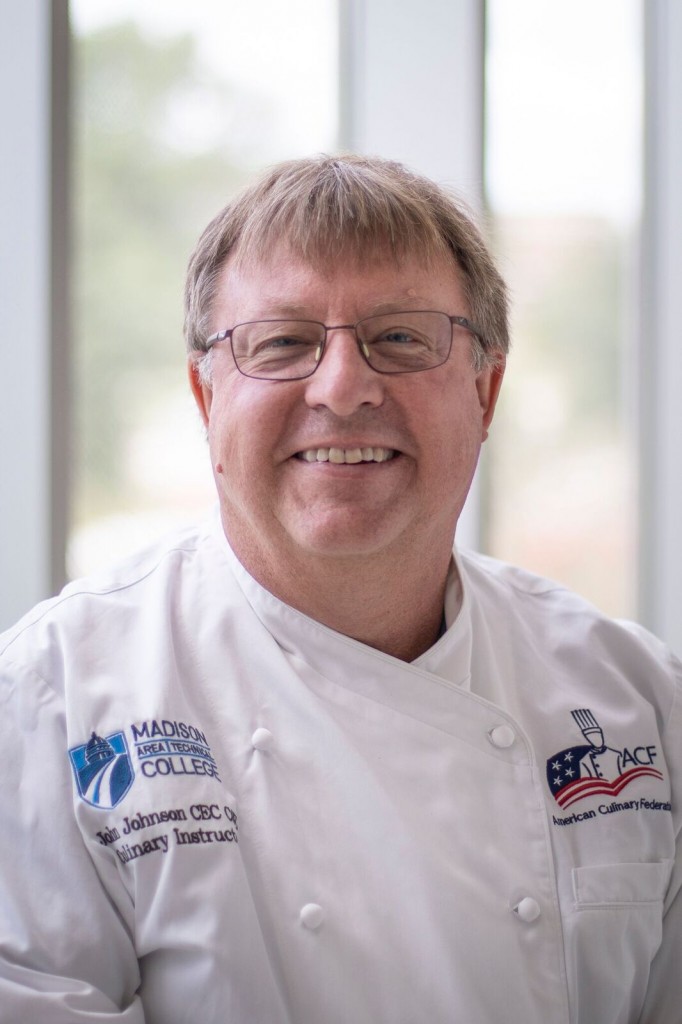 “The biodigester is very unique in that it goes from scraps to compost in 24 hours using heat and bacteria to accelerate the process,” explains Johnson. “The system is also unique because it’s not hooked up to the sanitary system and we keep all nutrients with the compost. Everything stays in the compost to go back into the soil to be used again.”

Biodigesters can be hooked to the sanitary system, notes Johnson, and those typically chop and wash nutrients into holding tanks or directly to the sewer.

Prior to acquiring Chester, Madison College put all its food waste that wasn’t recyclable into the landfill. “It’s easy to do but ethically wrong to fill the landfills, producing methane that would escape into our atmosphere and pass the buck to future generations,” says Johnson.

Madison College utilizes the compost around the landscape of the college but also sells it through the cafeteria during earth day. Proceeds go to Big Dogs Food Pantry, located at the college, for students in need.

“Other colleges have expressed interest about putting in the system and have asked many questions about what we’ve experienced so far,” notes Johnson. “It’s up to us to leave it better for future generations and this is a good start. Once the system is installed, it’s easy to maintain and use the compost.”

Food waste by the numbers

While the world wastes about 1.4 billion tons of food every year, the United States discards more food than any other country in the world: nearly 40 million tons — 80 billion pounds — every year, according to Recycle Track Systems, a waste and recycling management company. That’s estimated to be 30–40% of the entire U.S. food supply and equates to 219 pounds of waste per person. That’s like every person in America throwing more than 650 average-sized apples directly into landfills, where most discarded food ends up. In fact, food is the single largest component taking up space inside U.S. landfills, making up 22% of municipal solid waste.

Only 5% of food is composted in the U.S. and as a result, uneaten food is the single largest component of municipal solid waste. In landfills, food gradually breaks down to form methane, a greenhouse gas that’s up to 86 times more powerful than carbon dioxide. According to a report from the U.K.-based organization WRAP, if food were removed from U.K. landfills, the greenhouse gas abatement would be equivalent to removing one-fifth of all the cars in the U.K. from the road.

Consumer food waste also has serious implications for energy usage. A study by the consulting group McKinsey found that, on average, household food losses are responsible for eight times the energy waste of farm-level food losses due to the energy used along the food supply chain and in preparation. In addition, food waste is responsible for more than 25% of all the freshwater consumption in the U.S. each year and is among the leading causes of fresh water pollution.

According to the nonprofit organization Feeding America, Americans waste more than $218 billion each year on food, with dairy products being the food item we toss out the most. The average American family of four throws out $1,600 a year in produce.

Waste comes primarily from America’s homes (43%) and restaurants, grocery stores, and food service companies (40%), where people throw out food, followed by farms (16%) and manufacturers (2%), where too much food is produced.