Yet another reason for the recall, job creation, sputters out

WARNING: Do not operate heavy machinery while reading this blog!

The “War on Women” is a joke. (Shown below is one such victim at the weekend’s state Republican Party convention.)

How about job creation as an issue? That may be a non-starter as well.

He tells the Association of Government Accountants (love to boogie at their happy hour!) that income is growing in Wisconsin, unemployment claims are down. The size of the workforce has expanded, suggesting that workers in Wisconsin are not discouraged. The biggest job gains are in manufacturing, “startlingly so.” At the same time, income tax, corporate tax, and sales tax receipts are up.

“If we were having 30,000 job losses, we wouldn’t be seeing what we are seeing,” Koskinen, a career civil servant, says. He goes on to explain the arcane practice of re-benchmarking, which he suggests is skewing the BLS establishment (employer) numbers. Because its own survey of the labor force – which is another survey entirely – shows more employed workers in Wisconsin. (See the third line in the table, employment.)

We came home with plenty of convention swag!

And lots of bling! The Lovely Lisa attended her first political convention of any kind this weekend in Green Bay. Amazing how a recall campaign can awaken conservative interest in politics!

We came home with plenty of convention swag. The Tom-My-Senator hospitality room was a gold mine of goodies. We scored two blue and red T-shirts, mine a size XL, but not the desired red caps. A pretty girl draped beads around our necks that bore a round pendant bearing the candidate’s name. We were plastered with various lapel pins and stickers. 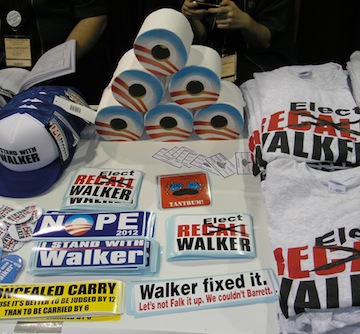 Mark Neumann’s T-shirts may have been the most clever. Green and gold in Packer Country with Neumann’s last name on the back over the numeral 12. That stands for 2012 but happens to be the number of a certain Super Bowl-winning quarterback.

Eric Hovde’s campaign had the most ingenious tchotchkes: plastic, air-filled billy clubs that his adherents would whack together to create noise in support of their candidate. That stuff is important in a convention.

Being right across the street from Lambeau Field, the Missus and I visited the Packer Hall of Fame. Totally worth the admission ($10 each). Lisa was most interested in the progression of safety equipment from old Curly’s leather helmets back in the day.

But the coolest thing was State Rep. John Klenke tooling around the convention in his Segway. (WisPolitics has it.) What say we mount up a posse of Republican Segway-ers and drive the Jeremies out of the Capitol?!

Walker put on a fabulous fish fry Friday night at the KI Center in downtown Green Bay. Fried and broiled fish, corn on the cob, chicken, red potatoes, coleslaw, and free beer. Went back for seconds of the food and thirds of the brown elixir.

Found an empty table with chairs in the lobby where the various candidates and interest groups had set up shop. I repurposed the unprinted side of a campaign poster to read “V.I.P. Drinking Area.” Conventioneers came to see us, including John and Jackie Rader, who had come down from Washington Island. Also saw Sheehan Donoghue who had come over from Plum Lake.

We had been forewarned Friday night that we could expect shenanigans on the convention floor the following day. Saturday at the Shopko Center, the Lovely Lisa looked at her program trying to find when the shenanigans were scheduled.

Sure enough, a tea partier hung up the proceedings by demanding a roll call vote of the 71 county delegations (no Menomonie County) on an obscure resolution involving a hitherto and deservedly obscure act of the United Nations. The roll call failed by the same 2-1 margin as the voice vote indicated. Then there was a verbal scuffle over seating some last-minute party members as delegates. That was defeated as well.

Seemed important at the time, I guess.

In his “A Tale of Two States,” the TrogloPundit asks, “If They’re Going to Recall Walker, What’ll They Do to Brown?” Jerry Brown, as in California Gov. Moonbeam, whose earlier estimate of a $9.2 billion deficit turns out to have been too low by almost half.

Bring It! contest: Guess the day that Tom Barrett will answer a fundamental question: If you don’t like how Scott Walker balanced the state budget in the face of a $3.6 billion deficit, what would you have done? We’re now exactly three weeks out from the June 5 recall election. That’s 21 days and counting.

Scott Walker is our first contestant. He said Saturday morning in Green Bay, “I think he knows but he won’t tell.”

• Obama gives up on Wisconsin recall, says the WaPost.