Wisconsin Democrat(ic) recall primary results are in (no use voting)

This is the last statewide race for both “The Kathleen” Falk and Tom “We Can’t” Barrett. Please?

It’s Barrett’s third try for governor, Falk’s second – plus once for attorney general. They’ve got nothing to lose and they’ll take each other down if they must. I’ll hold their coats.

Who survives the Democratic recall primary on May 8, next week Tuesday? Glad you asked.

The white-lab-coat guys at the Blaska Policy Research Center and Herpetarium (bankrolled by the lost Koch Brother, Raoul) fired up Old Sparky* over the weekend. (*Our vintage Sperry-Rand mainframe computer, shown here with our director of research, the late Oskar Homolka, 1898-1978. Applications still accepted.) 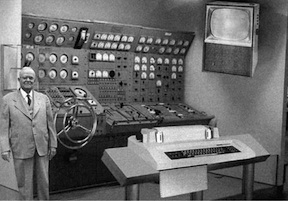 Endorsements: +1 point for Barrett. He’s got the party poobahs behind him, headed by their lion in winter, Dave Obey (so irascible he makes Squire Blaska look like S.Z. "Cuddles" Sakall). Damnably for Falk, those endorsers include the last five mayors of Madison and the face of the Fleeing 14, Sen. Jon Erpenbach. The Kathleen has the environmentally insane Brett Hulsey and … and …?

Endorsements convey electoral stature but I’m not convinced they sway that many voters.

Likability: +2 points for Barrett. Kind of guy who would run to the aid of a woman in distress and take a beating, as he did two summers ago at State Fair Park. The Kathleen: kind of woman who would administer the beating.

Passion: +3 for The Kathleen. No shrinking violet, she knows how to go on the attack. In spokesmouth One Scot Ross, she has her pit bull. Tom Barrett is the second lead who loses the girl to the best man in the final reel. AWOL at the Siege of the Capitol; didn’t even send a postcard. The drummers and vuvuzela blowers haven’t forgotten, they won’t forgive, they will vote.

Baggage: Subtract -3 from The Kathleen. Back up the truck. Her wholesale sellout to Big Labor is a modern-day corrupt bargain. None of that La Follette/Proxmire independence for Our Kathleen. When Falk talks, union heavies Marty Beil’s and Mary Bell’s mouths are moving.

Identity politics: +1 for The Kathleen, furiously playing the gender card. Democrats put huge store in this stuff. In a close election, Dem voters will say maybe it’s time Wisconsin joined Germany and the U.K. and elected their own Iron Maiden. Falk has already made common cause with Mahlon Mitchell, the head of the radicalized state firefighters union and amply endowed with melanin.

Milwaukee versus Madison: 0/0 – no advantage. Falk IS a typical Madison liberal – more Green than a Brussels sprout, louder than a used car salesman’s sports jacket, more PC than the bumper stickers on a Prius. Countering that, the rest of Wisconsin thinks Milwaukee is Somalia on the Lake, a failed city where babies are put to sleep in bathtubs to avoid the crossfire. No governor has been elected out of Milwaukee in the last 70 years. This one is a draw.

Money: +1 for The Kathleen. The candidates themselves are pretty much even-steven, with Falk reporting a cool million dollars in campaign contributions and Barrett raising $750,000 in a shorter period. Her advantage is the “independent” expenditures of Wisconsin for Falk. (Or is it Falk for Wisconsin? One of them is her committee, I think. Where’s DA John Chisholm when you need him?)

Message: +1 for Barrett. I’ll be damned if I can discern any message except “I got the best chance to beat Scott Walker.” Both refuse to say how they’d pay for full funding of schools and restoration of union benefits that they seem to promise. That means higher taxes, which is catnip to voters in the Dem primaries, poison in the general election.

Muscle: +3 for The Kathleen. She may not have the endorsements but she has the public employee unions. No Democrat can win statewide without AFSCME and the teachers union, and she’s got ‘em. The public employee unions can pour in money, staff the phone banks, and put boots on the ground in a door-to-door, turn-out-the-vote effort.

By contrast, those two entities loathe Barrett. He said the right thing about taking over Milwaukee’s failed public schools – as his mentor Rahm Emmanuel did in Chicago – and the teachers unions will make him pay for it. 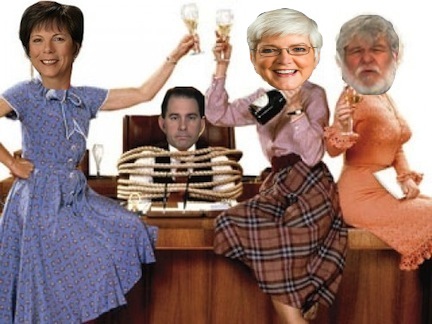 Final score: +1 for The Kathleen. (Toasting Mary Bell of WEAC and Marty Beil of AFSCME.)

Moderates and independents, the type of voter Barrett may have attracted in a general election, sit this one out. (Wisconsin has open primaries.) They’re unconvinced that Wisconsin has gone to perdition under Scott Walker. Their schools are open for business, their property taxes held steady or decreased for the first time in 12 years, they think the recall is unfair, and they are sick of perpetual politics.

Falk wins on May 8 by less than 1% and (Platinum Subscriber bonus prediction) loses on June 5.

Ann of Althouse asks, “What would Barrett and Falk do that would increase the number of jobs in Wisconsin? Hire more government workers?” Althouse points out the 74% of the lost jobs were government jobs. Remember how Milwaukee, Kenosha, and Janesville teachers unions chose layoffs?

How can Democrats claim to be job creators when they deep-sixed the iron mine in Iron County?

Wisconsin paradoxically leads the nation in job losses over the last 12 months but still has 18,500 more people working in March 2012 and 24,700 fewer people unemployed than when compared to March of a year ago, according to the BLS.

Wisconsin was one of 18 states that recorded a statistically significant drop in the unemployment rate during the same March 2011 to March 2012 time frame, from 7.6% to 6.8%. Meanwhile, Milwaukee’s unemployment rate skyrocketed by 29% and the city stands as the ninth poorest in the nation.

Here’s the Walker counterblast at Barrett:

On Sunday’s UpFront With Mike Gousha, a statewide TV news magazine produced in conjunction with WisPolitics.com, Walker said surveys of businesses show that the “biggest single worry they have is what’s going to happen in this recall.”

Employers are waiting to see if the next governor is Walker or Michael Moore.

In any event, if job losses were meat for recall, Jim Doyle would have been ridden on a rail, high-speed or not, out of town. 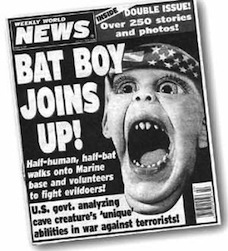 Let’s start with a high-volume shout-out for Ed Anger of the Weekly World News, who began many a tirade thusly: “I’m tire-biting mad …!” Now, THAT is angry! So, here goes! (Store your Potenzas in the garage and close the door!)

• I’m so mad I could take a pressure washer to the Occupy Madison’s shanty town! Their camping permit expires today, April 30, and they’re crying “eviction”?! They’re homeless but they’ve got lawyers?! Want to clear out the occupiers? Send in the job counselors.

• I’m so mad at the Democrats’ identity politics I could kiss a transvestite! How much longer can Democratic women play professional victims?! “The Kathleen” Falk is looking for more Dabney Colemans to hogtie, like Jane Fonda, Lily Tomlin, and Dolly Parton did in Nine to Five! That movie was released 32 years ago! Jimmy Carter was president!

Even Zach Wisniewski on Blogging Blue calls out our Kathleen for cynically playing the gender card in her contest with Barrett, the hated male.

• I’m so mad at the public employee unions and their recall election I could quote The Other Kathleen running for recall governor! State Sen. Vinehout told a WisPolitics.com luncheon in Madison last week that she doesn't believe collective bargaining for public employees will return to Wisconsin as it once was, saying, "Things have changed"!

"A few Democrats think that we can roll back the last two years, but I don't think that's realistic!” And she was one of the “Fab 14” who fled to Rockford, Ill.!

So what is this recall all about?

No tips for servers at new Willy Street restaurant