The city of Madison existed only on Judge Doty’s paper when, in 1837, a party of 37 men passed through a wild landscape almost totally devoid of houses, much less farms. Only five years before, the Native Americans had been cleared out with the defeat of Winnebago Chief Blackhawk, whose people were exiled to Iowa.

Led by Augustus A. Bird and his brother Charles H., the intrepid party had traveled all the way from the fledgling town of Milwaukee. This was the crew hired to build the new territorial capitol in Madison, the first of three at the site. The 1877 “History of Dane County” tells the story:

On the 5th day of June, the men, tired, foot-sore and depressed, plodded their weary way through the wild scenery of this then unexplored wilderness. Nine days had elapsed since they started on their weary march and they had been drenched with rains and oppressed with continuous cloudy and lowering weather – the sun had not once gladdened them with its beams since the day on which they left Milwaukee. At length, as they emerged upon the borders of the beautiful prairie about two miles east of where the village of Sun Prairie now stands, the sun shone forth in all its brightness and illuminated the scene before them as with a halo of glory.

They called the place “Sun Prairie” and carved the name “into the bark of an oak tree which stood near by.” Five days later, they arrived on Madison’s isthmus, where only one cabin stood, that a public house erected at the foot of what is now Butler Street for Eben and Rosalie Peck, who had arrived a month earlier.

This fascinates me because that little party – most of them on foot, it would seem – passed right by the house in which I grew up (so to speak).

Sun Prairie historian Peter Klein tells me that a wood pole now stands at the exact location of the famous old tree. It’s very near to the new family home Don and Shirley Statz built on the old Schuster farm, on Skala Road, between the railroad tracks and Wisconsin Hwy 19, due east of the city of Sun Prairie. That’s about halfway between Town Hall Road on the west and County VV on the east.

Your humble squire was sent reeling into the near and distant past by the announcement earlier this week that the Statz families, including Rich and Veronica and their sons, would host the Farm Technology Days two years from now, in August 2015. It’s Wisconsin agriculture’s biggest field show and will attract thousands of forward-thinking farmers.

Historian Klein tells me the Blaskas and the Schusters, to whom we are related, cut the historic tree down for firewood long ago. However, this was after it was struck by lightning, so cut us some slack, okay?

The Statz Brothers started out in Section 2, on the northeast corner of Wisconsin Highway 19 and County VV. My grandmother Rose Schuster Blaska, born in 1885, always referred to that corner as “Peckham’s Corners” after the original, long-departed Yankee settlers. Such local names were used to negotiate the unpaved roadways before an orderly highway-numbering system was devised. (Wisconsin was the first state to set up a statewide posted route numbering system in 1917. The county lettering system followed in 1921, as explained here.)

Peckham’s Corners played a role in the political development of Sun Prairie. The 1880 History of Dane County tells that the Town of Sun Prairie was organized in 1846 at the home of John A. Peckham, who lived in Section 2. Across the road in Section 3 lived Parden Peckham.

However, the 1877 “History of Dane County” (this bylined by the editor of the Sun Prairie weekly newspaper of the time), puts the organization in 1840 at the home of C.H. Bird, the town’s first settler, one of the first residents of what is now the city. (The original town included Medina, York, and Bristol, which separated by 1848. The village of Sun Prairie was not incorporated until 1868.)

One-half mile north of Peckham’s corners was Oak Lawn Elementary School (shown in the 1890 plat book), where my grandfather received his only education, my father his first eight years, and I my first two years of schooling in a one-room schoolhouse with outdoor privies. Enrollment when I was there: 17 kids. It was converted to a residence shortly after the historic consolidation of school districts in about 1961. 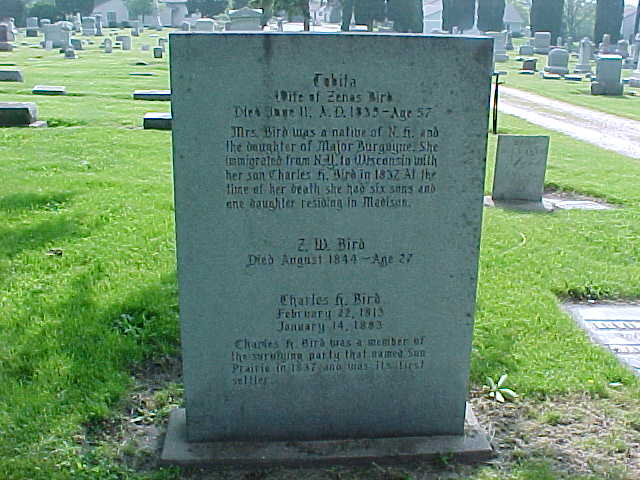 If you really want to go back in time, access the website of the Board of Commissioners of Public Lands. It has digitized the actual hand-drawn maps and field notes of the surveyors who rode the virgin country – for Dane County, shortly after the defeat of Chief Blackhawk. Town lines were drawn from 1831 to 1833, section lines from 1832 to 1835.

Here are the field notes for the drawing of Sections 3 and 10 (location of this year’s Farm Technology Days), written Sept. 9, 1834 by surveyor Orson Lyon. (He was assisted by two chain men and one axe man.) Note the references to what natural landmarks existed: here a burr oak, there a black oak on the land “rolling and first rate, with prairie grass.” To raise the quarter-section post, “I raised a mound of earth 3 feet square and the base.” Click on the state map to access your area.

In 1836, the one-mile-square townships – numbered 5 through 9 going north from the Illinois line and ranging from 6 through 12 going east – were carved out of Iowa and Milwaukee counties and created as Dane County. (Thus, the township of Sun Prairie is township 8 north, range 11 east.) Population: 29 souls. The first election of officers was held in May 1839.