Will the Left throw a tantrum in Tampa?

Will there be beer at a Packer game?

As uncertain as the weather can be, there is one certainty: liberals will make fools of themselves and take pride in doing so.

The marching, chanting, placard-waving gaggle of Lefties picketing a Republican event is as predictable as hornets at a late-summer cookout.

Those whose sense of self-importance is exceptionally overweening will taunt the police, attempt to shout down opposing viewpoints, and break things.

These folks feel perfectly justified in disrupting a Special Olympics ceremony if presided over by a governor with whom they disagree, as they did last year during their Siege of the Capitol here in Wisconsin.

In Appleton, an aging liberal felt entitled to spit in the face of a Republican. Not being Madison, the expectorator is being brought up on charges. (Details here.)

In Janesville, the Radio Slymer tried to upstage Sen. Ron Johnson and Rep. Paul Ryan, requiring intervention by the police, according to The Janesville Gazette.

You may remember the mayhem the Left caused in the Republican national convention in the Twin Cities four years ago (ironically, also delayed by a tropical storm), the World Trade riots in Seattle, the Occupy This debacle (Occupy Oakland, November 2011 is shown here), and other public embarrassments. 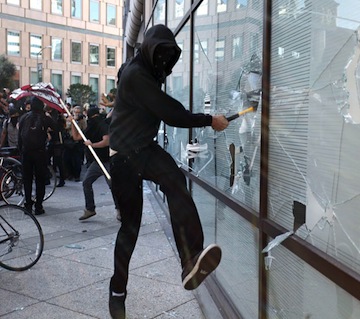 The Left engages in noisy street theater partially in the hopes that TV cameras and credulous note takers will beam their bumper sticker slogans back to the lumpen proletariat at home. The other reason is to drown out that speech with which they disagree. They will rationalize their heckler’s veto with creative self-justification. The other side has more money; is immoral; wrong on the issues; is insufficiently black, brown, red, gay or female; or holds power (due to their election by the people).

It’s all about self-validation. The typical social studies drop-out has convinced him/herself (if no one else) that they are foot soldiers in something they like to call “the struggle.”

They fancy themselves as latter-day Martin Luther King Juniors, martyrs for peace, troubadours for “economic justice” (aka socialism), defenders of Goddess Earth, and liberators of the impregnated womb.

This characteristic, a sociologist might note (were he to study such fauna), is what distinguishes the prog-lib from our conservative/libertarian brethren. I include in this taxonomy such specimens as Tim Cullen, Tom Barrett, and Dave Zweifel – otherwise reasonable folk who strategically turn their gaze from such depredations. They utter no approbation on the principle of “no enemies on the Left.”

What the Squire of the Stately Manor does not understand, for the life of him, is how even the most outré of the species, say, Matt Rothschild of The Progressive magazine, thinks this political hooliganism furthers their cause.

After all, it didn’t work against Scott Walker.

The institutional liberal bias at The New York Times is put on the record by Arthur S. Brisbane, its outgoing ombudsman (H/T to Althouse):

“… so many share a kind of political and cultural progressivism – for lack of a better term – that this worldview virtually bleeds through the fabric of The Times.”

As a result, developments like the Occupy movement and gay marriage seem almost to erupt in The Times, over-loved and under-managed, more like causes than news subjects. …  A just-released Pew Research Center survey found that The Times’s “believability rating” had dropped drastically among Republicans compared with Democrats, and was an almost-perfect mirror opposite of Fox News’s rating. Can that be good? 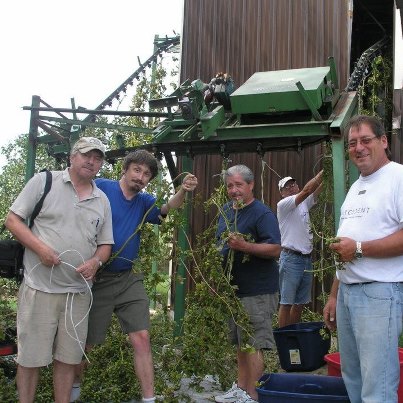 We're stripping Wisconsin-grown hops, a prime ingredient for beer. L-R: David and Max Blaska, Bill Kurt, Patrick LeMahieu, and hops grower John Blaska. We’re standing in front of the stripping mill Dan Schey constructed on his farm between Waterloo and Watertown for their cooperative, the Wisconsin Hop Exchange. The conveyor belt behind us takes the vines into the shed to be stripped of their fruits, which resemble small soft pine cones, by two rows of rotating metal tines.