Will Chicago teachers strike seep into the streets of Madison?

More evidence that teachers unions will fight to the bitter end: Chicago teachers could go on strike next week. Mayor Rahm Emmanuel, the former top aide to Mr. Hope and Change himself, is a “bully,” according to the teachers union. Who knew?

Chicago’s public schools had some of the shortest school days in the nation, five hours and 45 minutes for elementary schools, until the school day was extended to seven hours this school year. “The move added more instructional time for subjects like reading, art, math and science, according to district officials.”

"We don't believe in merit pay," she said.

Even Jesse Jackson is worried. A teacher walkout “will affect street safety. The impact could be disastrous,” he said, according to The Huffington Post.

Imagine 113,000 high-school-age teenagers with nothing to do (although the district is attempting to keep some schools open half days). (Madison public schools teach 24,496 students, elementary and high school.)

Do not think that threat to street safety won’t reach Madison. 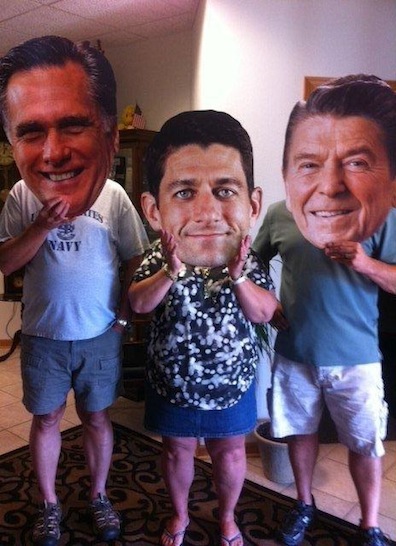 Gary Ellerman says you can get big heads of your favorite Republicans at the Jefferson County Republican Party headquarters in Watertown (308 W. Main St.) for a $22 donation.

Barack Obama is more than an empty chair

He’s also an empty pair of shoes. Remember his campaign promise in 2008 to wear out some comfortable walking shoes on America’s organized labor picket lines? But he couldn’t scuff his blue suedes for Madison’s Siege of the Capitol. Worse, during this spring’s gubernatorial and Senate recall campaigns, Wisconsin was flyover country as far as Air Force One was concerned.

Turns out he’s not the only one who knows which way the wind bloweth. Wisconsin’s Senate Democrats are also running from their record. (Why not? They ran from the state itself 18 months ago.)

In February and March of 2011, crowds of union members and their supporters that at times numbered over 100,000 flooded the streets surrounding the state capitol in Madison, Wisconsin to protest the taking away of collective bargaining rights from public employees. …

Within the past couple of weeks, all the state senators were given an opportunity by The Wheeler Report … to list their top priorities for the upcoming 2013 legislative session. …

The senators' responses can be viewed at the web site of the Wisconsin Association of School Boards.

And where is the national Demo convo being held? Class? That’s right, North Carolina, a right-to-work state.

Is the world spinning out of control? More evidence that education reform is winning: when the teachers union’s allies begin defecting. That would be the Democrat(ic) party.

Meet “Democrats for Education Reform.” Its California branch is headed by a woman. The woman is a Hispanic named Gloria Romero. Ms. Romero is the former majority leader of the California State Senate. Her group is supporting a ballot initiative (Proposition 32) that would prohibit unions from withholding money from worker paychecks to finance political activities. They’d have to solicit volunteer donations like everyone else.

“If we don’t deal with how the beast is fed … and what gives it status and opportunity to run roughshod over the educational lives and futures of 6 million kids in California, then shame on us.”

“The trials of a Democratic reformer” appeared in Saturday’s Wall Street Journal.

Tammy Baldwin says she is going to talk about “the Wisconsin she knows” Thursday night at the Demo convo in Charlotte, N.C. 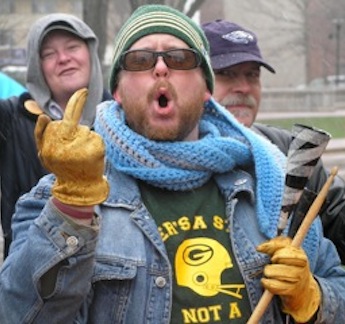 1. Mia Love, an African-American Republican woman, gave a speech and received loud cheers and a standing ovation from almost every single one of the thousands of white Republicans in attendance. (Ann could have mentioned Condi Rice, as well.)

2. Two bozos, of unknown identity, “threw peanuts” at an African-American woman camera operator for CNN, while purportedly saying, “This is how we feed animals,” and were ejected from the convention.

“Furthermore, there is video proof that the first incident (the standing ovation) happened; while the only evidence we have for the damning details of the second purported incident (at least as of the time of this writing) is the word of a partisan left-wing blog.”

Gender gap? What gender gap? "Romney leads by nine among men but is down by one among women." That would be the gender gap the Dems keep touting. So says the Rasmussen poll: Romney 48%, Obama 44%.

• The latest on the Brett Hulsey young wet bathing suit episode (cue Twilight Zone theme): it’s a conspiracy b/w the mayor and the Madison Police. So says prog-Lefty Lukas Diaz after monitoring Hulsey’s rant on the Radio Slymer. When I served with him on the County Board, Hulsey was hell on law and order in order to fund his environmental schemes, so I sincerely hope there isn’t some payback on the part of the police. Even paranoids can be persecuted. His activities at the beach that day showed poor judgment but did not rise to the level of a crime, even a misdemeanor.

• True blue. That’s liberal blogger Zach Wisniewski. “Am I better off than I was 4 years ago? No, but I blame Scott Walker.” (Not George W.) Walker, we remind short-term memory losers, took office a year and one-half ago. However, Zach may have a point. He is still a liberal so, no, he’s not better off.

• I stopped reading at the headline (on the Cap Times website): “Joe Biden gets it.” If you tell me the story involved a cream pie I’ll go back and read it.