What does it tell you that Graeme Zielinski is the spokesmouth of the Democrat(ic) party?

Or that conservatives routinely get anonymous threats left on their car windshields and email inboxes?

Or the way to counter Rep. Paul Ryan’s budget reforms is to portray him pushing granny’s wheelchair over the cliff?

Here, in this home of a major research university, the self-referenced voice of Progressivism runs an editorial entitled, “Wisconsin’s April Fools’ Day senator.”

Sure enough, it’s another partisan hack job at Sen. Ron Johnson replete with name-calling (“a comic figure”) and unsupported charges (“virtually invisible”), never mind that the man has made more waves in 16 months than Herb Kohl did in 24 years. Johnson’s sin occasioning this diatribe? The man endorsed Mitt Romney for president. Seriously.

The Capital Times piece is an online tantrum that presents no facts and makes no argument. It’s a blowtorch of heat without illumination, the triumph of snark over reason, a black hole that sucks away thought and leaves only the involuntary twitching of a dead frog’s legs. (A little gross, yes, but fascinating!)

I guess we could call it “Wisconsin’s April Fools’ Day editorial page.”

(Just so I say something good about my old alma mater once in awhile, read Master Jack Craver’s “The Walker appeal” for a good read and an example of what can happen when one actually, you know, talks to conservatives. And listens.) 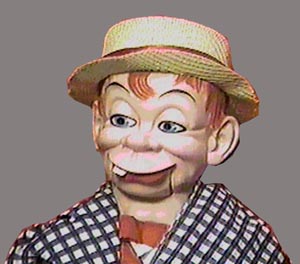 After Reagan insisted that democracy should defeat Soviet totalitarianism, our friends on the Left settled for unilateral intellectual disarmament. That explains their hostility to the American Legislative Exchange Council, the Heritage Foundation, the CATO Institute, etc. Outgunned by all that conservative intellectual firepower, they cry “Faux News” and “Koch Brothers” when confronted with new ideas.

So, thank you to Jennifer Rubin of The Washington Post (hat tip to Kevin Binversie at Lakeshore Laments) for “The Closing of the liberal left’s mind”:

“In sum, the left systematically has dumbed its side down, to the point where supposedly well-educated elites are untrained and unaware of our country’s history and constitutional traditions. …

“Liberal elites have a poor grounding in market economics so they swallow the idea that health-care insurance is ‘unique’ because others’ purchases affect your cost of goods. (Surprise: all markets operate this way.) They advance illogical and counterfactual arguments (e.g., withdrawing a 100 percent subsidy for health care to seniors is a ‘mandate’) because they are unused to vigorous debate that upsets their preferences dressed up in a thin veil of factual distortion. ….

“In short, what [Alan] Bloom [author of The Closing of the American Mind] spotted more than two decades ago and what NAS documents today is the unilateral intellectual disarmament of liberal elites.”

Similarly, the race hucksters are fanning memories of the old Jim Crow south in the Trayvon Martin killing in Florida. Their goal is fresh ammunition (sorry) for their cherished cause of disarming all of us NASCAR-driving racists who cling to our guns and religion.

A compliant news media even doctored the transcript of the 911 tape to make it seem that George Zimmerman had volunteered the victim’s race, instead of merely responding to the emergency center’s inquiry.

Amply endowed with melanin himself, Shelby Steele, senior fellow at Stanford's Hoover Institution (oh, for its equivalent at UW-Madison!) neatly demolishes the racist victim line of attack. This is excerpted from his essay in the April 5 Wall Street Journal:

“The absurdity of Jesse Jackson and Al Sharpton is that they want to make a movement out of an anomaly. Black teenagers today are afraid of other black teenagers, not whites.

“Before the 1960s … race was always an artificial and exploitive division between people. After the '60s … we took our historical victimization as the central theme of our group identity. We could not have made a worse mistake. It has given us a generation of ambulance-chasing leaders, and the illusion that our greatest power lies in the manipulation of white guilt.”

The state teachers union, all-in for “The Kathleen” Falk and her union-first platform, is sandbagging Wisconsin voters by refusing to release data showing that Scott Walker’s reforms are not harming public schools. Kudos to the Wisconsin State Journal for reporting:

"It's unfortunate that WEAC stands in the way of survey data that they have released in the past, which shows the governor's changes are working and are good for their members and the state's schoolchildren," said Cullen Werwie, Walker's spokesman.

The governor’s people managed to locate WEAC’s numbers for previous years anyway and compared them with a study conducted by the WI Association of School Boards for the current, 2011-12 school year. (If WEAC has different numbers they’re not saying.)

• In previous years, over half the school districts said they reduced sports and extracurricular programs. Only 11% did so this year.

As those who sieged the Capitol a year ago might say, “Shame, shame, shame on WEAC!”

Where would the liberal-progressive mindset be without a) the cult of victimhood, b) pervasive racism, and c) income envy?

In Madison, Milwaukee, and many other metro areas, well-compensated public school teachers have convinced themselves that all that lies between them and the Triangle Shirtwaist sweatshop is Big Labor bullying a benighted electorate. Middle-class teaching professionals as victims.

(On that score, see the Recall WEAC interview with WISC-TV3.)

Partisan judges in Dane County? Say it ain’t so!

The Wisconsin Club for Growth says Madison-based Judge Wm Conley, who ruled that the state must collect union dues, was a longtime campaign contributor to such Democrats as Jim Doyle, Kathleen Falk, and Supreme Court liberals like Shirley Abrahamson and Louis Butler. All done as a lawyer in private practice and, therefore, legal.

“What really caught our eye was a July 28, 2011 contribution to Sandy Pasch in the 2011 recall election against State Senator Alberta Darling,” made 16 months after his confirmation as a federal judge in apparent violation of judicial ethics (see Canon 5).