The headline has nothing to do with Monday’s NCAA Division I men’s basketball championship game.

It has to do with the April Fools’ joke the federal government pulled on us Sunday. As of Sunday, the U.S. has the highest corporate income tax rate in the world.

Even the Obama administration thinks number one in the world is too high, reports the Wall Street Journal:

A few weeks ago President Barack Obama made the political ceasefire official, proposing a roughly 20% cut in the top U.S. corporate rate, to 28% from the current 35%, and promising a further drop for manufacturers. In Iowa this week at a campaign event focused on manufacturing, Vice President Joe Biden even brandished the administration’s proposed rate cut as a political weapon of sorts. Not that anyone is fighting.  …

Republicans have been calling for corporate tax-rate reductions for a long time, and generally advocate a somewhat deeper cut in the top rate, to 25% (approximately the average rate of the main U.S. trading rivals). …

What’s prompted the unlikely burst of bipartisanship? Basically, there are two reasons.

First, the Obama administration has zero political interest in going into the 2012 election season trying to defend a corporate rate that is the highest in the developed world, particularly with U.S. jobs still in short supply.

Second and more important, grownups in both political camps have come to the realization that top tax rates really do matter. Despite the deductions, deferrals and other breaks that can drive down effective rates for individual companies and industries – particularly after a big recession – it’s the statutory top rate that really shapes business investment decisions. And attracting new investment to the U.S. is the name of the game.

“Top rates really do matter”? What a revelation. Here we’ve been told by those who think that taxes are not too high that whatever the rate is really doesn’t matter because of tax deductions, credits, rebates, etc. Which ignores the fact that getting those tax deductions, credits, rebates, etc., requires a company to either employ someone to find them, or hire a company to find them. The cost of compliance with tax law is an additional tax, just not paid to the feds; you’ll either pay your tax professional or the feds. And as the next-to-last sentence says …

Apparently someone from the Obama administration can read charts, such as this one from the Tax Foundation: 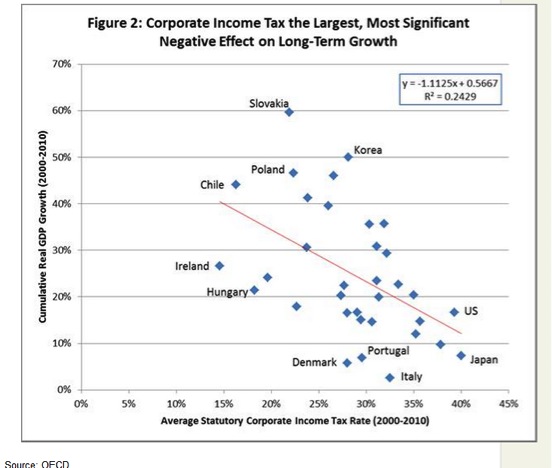 Note where the U.S. and Japan are on the chart. Japan is the country whose corporate income tax cuts took effect Sunday, putting the U.S. at the top of a heap you don’t to be on top of.

So why should you be skeptical? First, you should always be skeptical of politicians, regardless of party. Second, it’s an election year, and if it’s true that haste makes waste, election-year haste makes a mess. (All the Bush tax cuts and others expire Dec. 31, the result of a deal made in November 2010.)

Third: Why do manufacturers deserve a bigger tax break than any other business? Not only do you have to ask Obama, you have to ask Republican Rick Santorum (who by the way became on Monday the first GOP presidential candidate to visit the Birthplace of the Republican Party since George Romney came to Ripon in 1968), who also favors a manufacturing tax cut. The fact is that all business taxes are too high, not merely taxes on manufacturers. In addition to picking winners (manufacturers) and losers (all other businesses), a manufacturing tax cut fails to recognize where business growth is occurring, which is not necessarily where those in Washington think it should occur. (See “green energy.”)

The other sticky detail is the role of state governments, especially Wisconsin, which, unlike most countries, add income or gross receipts or similar taxes on top of federal income taxes. While the Tax Foundation ranks Wisconsin fourth best in taxes for new businesses, Wisconsin ranks 35th in taxes for “mature” businesses. Wisconsin has more “mature” businesses than new businesses. Any state politician, particularly a Republican, who claims the state has a good tax structure for business is, to put it charitably, mistaken.