Waffles again? What the recency effect can tell us about investing during COVID

Every morning my son has Eggos. Cinnamon toast flavored. Every morning. I can’t imagine eating the same thing that I ate yesterday. I suffer from a behavior all too common to many — the recency effect. I feel the same way about leftovers. If I ate it yesterday, I don’t want it today.

In some cases, the recency effect creates the opposite reaction, as in my son’s case. If he liked what he had yesterday, why would he change it? Yesterday was good, so why not do the same thing today? He wants more.

While your breakfast philosophy doesn’t matter as much, investors have to be cautious about the recency effect for many reasons. Let’s examine a few after defining this effect further.

Richard Thaler, a University of Chicago professor and winner of a Nobel Memorial Prize in Economic Sciences, has studied and written extensively on behavioral finance. This field explores the effects of human behavior and decision-making on finance and financial decisions. It teaches us about how our brain works to make decisions. In the world of investing, this is an important subject, as markets are ruled by emotion. The amount of information affecting asset prices is almost unlimited. The amount that matters, however, is most certainly finite, in part because what matters most are a company’s revenue growth and earnings.

The recency effect can be described as our desire to project what has happened most recently well into (most often too far) the future. If the waffles were great yesterday, they must be great today.

If Tesla’s stock is up 260% in the last several months, then it must continue to go up at the same pace. If the presidential polls were wrong last time, they must be wrong this time. If the economy is weakened by a pandemic, it will never get better.

The chart below provides a picture of Tesla’s stock price since the first of the year. As you can see it has risen dramatically; the chart pattern reflects a parabolic move. 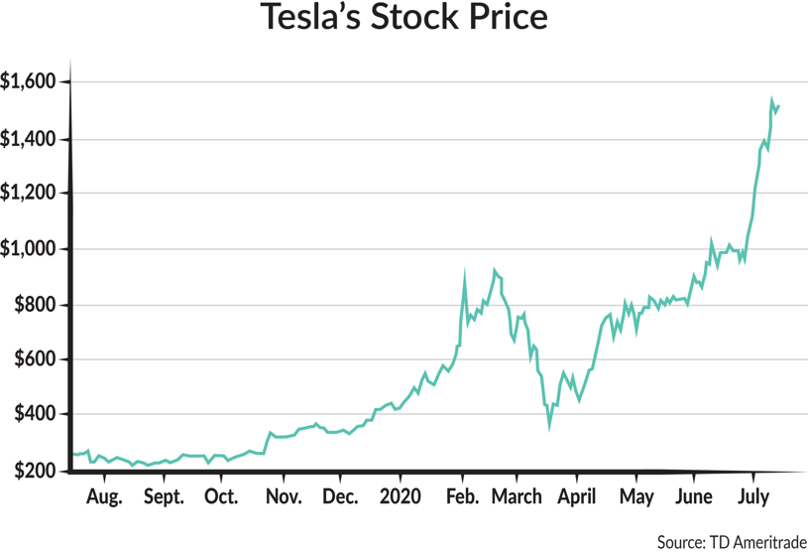 For perspective, Tesla sells 300,000 cars annually, and it doesn’t really make money doing it. Ford sold 900,000 F-150s last year. And most auto manufacturers have access to similar electric technology. Yet the value of Tesla is more than the combined value of GM, Ford, and Fiat Chrysler! Have the fundamentals of the car company changed so much since April that it is worth almost four times what it was then?

Of course not. However, investors like to put money into something that is working — not based on fundamentals but recent price action. If a stock’s price is rising, it is expected to continue to rise. This is “momentum.” You can see from the chart below that momentum stocks have been doing very well, especially against more traditional value (as in less expensive stocks) investing. Since the beginning of the year, the momentum exchange-traded fund (ETF) is up 10% (red line) while the value ETF (purple line) is down 20%. 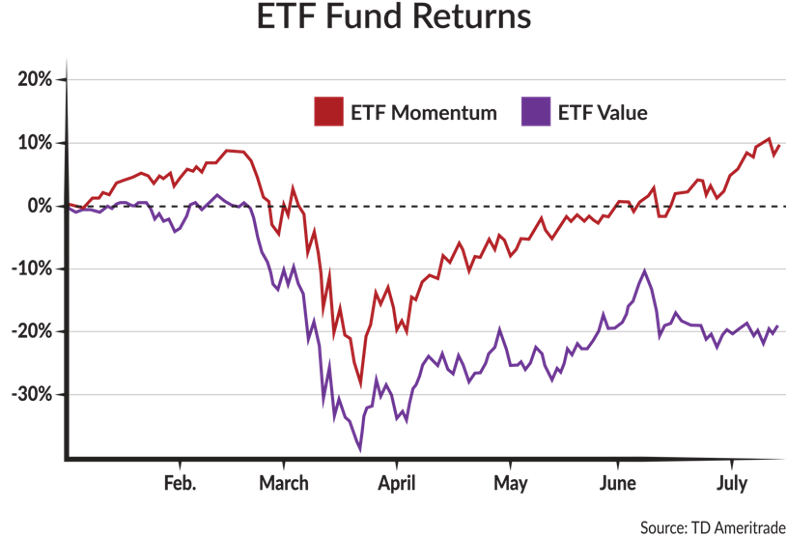 The Cornerstone Macro chart below provides a very long-term view of this (back to 1926). You can see that we are at an extreme, which has accelerated in the last several months. 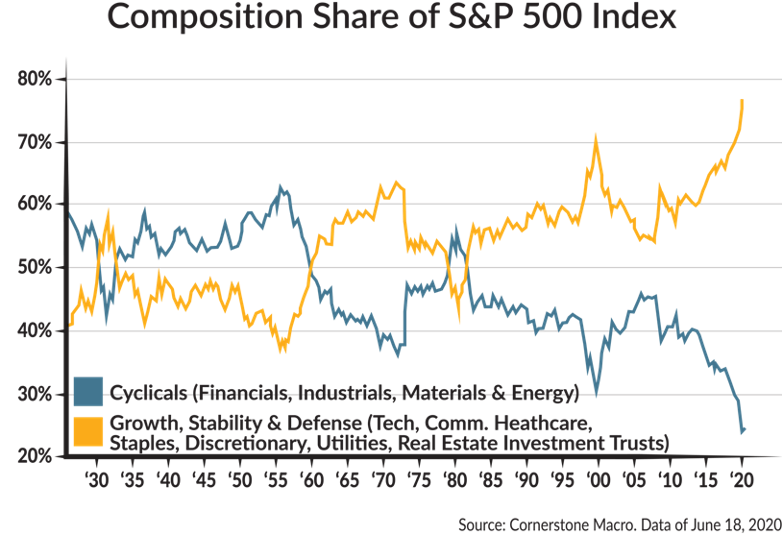 From our perspective, we want exposure to those areas of the market that haven’t done well, while owning less and less of those growth elements of the market fueled by investor sentiment and momentum.

The election cycle has moved front and center, alongside the pandemic. As investors, we need to understand the probable outcomes of the election and the potential for change in fiscal and regulatory policy. The recency effect may cause us to conclude that the polls don’t mean anything because they were wrong last time. More likely, they were wrong in the most important places. President Trump won the electoral college by taking several states, primarily in the Midwest, that his opponent didn’t think he’d have a chance in. Polling is adjusted for what it got wrong and so may be more relevant today.

Another challenge with the recency effect is we put too much stock in what polls are telling us. We know that it is too early to take them at face value. We’d rather understand the key policies of the administration on fiscal matters, such as pandemic stimulus and taxes, as well as foreign affairs versus the probable Democratic nominee. We’ll get sound bites in August from both platforms that will help determine where the most significant differences are. We can then begin to quantify what that means for fundamentals and asset prices.

Of course, the economy has been hampered by the pandemic at unprecedented levels. It is probable that the second quarter will see over a 20% contraction in economic growth. The recency effect causes us to predict that this weakness will continue too far into the future. The reality is that even though we are seeing an uptick in positive cases that will lead to a wave of restrictions and slowdowns, we aren’t likely to see the same depths of closure we saw in March.

More importantly, while we’ve seen tremendous damage to the labor market, especially in the hospitality and travel industries, there are many bright spots. Other parts of the world are reopening and, as a result, we’re seeing an industrial recovery.

Technology capital expenditures likely grew by more than 6% during the second quarter as many companies looked to operate more efficiently in the face of slower revenue growth.

While we can’t be certain about the shape of the recovery, we can be certain that there will be one. We can measure the stimulus measures taken by governments, their effects on economies, and sentiment. Using this information we can track the shape of recovery.

Some say adversity is the mother of invention. I know our entire wealth team is working effectively together, meeting with clients, and innovating how we do business as a result of the situation created by the pandemic.

And, without my daily commute, I have time to enjoy some waffles with my son … just not every day!

Good times or bad, innovative business ideas can take off

The digital buyer’s journey — How to nurture your potential clients

Power of undergraduate research being felt in Wisconsin economy