‘Twas the day before the Wisconsin recall election

And all through the state, not a creature was neutral; skullduggery was afoot, intimidation in the air. Folks, check the bulbs in your outdoor motion-detector floodlights tonight and keep the dog hungry!

“A sign of our Orwellian future” – That’s what my friend Isaac Parker at Wisconsin 9/12 Project calls the large-format postcard he received on Friday from Greater Wisconsin Political Fund, a Democrat/union front group. The mailing detailed whether he and his family member voted in the last two elections and the voting records of 12 neighbors on his street.

“Outrage, is how I feel. … This mailing did not arrive in a sealed envelope; instead it’s a large postcard, readily available for any and all to see who voted and who did not. The section above the table contains the ominous wording; ‘Who votes is public record!’ and then, at the end, ‘After the June 5th election, public records will tell everyone who voted and who didn’t.’

“The meaning is quite clear and threatening – we don’t know who you voted for, but if you didn’t vote, we know you did not support Tom Barrett. … Not only will your liberal neighbors know you did not bother to cast a vote for Tom Barrett, your union coworkers will know as well. Your friendly neighborhood union thugs will know, too; expect them to visit you soon.”

“This is an effort to shame and pressure people about voting, and it is truly despicable. Your vote is private, you have a right not to vote, and anyone who tries to shame and harass you about it is violating your privacy, and the assumption that I will become active in shaming and pressuring my neighbors is repugnant.”

“Are they trying to engender support by shaming people using public data? … Remember last week when the Left had a collective aneurysm over a taxpayer group publishing Janesville teacher salaries in the local newspaper? Those same salaries that are public information? I anxiously await their condemnation of this aggressive use of public voter data.”

The Siege of the Capitol, the death threats, boycotts, chanting and name-calling? This recall has always been about intimidation, not democracy. 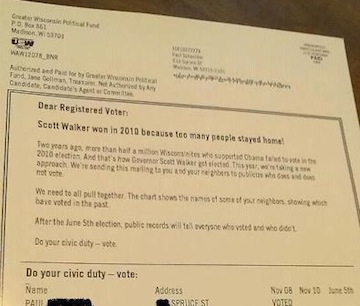 Scrambled facts: What does it say about a political campaign that falsified a record to the extent the Democrats have? You’ve heard the one about Gov. Walker supposedly cutting public school funding by $1.6 billion while giving “his cronies” in Big Bidness $2.3 billion in tax breaks.

PolitiFact notes that the actual the state cut its contribution to K-12 school districts by something closer to $800 million – half the stated amount. An amount easily made up by asking our teachers to pay something toward their retirement and health benefits. Regarding the tax cuts, that $2.3 billion is the figure over 10 years.

As for the “corporate tax breaks”? In the current two-year budget, the tax breaks are projected to amount to $212 million, according to the fiscal bureau.

How low can they go? Now the Left is peddling the story that Scott Walker fathered a child out of wedlock at Marquette University. Turns out, wrong Scott Walker, reports Brother Wigderson. (“How disgusting and low will the Democrats go?”) Reminds me of the taunt aimed at Grover Cleveland: Ma, ma, where’s pa? After his election, his supporters retorted: “Gone to the White House, ha ha ha.”

“We don’t speak ‘code’ out here ‘around the state.’ So when Walker said ‘we don’t want to be like Milwaukee,’ we thought he was referring to the fact that the rest of Wisconsin, unlike Milwaukee, does not dump millions of gallons of untreated sewage into their water supply.

“We thought of teachers unions throughout the state that were willing to make contract concessions rather than see hundreds of their colleagues laid off, unlike the Milwaukee teachers union.

“We thought he was referring to Wisconsin cities with a lower unemployment rate than Milwaukee. Or … cities that don’t see massive tax hikes year after year.”

Sunny’s post is (as usual) the best of the Milwaukee Journal Sentinel’s “Purple Wisconsin” blog bazaar.

Wings over Milwaukee – Tom Barrett should be glad that Barack Obama came no closer to his rally Friday than dipping his wings as he flew over Milwaukee on his way from Chicago to the Twinkie Cities. Not after the truly disastrous job numbers announced Friday, the increase in the unemployment rate, and the stock market’s 275-point nosedive.

We have given Barack Obama three and a half years to fail; we gave Jim Doyle eight years to fail. We’re having a recall election of Scott Walker only 18 months after he was sworn into office and every indication is that he has succeeded. Budget balanced; unemployment rate down to 6.7% from over 8%; 33,000 more jobs; first property tax decrease in a dozen years; schools teaching, students learning; driver’s and hunter’s licenses being issued without interruption.

Little-known fact: Scott Walker got 37% of the union vote the first time around and looks like he’ll get 38% of the union vote on Tuesday, if the Marquette Law School poll is correct. (Tommy G. got 48% of union vote in his last try in 1998.) Craig Gilbert in the J-S explicates. Makes one wonder why nearly 100% of the union dues spent on politics goes to Democrats. 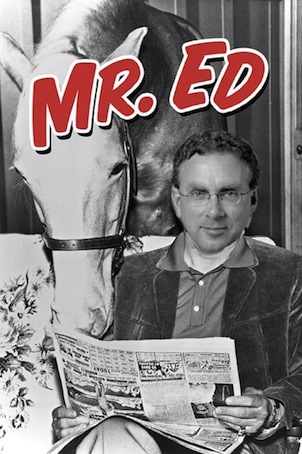 The Mr. Ed Show is coming to Wisconsin Tuesday with John Edwards fanboy John Nichols. Must watch TV if you enjoy vitriol, second-guessing, scapegoating, and general gnashing of teeth! And who doesn’t?

Unfortunately, polls close at 8 p.m. just as Ed and sidekick John are signing off. Here’s Mr. Ed’s campaign schedule on behalf of Tom Barrett. And they criticize Fox News for partisanship?!

No surprise here: National education “expert” Diane Ravitch was a ballyhooed speaker at a UW-Madison School of Education symposium last year. Reason: Ravitch is a last-ditch supporter of the unionized, public school education monopoly. UW-Ed has no room for the Joel Kleins, Howard Fullers, Davis Guggenheims, Geoffrey Canadas, and other proponents of education reform. No debate allowed at UW-Ed.

On election eve, the partisan Ravitch joins with the unionized teachers who walked out on their classrooms to write, in the Milwaukee Journal Sentinel, For the Sake of Public Education, Walker Has To Go! Typically, she offers no prescription for the future, no defense of public education’s past failures, only cant and victimhood. She also appeared on Mr. Ed’s MSNBC comedy-variety show Friday.

Courage is on the ballot – Saw South Carolina Gov. Nikki Haley and got some face time with Gov. Walker Friday evening at the Sheraton Hotel in Madison.

Turns out that Nikki and Louisiana Gov. Bobby Jindal, who also campaigned in Wisconsin last week, telephoned Walker during the dark days of the Siege of the Capitol last spring to offer much-needed encouragement. (Both happen to be Indian-Americans.)

Like Walker, Gov. Haley is in her second year as governor. She had been an up-and-coming state legislator until she demanded roll call votes on things like pension increases. She was stripped of her committee assignments and influence. “The only thing left for me to do was run for governor,” she said, to the approval of the crowd.

“Now it’s time to get Governor Walker’s back.”

But not in the State Journal – Two days before the second most important election of the year, The Wisconsin State Journal (usually a quality newspaper) leads its Sunday opinion page with this cri de coeur: Hire more black teachers. (Coming soon: Eat more vegetables.)

Opinion page editor Scott Milfred tells me, “Dave, our editorial board has consistently opposed all of the many recall attempts against Democrats and Republicans over the last year. We think all of the duly elected incumbents deserve to serve out their terms. This recent editorial provides more detail. During regular elections we meet with all of the major candidates and issue formal endorsements. We haven't done and aren't doing that with the recall elections.”

Risk averse — What hurt the most in that Milwaukee Journal Sentinel editorial Sunday before last, besides the endorsement of Scott Walker itself, was its verdict that Tom Barrett is “risk averse.” Are great leaders “risk averse”? Was George Washington risk averse at Valley Forge? Winston Churchill during the Battle of Britain? Pope John Paul II holding Mass in Warsaw in the shadow of the Iron Curtain? Ronald Reagan (and, earlier, JFK) at the Berlin Wall?

One example: Tom Barrett criticizes Scott Walker on job creation without making a single attempt to sway a single state senator in Milwaukee – home to two major manufacturers of mining equipment – to vote for the GTech mine. (What, iron mining in Iron County?!)

Better than any campaign commercial is the MacIver Institute’s “Mine Shaft,” which details the Democrats’ strategy to deny the Walker administration a victory on the job creation front, even though it meant condemning the Northland to a bust and bust cycle of unemployment. It is 30:23 minutes.