This just in. The Nation magazine has endorsed Tom Barrett for governor.

Now, this is unusual because The Nation magazine does not endorse political candidates. Probably for the reason that there are so darn few that meet its exacting standards of a centrally directed, planned economy and Greek-style welfare system.

I found this in my in-basket this morning:

Back at you, Peter. 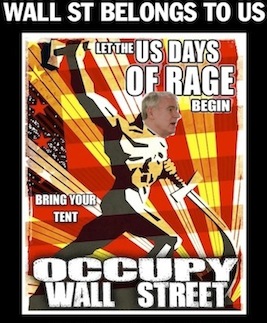 Can we expect Mayor Barrett to embark on a statewide tour trumpeting this coup of an endorsement? (Bring your tent!) Why, the Democrat(ic) candidate may soon venture to Madison. Okay, maybe not Madison. Is Monona close enough?

The Nation is the cynosure of American Leftism. In addition to Comrade John, its pages are bursting with the exploding synapses of Eve Ensler (The Vagina Monologues), Michael Moore, Robert Reich, Bob Herbert, William Greider, Tom Hayden, and Ms. Katie vanden Heuvel herself.

Its heroes are the likes of Dennis Kucinich, Israel-hater Noam Chomsky, Jesse Jackson, Hugo Chavez, fake Indian Ward Churchill, and whomever is fighting the U.S.

For a few months, the magazine was positively ga-ga over the Occupy Wall Street movement, its hoped-for antidote to the Tea Party. Zucotti Park was its Tiananmen Square and Bunker Hill.

My search of “Occupy Wall Street” in The Nation brought up 780 articles since last fall. My favorite headline: “Emma Goldman Occupies Wall Street.” (The old anarchist must be pretty ripe by now but, given the squalor of Zuccotti Park, it probably went unnoticed.) Second favorite: “Capitalism vs. the Climate.” You can’t make this up. (Even if they did.)

Its apotheosis was May 1 – May Day for all you international socialists. Unfortunately for “the struggle” (Leftists are always struggling) May Day in Occupy Land was more of the same: busting windows, preventing workers from getting to work, F-bombing, police-baiting, sexual assault and disease. Trashing a TV news van in Oakland didn’t help, either.

Look at the magazine today; see if you can find a single mention of the Occupy fiasco. Time to move on, as they say.

You history majors may want to get up to speed on The Nation’s favorite “progressives” of the 20th century.

Number one is Eugene Debs, a self-outed socialist. Also ranking high is acknowledged communist Paul Robeson. (He was a great singer, but so what? The fascist Ezra Pound was a great poet.) Then there’s Izzy Stone, identified as a communist spy by eminent historians (see The American Spectator). Also on the list: Upton Sinclair, Henry Wallace, Norman Thomas, Lincoln Steffens (who infamously visited the Soviet Union, said he had seen the future, and that it worked), Woody Guthrie, Pete Seeger, Tom Hayden, and Barbara Ehrenreich.

And now, Tom Barrett, who is sure to make the A-Team for Progs of the 21st century. So The Nation has gone for Barrett, even if Wisconsin won’t. Congratulations, Tom!

• If you’re still quibbling over the job census showing 23,000 jobs gained during 2011, please be advised that it was prepared by civil servant Dennis Winters, head of the Office of Economic Advisors at the Wisconsin Department of Economic Development. Winters, BTW, signed the recall petition. (HT to the Heritage Network.) I know Dennis; he’s no Republican!

• My friend Dave Zweifel begs state government not to turn to 401(k) retirement accounts from its current system of a defined benefits pension. But what do The Capital Times, Inc. and Capital Newspapers, Inc. offer their employees? You guessed it.

• Hey kids! Send Democrat(ic) party boss Mike Tate the bill for $16 million that it’s costing us taxpayers for these worthless recalls. Copy the billing statement here and e-mail to MikeT@wisdems.org.

Burglary on the menu at sandwich shop