Today is D-day* in Wisconsin (*Democrats’ desperation in defeat)

I see Scott Walker and Rebecca Kleefisch prevailing in their recall elections today by, respectively, 4% and 5%. I predict all four state senators up for recall will also win; Van Wanggaard in Racine will be the closest, but he survives by 2%.

The always marvelous George Will asks:

“The emblem displayed at some anti-Walker centers is an outline of Wisconsin rendered as a clenched fist, with a red star on the heel of the hand. Walker’s disproportionately middle-aged adversaries know the red star symbolized murderous totalitarianism, yet they flaunt it as a progressive ornament. Why? (“Wisconsin’s Peter Pan progressivism”) 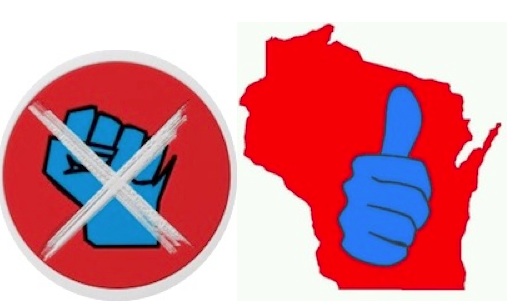 • State Sen. Leah Vukmir said on Up Front to Vicki McKenna Monday evening that Tuesday’s election will mark the end of progressivism in Wisconsin. Whatever was good about progressivism – and the current Blue Book article is hagiography – has long gone sour when special interests saw government as a sugar daddy except when, as in Bloomberg’s New York, its experts aren’t using the coercive powers of the state to reform the ignorant hoi polloi.

• Now more folks than ever can access the small nuggets of wisdom contained in Blaska’s Bring It! thanks to Politics In Stereo.

That would be me, friends. Also representing Wisconsin from the Right is struggling young writer Christian Schneider. (Won’t someone please give the poor fella a break?)