The end of the world

R.E.M. initially released its single “It’s the End of the World as We Know It (and I Feel Fine)” in 1987. The refrain line has since become part of our nomenclature for describing various seismic shifts in our world. When it comes to transportation, this expression is extremely apropos in 2013, thanks to a lot of innovators – some from Wisconsin.

Take a look at a couple of the exciting things Wisconsin-based companies are doing and the tremendous impact they will have on the transportation world.

Kwik Trip began as a small corner gas station in Eau Claire in 1965. By 1986, the company had 100 stores; in 1990, it had 200 stores; and now it has more than 400. It has not grown like this by standing still, and it certainly isn’t in a defensive posture today. Kwik Trip has vertically integrated – producing or handling 80% of the items sold in its stores. And now? It is moving full steam ahead with a natural gas program.

Kwik Trip has committed to developing functional natural gas infrastructure in Wisconsin, Minnesota, and Iowa. Here are the locations of its current and planned natural gas retail fueling stations:

I am not going to get into the differences between compressed natural gas (CNG) and liquid natural gas (LNG) in this blog (I am not Bill Nye the Science Guy). Suffice it to say, Kwik Trip is involved in both. You can find out more about the difference here.

So while we hear a lot of talk about cleaner-burning alternative fuels, Kwik Trip is putting its money where its mouth is. As far as the environmental impacts, the argument is compelling. Natural gas can result in up to a 90% reduction of emissions and 27% less greenhouse gas emissions. When it comes to our dependence on foreign oil, the argument becomes even stronger. According to Kwik Trip, we have a 100-plus-year supply of natural gas right here in the good ol’ U.S. of A. Ninety-eight percent of the natural gas used in the U.S. is domestically produced. At the same time, we import more than 47% of the oil that we use.

But is it practical? Kwik Trip sure thinks so. According to Chad Hollett, Kwik Trip’s director of transportation and distribution, "We not only supply the fuel, we use the fuel. We have 400 vehicles ranging from cars to Class 8 trucks, and we're making the move toward natural gas in our own fleet. Today we have 20 natural gas vehicles in operation with more coming."

"We have a vast supply of natural gas and it's well documented," Hollett says. "Since oil is a global commodity and price and availability is influenced by world conditions, prices will always be in flux, but on the whole, will only go higher. Compare that to our own supply of domestically produced natural gas and we have control over our own destiny. To us, that makes sense, and it's why we think of LNG and CNG as the fuel of the future."

And while the gas we are used to putting in our cars – petroleum-based – has been fluctuating between $3 and $4 a gallon, natural gas has remained pretty constant around $1.60 a gallon.

Now that doesn’t mean that you and I are going to be pulling into a station and filling our cars up with natural gas in the near future, but for fleets that have a repetitive route or return to base operations, the return on investment to switch their vehicles can be substantial.

Then there is Johnson Controls, the world’s leading supplier of lead-acid batteries. Johnson Controls, Inc. was started in 1885 in Milwaukee by Warren Johnson, inventor of the first electric room thermostat. Today, it has more than 1,300 locations worldwide. Johnson Controls is introducing a new battery system that combines lead-acid and lithium-ion batteries to boost gas mileage and reduce CO2 emissions. The 48-volt micro hybrid demonstration module was presented during the recent North American Auto Show. This technology has the potential to increase fuel economy upwards of 15%-20%, and the company believes it can price it at a level that car buyers can afford. Once again, I am not Bill Nye, so if you want to find out more, go here .

Because of this and other innovations, the Obama administration and the 13 large automakers reached an agreement in July of 2011 to increase the federally mandated average fuel economy standard (commonly referred to as the CAFE standard) to 54.5 miles per gallon for cars and light-duty trucks by model year 2025.

So why is it the end of the world as we know it when it comes to transportation financing? Because the way Wisconsin and the federal government fund transportation is largely by charging users a fixed amount per gallon (30.9 cents and 18.4 cents, respectively). The revenue from the per-gallon gas tax is used to fund the maintenance and reconstruction of our transportation system. As fuel efficiency continues to improve so that we can travel two and three times as far on a single tank of gas, the amount we pay in user fees drops by the same amount. If you are using an alternative fuel or energy source, it all depends. CNG and LNG are taxed by the state and feds through a formula that roughly approximates the traditional gas tax, but historically, we have not treated alternative fuels uniformly. And no system exists to collect user fees from drivers of electric vehicles.

Innovation is great, but we can’t maintain our infrastructure with magic beans.

In transportation circles, this conversation is certainly not new. There have been scores of studies clearly outlining the problem. It really isn’t that hard to get your head around. In the short term, we need to adjust the gas tax. In the longer term, we will have to either: a) find another way to charge for system use that comports to today’s realities, b) get rid of the user fee concept and fund transportation out of the same pot as Medicaid and schools, or c) allow our transportation assets to fall into disrepair. Those are the choices. It’s pretty simple.

The problem is, while we applaud innovation in the private sector, we violently resist any efforts to modernize how we fund transportation. Why? Because we’re certain the new idea is a Trojan horse in which hordes of bureaucrats itching to pick our pockets lie in wait. While a healthy dose of skepticism toward government is very American – and healthy – we still need to at least look at the facts and not just knee-jerk our way into paralysis.

We don’t even need to go all the way back to when R.E.M. was singing about the end of the world to remember when gas was hovering around a buck a gallon. That’s what it cost in 1993, the first full year Brett Favre started for the Packers. If you were like me in 1993, you had more hair, less belly, and were continually inspired by Cliff Clavin’s insights into the meaning of life. Whether or not that rings true, you were paying about 41 cents out of that dollar per gallon on state and federal gas taxes. Today you are paying around $3.60 a gallon, and state and federal gas taxes account for about 51 cents of that. Despite what I hear from many, the gas tax is clearly not to blame for today’s higher gas prices.

Issues like increased fuel efficiency and alternative sources of fuel are, of course, good things. Progress just means we need to adjust with the times. What would this country look like today if people would have just blown off President Eisenhower’s grand plan to connect the country via an interstate system and pay for it with a user fee – the gasoline tax? Our approaches have to match the times. What worked in Sam Malone’s day doesn’t necessarily work today. I mean, Ted Danson is now on CSI for crying out loud.

We always hear people lament the fact that government doesn’t face up to issues and make decisions like the private sector does. In this case, that is certainly true. No business owner would slash his or her prices in half while the wholesale cost of the product increased. The problem is that we voters often are the impediment to change. Modernizing our systems or how we fund them doesn’t have to be a euphemism for “they are trying to find a way to screw me.” Modernizing how users of our transportation system fund it – at commensurate levels with how we have historically – seems reasonable, especially when most of us understand that our transportation network moves our economy.

I had the privilege of being appointed to a commission established by the governor and Legislature that was charged with making recommendations on how to fund Wisconsin’s transportation system over the next decade. The 10-member commission issued the report on Jan. 23. You can read the full 162-page report if you are a glutton for punishment, or you can look at the eight-page summary here. The report has a lot of recommendations on how to do business differently and more efficiently. Of course, what has grabbed the headlines is how we propose to fund the system moving forward. Things like adjusting the gas tax in recognition of improved fuel efficiency or charging based on miles driven have certainly spurred headlines and reaction. That is to be expected.

So I ask this. Have an open mind. Embrace change not just in the private sector but in our public sector as well. Hold government accountable, but don’t just say “no” as a reflex.

You may remember another line from this R.E.M. hit. After declaring it’s the end of the world as we know it, the group goes on to sing, “Offer me solutions, offer me alternatives and I decline.” I hope that isn’t as apropos as it appears today.

If you want a much more succinct and graphic way to view the changing nature of the challenges I have just blathered on about, check out our most recent Big 10 Transportation Truth – Because You Can’t Meet the Future Standing Still. This is the third in the series on the gas tax. Make sure to also check out Transportation Truths 3 and 4. 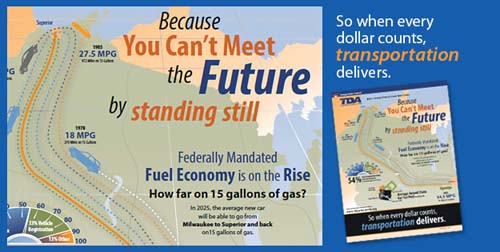