The Democrats must pay for this recall! Send them the $16 million bill!

Blaska’s Bring It! is lab-tested, mother-approved.

Where in the world is Tom Barrett? Not in Madison, Wisconsin’s second-largest city.

After Tuesday’s Democrat(ic) primary, Blaska’s Bring It! asked when was the last time a Democratic politician for statewide office refused to campaign in Madison. The answer: “Wednesday,” the day after the primary, when Barrett famously blew off a planned, and announced, unity rally set for the Capitol.

Does Tom Barrett have any plans to set foot in the People’s Republic of Madison?

We asked his Dane County campaign office yesterday and they answered, “We do not have any information regarding that.” We called the Milwaukee state headquarters; they suggested they would get back to me. They took my name, meaning they won’t.

Barrett’s campaign website lists only events on May 22 in La Crosse and May 29 in Green Bay. (That’s a torrid pace, Tom. Slow down and live!)

WisPolitics lists no events anywhere in Dane County. Sing it with me: Where have you gone, Mayor Tom Barrett? Pink Dress Guy, Anarchy Man, Segway Jeremy, and Comrade Nichols turn their lonely eyes to you, woo woo woo.

So the Democrats have their recall candidate, just no plausible rationale for the recall itself. Collective bargaining? Barrett is not talking about it. Even Mr. Ed on MSNBC admits CB polls bad. This week’s Marquette Law School poll says voters like the Act 10 reforms by a 50%-43% margin.

Job losses? Not so much. Turns out the monthly BLS establishment figures are only a survey of 3.5% of employers. The actual jobs census, which accounts for 96% of employers, records an increase of 23,321 jobs for the last quarter of 2011 while our unemployment rate is the lowest since 2008. Unemployment claims are down, income is up, the budget is balanced, school is in session, the Packers had a good draft.

Once again, it’s time for “Democrats [to] shift tactics” (according to the Wisconsin State Journal). Look over here! Let’s focus on the John Doe probe of former Milwaukee County staffers. The Dems don’t want you to know that it was Scott Walker himself who called in the authorities when he realized something was wrong. Do you think he’d do that if his hands were dirty?

Or could this be the new message? (Taken at last weekend’s GOP state convention in Green Bay.) Republicans are trying to kill America! (U.S. out of North America!) 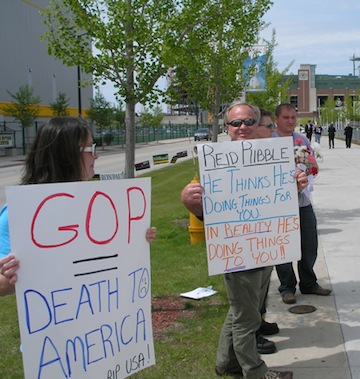 Deja vu all over again

• The liberal DailyKos/PPP poll for May 11-13 shows Walker up by 5% among likely voters.

• The automated poll We Ask America is something of an outlier, putting Walker up 9 percentage points.

• The Marquette Law School Poll out yesterday says +6 points, up from -1/+1 two weeks ago.

Golly, 5 points is the margin by which the governor defeated the Milwaukee mayor 19 months ago. Hmpf!

What’s more, the Marquette poll says 91% of Republicans said they are "absolutely certain" to vote June 5, while 83% of Dems and independents said they planned to vote. That’s what is called an enthusiasm gap.

I respect Greg Humphrey, a former legislative aide, as a reasonable Democrat. He writes this week in Caffeinated Politics: “As with everything there is a shelf-life, and that pertains to political anger as well as the milk in the refrigerator. I have felt for some time that the level of angst and outrage … has diminished to some extent across the state and will impact the final decision on June 5. I was not amused by the turnout for the Democratic primary.”

That Democratic turnout in the May 8 primary, btw, was about 230,000 votes fewer than the number of recall signatures and only about 24,000 more than Gov. Walker received, with no real opponent and no effort to turn out the vote.

So why are we having this recall, again?

The Democrats must pay!

“I think there’s a lot of discerning Democrats on the margin out there who realize this is a big waste of time and money,” Walker told Wisconsin native Greta Van Susteren on Fox News last night, according to Politico. (HT: Althouse): "Roll the tape, Lester."

Republicans did not call this special election. It was coordinated by the Democrat(ic) Party. It will cost us taxpayers at least $16 million, according to the Government Accountability Board (as reported by Fox 11 News).

We’re 19 days and counting from the June 5 general election. I am not in a forgiving mood. I am sending a taxpayers’ bill for $16 million c/o Mike Tate, Democrat(ic) Party of Wisconsin, 110 King St., Suite 203, Madison, WI 53703. I invite you to do the same. Copy this graphic and email it to MikeT@wisdems.org. 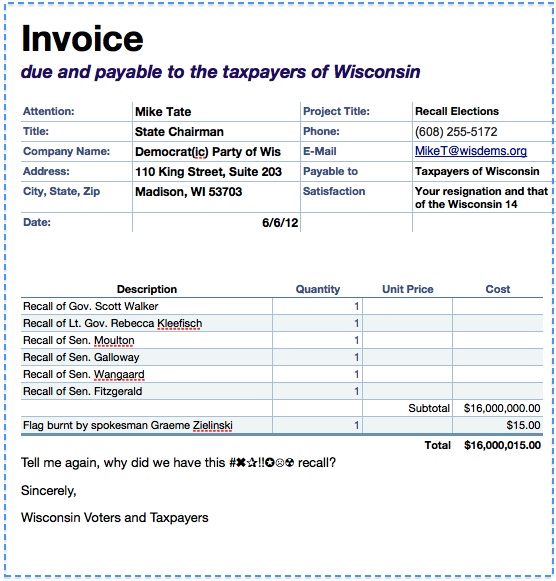 Today’s required reading, from The Washington Post: “What has Walker done to justify a recall?”

“If you are going to spend a ton of the taxpayers’ money and cut short an elected official’s term, he better have done something really, really bad. But in Walker’s case, his reforms have pretty much worked out as advertised.”

• This morning’s Wisconsin State Journal editorial commends the Oconomowoc school district for embracing changes that are “sure to keep and attract talent while boosting morale.” What it does not mention is that the school district was able to do so only because of Scott Walker’s Act 10 collective bargaining reforms.

• Why is John Nichols conducting a whispering campaign of innuendo alleging charges so outlandish and so unsupportable that he dare not put them in print? I can think of two reasons: desperation and lack of journalistic ethics.

• Once again: How would Tom Barrett have dealt with a $3.6 billion budget deficit? Raise taxes? Lay off employees? Cut programs? When will he tell Wisconsin voters?