The Democrats make a collective bargain with the late Joe McCarthy

Blaska’s Bring It! blog approved this message, as have the two younger Koch brothers, Raoul and Alec.

How desperate must a political party be to adopt the scattergun, see-what-sticks tactics of Tailgunner Joe McCarthy?

As desperate as “a marathon runner pulling up limp in the last mile,” Politico is writing today.

State’s evidence is the 349-word diatribe of retribution the Democrat(ic) Party spewed in the wake of Sunday’s Milwaukee Journal Sentinel endorsement of Scott Walker.

When is the last time a political party drew this much attention to an adverse newspaper editorial? Or lost its cool so dramatically?

"One need only read the Milwaukee Sentinel editorials AGAINST the Civil Rights Movement and FOR Joe McCarthy to remember how silly and reactionary a news organization can look in the hindsight of the ages.”

(Blaska: Or a certain political party supporting slavery, if you want to talk a little history.) 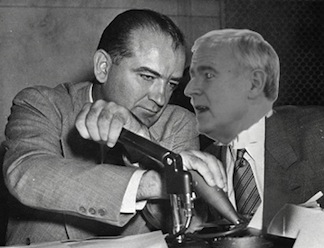 Back to the official response of the Democratic Party of Wisconsin:

"And so it will be with Scott Walker, who has been treated with the embarrassing kindnesses of the Journal Communications empire, which props up the Walker agenda with a daily and unrelenting stream of propaganda via right-wing extremists Charlie Sykes and Jeff Wagner.”

Well, when you’re that liberal, everyone else does look “extreme.”

Now for some more history. The old Sentinel (a great morning newspaper, btw) may have been on Tailgunner Joe’s side when it was part of the Hearst chain, but it was purchased by the Journal Co. in the 1960s. It is Journal Communications that owns the combined entity.

Joe McCarthy loathed the Milwaukee Journal and put it on his enemies list, according to Edwin Bayley’s Joe McCarthy and the Press (Page 127). Joe called for a boycott of the newspaper in 1950 (Page 135).

Here’s some irony for you: Dem Party operatives like Bill Christofferson now are the ones urging a boycott of the newspaper.

Collective bargaining and other issues proved to be non-starters so the party is alleging criminal activity.

A desperate Barrett now is asking for emails as if he were a prosecutor. Never mind that it was Walker himself who alerted authorities when he suspected wrongdoing by subordinates in Milwaukee County. (Meanwhile, the real John Doe investigator, in the employ of a Democrat(ic) district attorney, is a big campaign donor to Democrats, with a Recall sign in his own front yard, Media Trackers reports.)

The recall was always a bad idea. Wiser heads saw that right away.

“Top Democrats now say that when labor groups first raised the specter of a recall, the party's officials urged their allies in Wisconsin to reconsider,” the Wall Street Journal reports. “‘We told them it was a bad, bad, bad idea,’ one Democratic official said. … Party leaders also counseled against pouring money into a contested primary ahead of the recall election, the Democratic official said.”

It is not happenstance that President Obama did not scuff his penny loafers in a Wisconsin recall march.

The public sector labor unions and the state party, their offices and minds trapped in the Madison bubble, got stoned on cosmic dust left over from the ‘60s. Students were marching down State Street as in days of yore. Fourteen legislators went on the lam like Easy Riders, but with room service instead of campfires. Busloads of unionized teachers, under orders from WEAC headquarters, descended on Madison from Portage, Oshkosh, and other exotic locales. That must prove that this thing has grass roots! Media opportunists like Michael Moore and Jesse Jackson and the Mr. Ed Show dazzled the masses with star glitter.

Laying siege to the Capitol – not the dispiriting shellacking we took in the November 2010 elections – must be what democracy looks like. Bullhorns and drum circles must be what democracy sounds like. Disrupting a Special Olympics ceremony? Only actors hired by the Koch Brothers would suggest bad manners. And a guy named Alec.

Hey kids! Let’s have a recall! Let’s throw $5 million of our members’ dues at “The Kathleen” Falk for governor! She’s from Madison and they love her like a sister!

The endorsement of Walker by the Milwaukee Journal Sentinel, historically a liberal newspaper, is the equivalent of Walter Cronkite’s televised change of heart on the Vietnam War. LBJ later said he knew he had lost the American public right then and there.

The Democrats know it, too.

Hey kids! Hear Blaska talk about all this on the Kathleen Dunn program from 9 to 10 a.m. Wednesday on the Ideas Network of Wisconsin Public Radio.

More young adult lives lost in Wisconsin, even as death rates down for older adults

On jobs and economic growth, state lawmakers share interest in what works