The Democrats’ adult has left the room

Maybe they should put the Capitol furniture on coasters.

In the mad scramble for empty prestige and meaningless one-upmanship, Democrats in the State Senate seized the prime office space in the State Capitol after taking the majority 17-16 this summer. But the Senate is not scheduled to meet until early next year, by which time all but the most Left-pixillated observers expect Republicans will have reclaimed the majority in the November elections.

But Tim Cullen’s noisy departure from the Democrats’ caucus to become an independent is no one-day story. The veteran legislator’s escape to freedom is more than just inside baseball, interesting only to political junkies. It could have major implications.

Firstly, Cullen’s move was not due to petulance over getting stiffed on his preferred committee assignments by Democratic Senate leader Mark Miller. That was simply the proverbial last straw.

Cullen, 68 years of age, has been around politics long enough to know how to play the long game. He is not a snit freak. In a previous stint in the Legislature, he served as the Senate’s majority leader himself. He was Tommy Thompson’s first secretary of Health and Social Services – back when that department had welfare policy AND corrections, in addition to health. That’s why Cullen wanted health, or education, and not a committee posting in tourism. Instead, Miller gave him squat.

When Sen. Cullen left the Dems’ caucus on Tuesday, he slammed the door hard behind him. For the hard of hearing, he issued a statement. For the terminally clueless, he held a press conference.

Given that the Senate is not in session, all this could be moot except that it puts a major crimp in the Democrats’ narrative that the Republicans are the party of extremists – a tale they peddled throughout their sojourn to Illinois and the rest of the turmoil of the last two years. In fact, Cullen parlayed with Walker’s chief of staff during the Illinois exile. He won major concessions in the Act 10 collective bargaining bill until Sen. Miller scotched the effort with an absurd demand that the governor himself travel to Illinois to talk Wisconsin policy. That is when Walker’s people realized they were dealing with a nut job as head of the caucus.

As Clay Barbour reports in today’s Wisconsin State Journal, Cullen attributed Miller’s slighting him to “his independent nature and track record of working with Republicans on certain issues.”

The great walkout proves, blogs Kevin Binversie at Lakeshore Laments, “just how ideologically minded the new Democratic Senate majority is. For all the talk about ‘reaching across the aisle’ after getting the majority last week, Miller shows in one swift action that he will punish those who do not bow to the party line he is keeping.”

For better or worse, Cullen is to Democrats what Dale Schultz is to Republicans, the bridge-maker who annoys the party faithful, but is needed nonetheless. Miller just threw his bridge-maker out. For all the screaming and name-calling at Schultz, no one in the GOP caucus has ever considered doing that.

The Blaska Policy Research Center and Herpetarium believes that Scott Fitzgerald and Scott Walker are talking to Cullen right now. They are asking: How does that mining bill look to you? A little better? In which case, Rich Zipperer will put off his planned August departure from the Senate (to join the governor’s administration) for a special session of the Legislature, one that would really pass a jobs bill.

Yes, let’s put a real jobs bill up for a vote a month or two before the Big Election! How many of the 10 Dem Senate seats in play this cycle (versus seven for the Republicans; Cullen is not up in 2012) will be pressed to make good on their campaign message of economic growth and sweet reasonableness?

This would require Republican Dale Schultz to also switch his vote – he was the lone Republican to vote against mining earlier this year. But he and Cullen are personally close. They traveled to each other’s districts in a show of cooperation between the parties.

Furthermore, how much more tempted is Schultz now to join his friend as an announced independent? Perhaps with Democrat Bob Jauch? If so, they could be in a controlling position, the critical middle, unless Republicans can improve their margin to 18-15 in the November elections, which they expect to do.

At the very least, Cullen’s departure spells the end of Mark Miller as Democratic caucus leader. Perhaps to be replaced by one Tim Cullen?

You can read the email announcing his decision here. 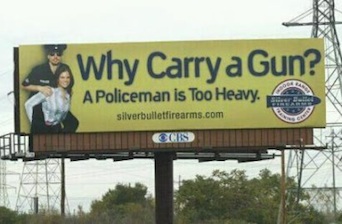 No firearms in this theater, please

Do you suppose that movie theater in Aurora, Colo., had signs prohibiting weapons? If so, they could levy a fine against alleged perpetrator James Holmes (not the Tea Party James Holmes but the Batman and Joker fanboy) in addition to 12 counts of murder in the first degree.

Lance Burri at the TrogloPundit: “If only that Colorado theater had allowed concealed weapons.”

… well, maybe. Colorado does have a concealed carry law (they’re reciprocal with Wisconsin). I read someplace, however, that the theater – a privately owned business – doesn’t allow weapons inside. If so, well …

… I guess it’s a little too easy to blame the theater for not telling people that. Surely the shooter would have abandoned his plans, had he only known.

There’s a lot of internet chatter going on about whether more gun “control” laws are the answer to mass murders like the one in Aurora, Colorado last week because, you see, the shooter (who ignored the theater’s perfectly legal banning of weapons on their own property) would have totally adhered to another law.

• A self-defeating strategy if ever there was one. NY Mayor Super Slurpee: Police should go on strike until people give up guns. – Red State

• Making the rounds on the ether: “If more sane people were armed, the crazy people would get off fewer shots.”