Thanks for the recall: we won with a lot of help from our friends

Who most helped us sink the Recall Walker movement? Who provided the heartiest belly laughs during the tense Siege of the Capitol and subsequent Wisconsin Recall Season? Now that the fog of battle has cleared, let’s round up the usual suspects.

Our leftward acquaintances can blame the Koch Brothers and “Faux News” all they want. But these names deserve credit for making Scott Walker the national rock star he most certainly is today.

And the nominees are:

• Segway Jeremy. Poster boy for the arrested development, cause adolescent who scoots around the Capitol on his mobility device to better disrupt the public’s business and feel important.

• Bike Lock Girl. Locked herself to the Senate gallery railing. Harassed CNN News because they were out of state, as if that was relevant to anything.

• Comrade John Nichols. Socialist provocateur and John Edwards fanboy who traded whatever credibility he had left for a bullhorn to cheerlead the besiegers of the Capitol. His message: Republicans crafty, voters stupid.

• Marty Beil/Mary Bell. Or is it Mary Beil and Marty Bell? I’m so confused. (Ever see them in the same room together?) The Big Labor bosses anointed “The Kathleen” Falk as their recall nominee because she drank their Kool-Aid. No actual, you know, input from their members. They travel to Milwaukee to diss Mayor Barrett, the eventual nominee. Threw away $5 million of their members’ money to get 34% of the vote in the primary. Drove their brand off the cliff.

• Michael Moore/Jesse Jackson. The first guy denies Wisconsin ever had a budget deficit. Ever hear of the Pew Center for the States? In Jim Doyle’s last years, it ranked Wisconsin as one of the 10 most fiscally mismanaged states – on a par with California. The second is a race hustler who likened Wisconsin’s governor to George Wallace on the Mr. Ed Show. The two demagogues can sell stupid someplace else. MSNBC is always in the market.

• Graeme Zielinski. This is the spokesperson for a major, putatively serious, organization? Well, we ARE talking the Democratic Party of Wisconsin. This guy is looney tunes! Daffy Duck with Tourette syndrome.

This proud flag-burner is the recipient of PolitiFact’s “Pants on Fire” lifetime achievement award for his outrageous lies.

This is a guy who tweeted: “It's Medicare's 45th Birthday. Celebrate by punching a Republican.”

(See how he corrupts the late Rep. Clement Zablocki’s memory by commandeering his image for his avatar!)

Kept barking “Get out of Wisconsin” at a conservative debating partner on Wisconsin Public Television. Here and Now host Frederica Freyburg had to ask Zielinski to cease and desist.

At The Capital Times, Jack Craver explicates on all of this, in “Combative Dem spokesman … pushes the envelope.”

“Zielinski upped the ante: ‘Oh, give it a rest you gasbag. You're a war profiteer, but I give you credit for getting paid.’”

“I was hoping that someone would pay this guy’s bar tab and tell him to shove off. Instead the political lightweight continues making scenes, such as that which took place at last weekend’s party convention.”

Wauwautosa Now, a community website, observed, “The Republicans I know all think he comes across as completely deranged …. Most Democrats I know think he is an embarrassment, so I’m wondering how the guy keeps his job? Also from his Twitter he seems pretty proud of the fact that he is a frequent guest on Sly’s radio show in Madison.”

Which brings us to … 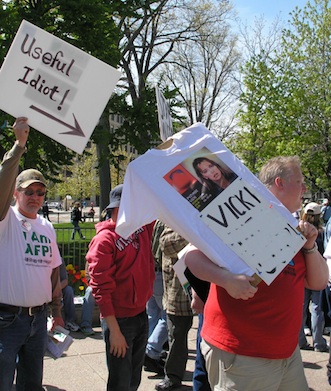 The creepy Slymer has an unhealthy obsession with his more successful rival, the Divine Miss Vicki of WIBA-Madison, WISN-Milwaukee, and WMEQ-Eau Claire radio.

Last Thursday, he called Vicki McKenna a “filthy lying whore.” On Friday, “a piece of white trash” and “chlamydia.” On Monday, a “filthy, pus-dripping wretch.”

He called Tonette Walker “the most ridiculous first lady we ever had.”

He followed up by saying Scott Walker needed “aphrodisiacs to help him cope with Tonette.”

On Monday, The Radio Slymer threw former co-worker Jack Craver under the bus, saying that Zielinski would always be welcome to share his microphone, as is Comrade Nichols. Three peas in an iPod from Hell. This is progressive radio?

It will be interesting to see whether U.S. Senate candidate Tammy Baldwin and U.S. Rep. candidate Helen Kelda Roy demean their campaigns by sharing The Radio Slymer’s non-union microphone.

The man is air pollution. He should hire out as a stool-sample donor. I’m done with sampling his podcasts; I’m taking a shower.

When will they ever learn?

This MacIver video shows three stalwarts of the protest. The first is the guy who I chased down at the last Tea Party event and got on the ground (w/o touching him and I will so testify) after he blew his horn at me. (Notice he has the blue horn of deafness in his hand in this video.) The second is Pink Dress Guy. He harasses a (probably) union worker who is driving the CNN bus. The third patient furloughed by Michael Dukakis is known as Hippie Bongstocking.

The MacIver Institute reports that Big Labor protests bipartisan picnic. Gov. Walker reaches out to the very people who fled Wisconsin to impose minority rule, the very partisans who tried to recall him. He proposes a get-together with beer and brats at the Executive Residence. No photo ops. All off the record.

Sure enough, Gov. Walker’s conciliatory gesture is greeted with pickets and chants. Don’t you just wish Sen. Fred Risser had admonished the crybabies with a moment of senior statesmanship. “Hey, friends. We fought the good fight and we proved one thing: this perpetual protest merde ain’t working.”

But then, the venerable legislator would not want to contradict the modern Democrat(ic) party: The Radio Slymer, Spokesmouth Zielinski, Comrade John, and Marty/Mary Beil/Bell.

Unfair? Will Sen. Risser, Erpenbach, Miller call them out? Will Reps. Pocan or Barca take them to task? A former Madison mayor has made a start and I give him credit.

Finally, I wish I had written this. I don’t know who did but it expresses my sentiments exactly. A Thank You Letter to the Left.

Madison growler bar set to close in February after 6 years