Tale of two challenges: The U.S. election and COVID-19

From Main Street to Wall Street, presidential elections always ratchet up the anxiety. Layer on top of that a pandemic that essentially shut down the global economy earlier this year and is showing signs of a resurgence, along with a landmark Affordable Care Act case on the docket of a newly constituted Supreme Court, and it’s a perfect recipe for a stressful and potentially volatile winter.

SLOTNICK: Some political scenarios more likely than others, but plan for all of them

According to Sun Life’s Slotnick, a Democratic sweep of the White House, Senate, and House appears to be the most likely result of Tuesday’s balloting even though the outcome is less certain — and likely will take longer to ascertain — than many are expecting. President Trump has been on defense in a half dozen of states he carried in 2016 and with those headwinds and 23 Senate seats to defend, Republicans will be hard pressed to hold seats in Maine, Arizona, Colorado, and possibly even Iowa and North Carolina.

Still, underscoring the uncertainty and imperative to consider multiple scenarios, there is one plausible outcome that few pundits are talking about: The possibility the Democrats capture a slim Senate majority (and hold the House) while Trump finds a way to hang on to the White House.

Putting the DUCK! in lame duck

Regardless of who will be sitting in the Oval Office on Jan. 20, two pressing issues will be front and center in the interim: economic stimulus and Texas v. California, a case with the potential to gut the Affordable Care Act that comes before the Supreme Court just one week after election day.

A second major economic stimulus package is looking less and less likely in the final months of the current Congress. Media attention has focused on negotiations between House leadership and the administration on the details of an approximately $2 trillion package. In the background, however, Senate Majority Leader Mitch McConnell has signaled little appetite for a bill anywhere near that scale. Complicating matters further, lawmakers must come to agreement by Dec. 11 on a measure to fund the government and avoid a shutdown. And nobody knows how engaged and motivated Trump will be to push GOP senators to step up on stimulus if he is on the way out.

Post-election Washington will also be distracted by the major health care case coming before the Supreme Court, with oral arguments Nov. 10 and a ruling expected in the first quarter. In Texas v. California, a dozen and a half states are challenging the constitutionality of Obamacare’s individual mandate and arguing that without the mandate, the entire law should be tossed out.

The justices could rule that the mandate is constitutional, annul it but let the rest of the ACA stand, or remand the case back to the lower courts, any of which would be the least disruptive outcomes for businesses.

On the other hand, if the court finds the mandate unconstitutional, there are several scenarios employers should be ready for:

After the inauguration, back to mostly gridlock?

Gridlock can be expected to continue to be the defining feature of American political governance for the foreseeable future.

Minimally, Democrats should maintain the House and thus have a seat at the table to slow legislative change. In the more likely event of a Democratic sweep, it is still unlikely they will be able to enact the sweeping legislative agenda many in the business community fear because the Senate is likely to be narrowly divided and several more moderate Democrats — along with Maine’s Sen. Angus King, who caucuses with them — have gone on the record opposing changing the filibuster rule.

With the filibuster still in place, there may be a possibility of progressive tax reform under budget reconciliation rules that only require a majority Senate vote. However, more sweeping changes, including a second major overhaul of health care, are less likely.

JFG’s Brian Andrew acknowledged that the election is on everyone’s mind, but stressed the importance for nervous investors to take a long view when it comes to political changes and the capacity for the economy and financial markets to adjust.

To be sure, investors should be prepared for significant near-term asset price volatility as the market processes the results. Volatility will be especially pronounced if the election outcome isn’t immediately clear or is disputed, as was the case in 2000, when stocks fell sharply because the results were tied up in court. But investors would do well to keep their eye on their long-term plans and goals.

Elections: A nothing burger for financial markets?

The imperative to ignore volatility and maintain a disciplined, long-term view may extend into 2021. Even when the dust settles from the election, the chart below shows that markets historically underperform in the first half of presidential terms before new policy initiatives take root. But the chart also shows something even more interesting and important: Over entire four-year presidential terms, the parties that control Congress and the White House appear to have little impact on market performance. As it turns out, a diversified basket of stocks tends to return a relatively steady 9%-plus no matter who is in charge. 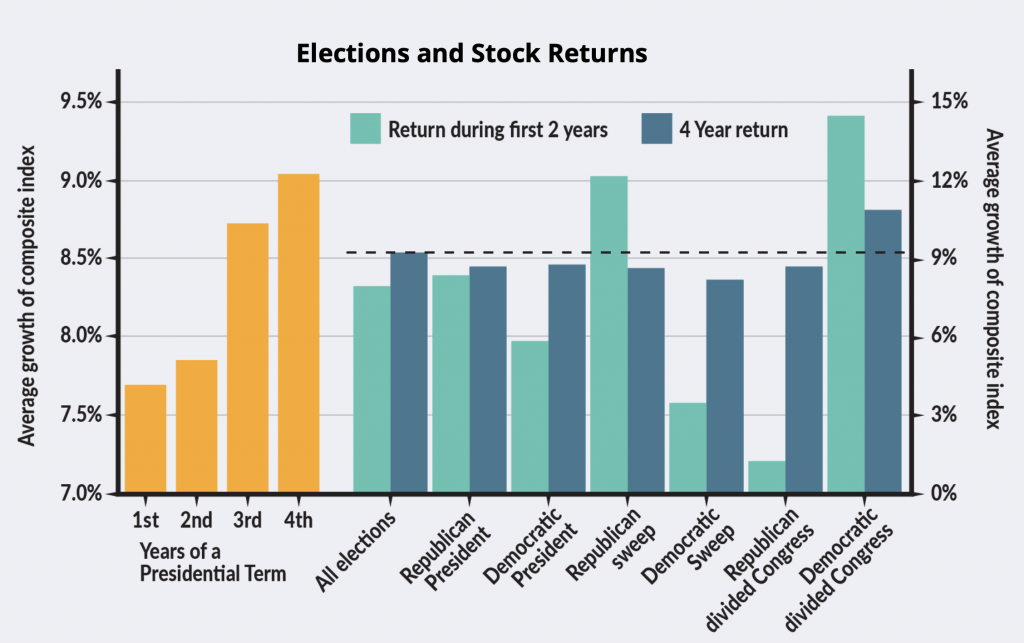 Beyond the historical political patterns, several specific cyclical factors suggest investors should set aside any election-related angst and prepare for a return to economic growth:

On top of these cyclical factors, several secular trends — including huge housing gains, the apparent death of inflation, and a new kind of technology boom — can be expected to provide tailwinds for the next big economic expansion and bull market.

Housing. New home sales are booming and not just because of low mortgage rates (though they certainly help!). Millennial family formation is proving a key driver of demand and the trend is just getting underway; when 70 million 23- to 39-year-olds dramatically shift their lifestyle and buying habits, it can have a large impact for a long time. And a demographics-driven boom is less likely to turn into a speculative bubble that ends in tears.

Inflation. Despite the unprecedented fiscal and monetary stimulus, an inflation rate that would kneecap bondholders or prompt the Federal Reserve to tighten has not materialized. That’s one reason to maintain a fixed-income allocation. To be sure, yields are not great across the curve (so there’s no compelling reason to invest in longer maturities), but bonds have decoupled from stocks in recent years and thus provide value as a portfolio diversifier.

Stocks. Clients have been asking nervous questions about equities — why have stocks rallied so sharply despite a lackluster, pandemic-suffering economy, and do the large-cap growth names in the technology sector that are responsible for most of the market gains, such as Amazon, Apple, Facebook, Google, and Microsoft (FAAMGs), represent a speculative technology bubble?

The first question is easy: Stocks are nearly always a leading indicator and the market is clearly looking past the pandemic to a period of greater growth. As for the tech question, it’s worth considering whether the FAAMGs are really tech stocks subject to competitive pressures and obsolescence. Because their products have become so foundational to our daily lives, they might more appropriately be considered “platforms for future economic growth” — integral participants in and beneficiaries of the recovery. That doesn’t mean investors shouldn’t consider taking the rally in these names as an opportunity to rebalance — growth has been in the spotlight but the beaten down value sector can be expected to have its day in the sun and election-related volatility can represent a terrific opportunity to rebalance.

A short-term opportunity to take the long view

Politics and pandemics are bound to cause volatility and anxiety. But for investors who take the long view, they can also provide an opportunity to recalibrate, rebalance, and refresh their financial plans. In the words of that consummate portfolio strategist Winston Churchill, “Never let a good crisis go to waste.”

How ‘please’ and ‘thank you’ drive your business growth and value

Why venture capital is vital to economy: A national view brought home