Editor’s note: This is the second in a two-part special report on how one of Madison’s venerable streets has fared during the COVID-19 pandemic. Part 1 ran on Feb. 23. A related column from the author can be read here.

On paper, the eight blocks of State Street were loaded for future success from the day Wisconsin was admitted to the Union in 1848. The Capitol and later the growing state bureaucracy sat at the top of State Street. The UW campus and its growing community of scholars anchored the bottom. “Densification,” as Madison historian David Mollenhoff puts it, was the growth trigger.

Both the city and the university grew rapidly between 1900 and 1920. Madison’s population doubled to 38,000. Campus enrollment more than tripled to 7,000. “In 1900, State Street was almost entirely residential,” Mollenhoff notes. “By 1914, the first six blocks were almost entirely commercial.”

The siting of two department stores, Hill’s and Kessenich’s, cemented the premier position of State Street for shopping in the 1930s, says Stuart Levitan, another Madison chronicler and author of Madison In The Sixties. Montgomery Ward and Sears, Roebuck and Co. became fixtures too, joined by Manchester’s and J.C. Penney on the Capitol Square. 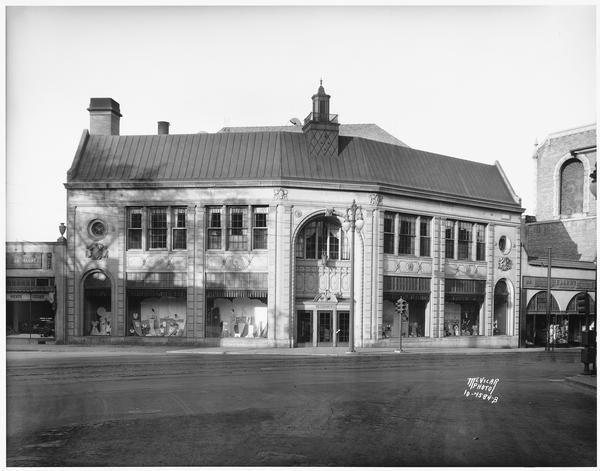 Trouble arrived in the ’60s after suburbanization hit critical mass, and the big retailers followed the split-level rooftops to the city’s edge. Westgate Mall opened in 1960; Hilldale in 1962. The east side welcomed Sherman Plaza and Madison East Shopping Center. The opening of the giant West Towne and East Towne malls in the early ’70s — together they had almost 2 million square feet of retail space — became capstone events for a new retail order that held sway for the next 40 years.

What would happen to State Street and the Capitol Square? Storefronts were emptying. Assessments were dropping. A long, hard slog began to turn things around, the details of which are suitable for a UW graduate-level urban affairs class. The short version involves the shared commitment of energized neighborhood activists, business leaders, and City Hall, particularly Mayor Paul Soglin, to rebuild the downtown as a place to live and work. The failed notion of competing with the malls was cashiered once and for all.

A series of major public investments paved the way. Each endured a fiery political baptism. The shuttered Capitol Theater and old Montgomery Ward building were deftly converted into the Madison Civic Center in 1980. (The Overture Center for the Arts, funded by philanthropists W. Jerome Frautschi and Pleasant Rowland, replaced it.) The Capitol Concourse and State Street Mall projects, thanks to federal funding, updated the downtown shopping district and made it more pedestrian- and bus-friendly. The Frank Lloyd Wright-inspired Monona Terrace Community and Convention Center emerged on the shores of Lake Monona after a legendary 60-year crusade.

It took decades, but these investments paid off. Downtown Madison drew new residents. It drew tourists and conventioneers. It drew private investment. It drew tech. It drew entertainment and new restaurants. It drew the Epic kids who made apartment developers rich.

“It ended up creating the most expensive real estate in Wisconsin,” says Soglin.

The downtown tax base reached $3.08 billion in 2020, a hike of $1.2 billion from 2011, according to a recent downtown report. One percent of the  Madison landmass was producing 10.5% of the city tax base. This despite the fact that 39% of the buildable land downtown was tax exempt. Housing boomed as 5,311 residential units were either built or approved for construction in the 2010–19 period. Property tax collections hit $67.2 million in 2020.

Now the bad times have returned on the wings of a virus. 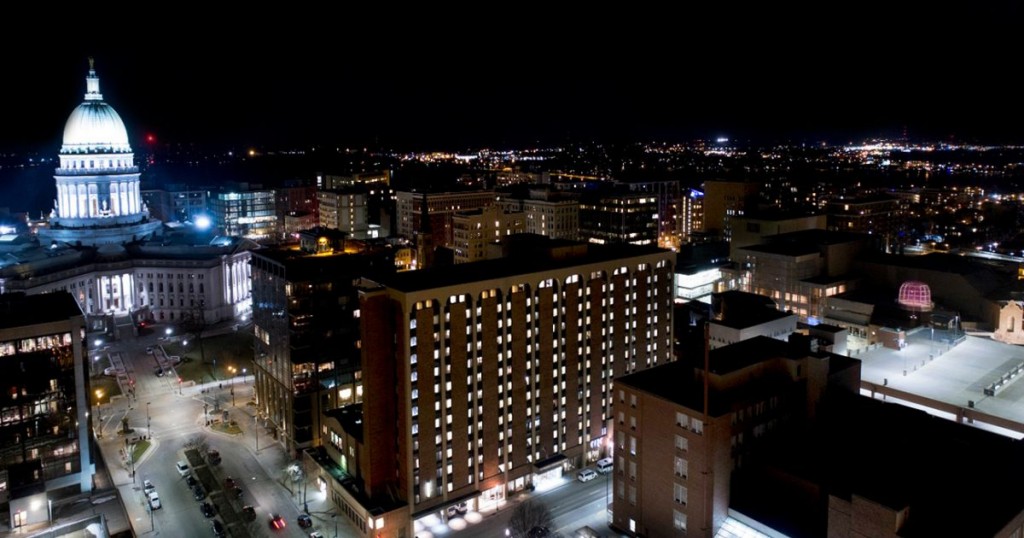 The Madison Concourse Hotel and Governor’s Club saw business plunge 70% to 80% in 2020.

Madison’s hotels are reeling worst of all from the shutdown of the convention business and the crippling of tourism. The Madison Concourse Hotel and Governor’s Club, for example, saw business plunge 70% to 80% in 2020, prompting major layoffs at the city’s largest hotel, according to general manager Steve Zanoni. Of note: In 2020, the Concourse was assessed at $33.9 million, which produced a total property tax bill of $777,528. Zanoni is prepared to appeal the 2021 assessment.

He will not be alone. The surge in unrented storefronts, and with many remaining tenants in arrears on their rent, does not bode well. Fact is, the downtown’s diminished economic vitality will probably weaken the city’s financial ability to help those poorer neighborhoods that the City Council wants served.

Retired visitors bureau boss Deb Archer says it will take three or four years for tourism to hit its 2019 level.

Soglin suggests that downtown properties will decline 15% to 25% in value. A tax attorney I interviewed predicts an even bigger drop. The attorney, who doesn’t like to see his name in the news, expects a rush this spring of downtown property owners opening their red-drenched bottom lines to the city assessor and making a “slam dunk” case for a lower assessment.

If this happens, these lowered assessments will produce less tax revenue, which will shift the tax levy burden to homeowners. By all accounts, Madison’s residential real estate market is holding up just fine. Jim Imhoff, chair of First Weber, the state’s largest real estate firm, says Madison home sellers are profiting from bidding wars. If there’s a problem in the Madison market, Imhoff says, it’s the lack of inventory to meet the demand.

The bad news for City Hall grows only worse when you factor in the precipitous decline in hotel room tax revenue in 2020. No conventions mean lost room taxes. The city, which had budgeted $19.6 million in room tax revenue in 2020, might only collect $7.3 million, city finance director David Schmiedicke estimated in December. The 2021 budget splits the difference, anticipating a modest $13.4 million in revenue.

Soglin, whose relationship with the council grew evermore contentious as the years wore on, suggests its newer members will learn a harsh lesson in municipal finance when they put together the 2022 budget: Alders will likely find themselves between a rock and a hard place — either cutting neighborhood programs or saddling homeowners with a big tax increase.

The lesson, Soglin says, is that the private investment downtown coupled with room tax revenue “provides Madison the [financial] ability to fund its rather robust community services program.” That’s the dynamic that can lift up poorer neighborhoods. That’s why the City Council hostility toward State Street, as detailed in part one of this series, seems so shortsighted.

The mega projects don’t address the all-consuming crisis at hand for State Street businesses: the loss of foot traffic.

Doug Poland, the past chair of the advocacy group Downtown Madison Inc., has the calm and unruffled demeanor that you might want in a captain when the crew are screaming about the giant iceberg.

“The situation downtown is not as bad as people who deal in gloom and doom say,” he says. “I think they want to be part of this cosmopolitan, hip city, but when things don’t go the way they envision, they panic.”

By summer, Poland expects COVID-19 and the political unrest to be in the rearview mirror. “We know it’s going to pass,” he says. “The question is how strong and viable State Street businesses are to wait this out? The winter is going to be tough — no doubt about it.”

Poland, like Soglin, is disappointed the council didn’t grasp the importance of supporting State Street. His broader point is that cities always have their ups and downs. That’s why DMI was founded decades ago. The downtown mission had to be reconceived in an era of suburban malls and big-box retailing.

“Cycles are the nature of life,” he says. “You have order, disorder, and reorder.” 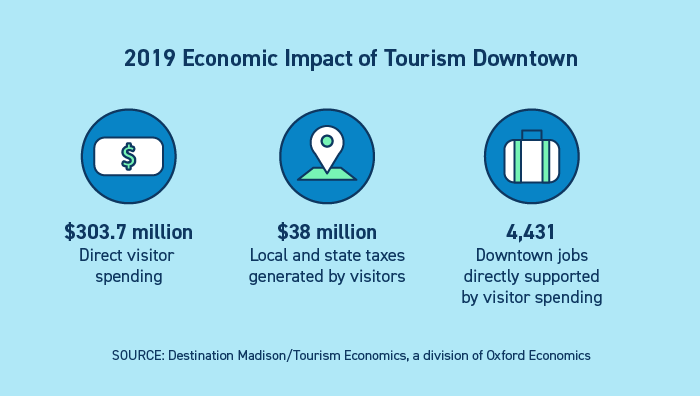 Poland agrees: “You can do both economic development and equity.”

He says that Madison’s permanent assets remain in place: a world-class university and a world-class setting on an isthmus flanked by two beautiful lakes. Moody Analytics, in a study reported by Forbes, declared Madison to be among the top 10 U.S. cities poised to recover from the pandemic. Poland also points out how investors and developers seem undeterred by the economic disorder of the moment.

Notably, Urban Land Interests, the city’s premier development group, is proceeding with the $125 million American Exchange office project on South Pinckney Street on the Capitol Square. More recently a Chicago developer announced a $100 million proposal to build a huge mixed-use (but heavy on rental housing) project on the 300 block of State Street.

The surge in unrented storefronts and tenants in arrears makes for “a slam dunk case” for landlords to appeal their assessments, says a tax lawyer.

Such investor interest demonstrates the optimism that still buttresses the downtown’s future, but these developments — years away from opening their doors — don’t address the all-consuming crisis at hand for State Street’s businesses. They desperately need the heavy foot traffic of shoppers and diners now. Convention-goers and tourists, once a lucrative State Street market, have disappeared. 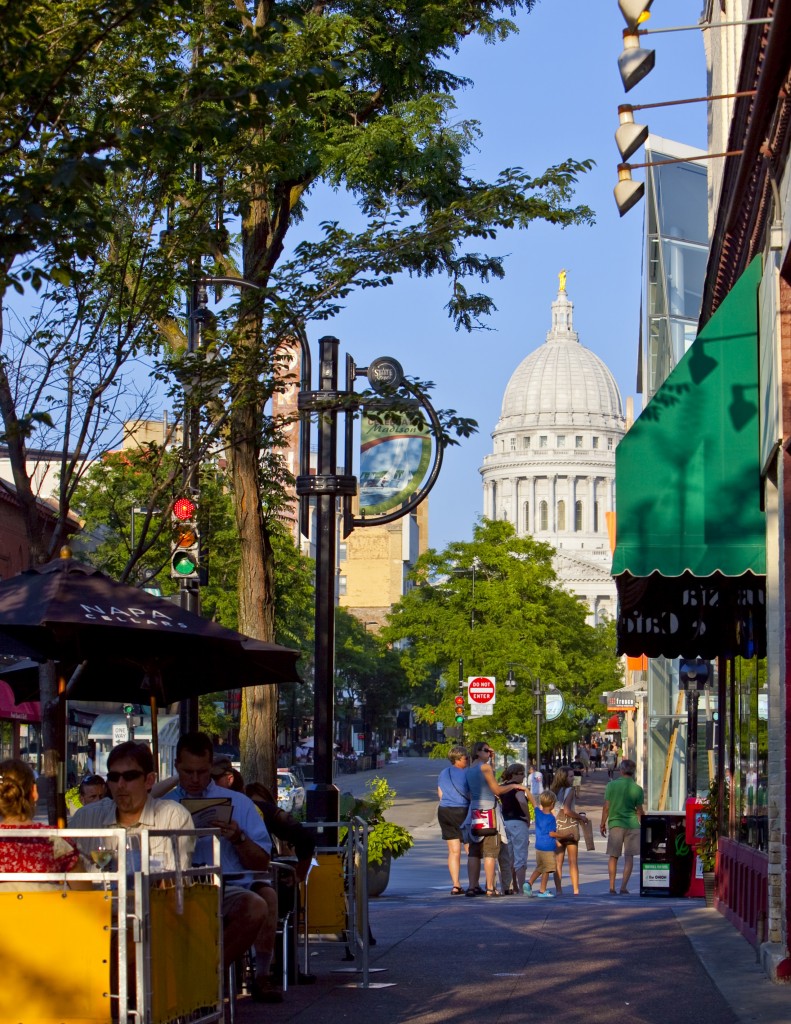 A summer day on State Street before the pandemic. Photo by Brent Nicastro

“Catastrophic without question” is how Deb Archer, the retired visitors bureau boss, characterizes the pandemic’s toll on her industry. In 2019, direct visitor spending in downtown Madison hit $303.7 million, and hotels scored their high-water mark in bookings. After 2020, experts were telling her it would be 2023 before business bounced back to that level. But Archer is doubtful. She thinks 2024 or 2025 would be more realistic.

Madison historian David Mollenhoff, whose involvement in downtown issues dates to 1971, makes the same worrisome point about bolstering State Street and the Square. “It’s extremely difficult. It’s like steering a tanker,” he says. “You can turn the wheel and nothing happens. It could take decades to turn this place around.”

Think about that. And think about what Colin Murray, executive director of the advocacy group Dane Buy Local, warned about in part one: That Madison will be lucky if the pandemic death toll for local businesses doesn’t reach 30%. He cautions it could hit as high as 60% kayoed by COVID-19.

Says Sue Springman of The Mullins Group, “We’re hoping people can hang in there.” Then she adds, “I think it’s going to be a lot more challenging than it was in the ’70s.”