Sarah Manski quits while she’s ahead

Sing it with Groucho: “Hello, I must be going.”

The withdrawal of Sarah Manski less than 48 hours after she won the primary for one of the Madison School Board seats is so cheap and tawdry it defies explanation.

There was no possibility that her husband, Ben Manski, might leave the state, having applied to an out-of-state graduate school? (Her withdrawal statement.) Just Wednesday, the day after the election, she was hitting us up for campaign money (thereby proving that money is, indeed, speech).

Ananda Mirilli, the loser in the three-way race, must feel totally hosed. Her name will not be on the ballot; Manski’s will. I am reaching out to Ms. Mirilli to run as a write-in candidate, particularly since Manski has polluted the candidacy of T.J. Mertz, the second-place finisher, by endorsing him. Just listen to her Marxist patois:

TJ Mertz … can be counted on to push back against the corporate takeover of our schools.

“The corporate takeover of our schools”? Tinfoil hats to the Left! Sarah and Ben are supernumeraries with the proto-Marxist, Green Party-line Liberty Tree Foundation, of which John Nichols (their constant booster) is president. (A fact he never discloses, as this encomium shows.)

How stupid must Hizzoner Mayor Paul Soglin feel for this endorsement:

Sarah Manski is committed to building a strong partnership with the city and our schools. That’s why I’m committed to seeing Sarah Manski, who is smart, successful and dedicated, elected to the school board.

Some dedication! Some commitment! (H/T the Venerable Meade.) Whatever happened to candidates for local office who have a real and demonstrated stake in the community? It is clear that Sarah Manski and all too many local officials (insert name here ____) use local elective office as a bullhorn for the political ideology they learned from their social studies professors. 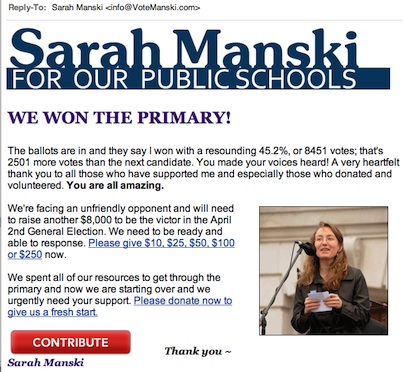 Who are these people?

I’m not so much worried about the corporate takeover of our schools (just think what Apple or Google could do with the Madison Metropolitan School District!) as I am about the incestuous closed circle of insiders who have been running the show for some 30 years now. Really, folks, it’s time to quit blaming whomever happens to be governor at the time and start taking ownership.

It is a sorry state of affairs when the welfare of the cosseted teachers union takes precedence over Madison’s well-documented minority achievement gap.

Sarah Manski’s “dedication and commitment” is no less apparent than that of Dean Loumos or Greg Packnett. School board veteran Ed Hughes, no Republican himself, says (via his very own blog) he’s never seen Loumos or Packnett or Manski at a school board meeting or function.

I don’t know any of them. During my five years on the School Board … I don’t recall seeing any of them at any School Board meeting … They have not been among the scores of community members who have spoken to us on nearly every conceivable topic during public appearances at our Board meetings.

Oh wait, Loumos sent an email once. “… I see that Dean Loumos sent us an e-mail last August urging us to reopen our union contracts and increase pay for school staff.”

By contrast, Hughes says he has “known and respected Wayne Strong [a city policeman and 17-year south side neighborhood volunteer (his bio here)] since we served together four years ago on the School District’s Strategic Planning Committee.” Strong is running against Loumos.

But Packnett and Loumos have been anointed by the Dane County Democratic Party/teachers union poobahs. For his day job, Dem party chairman Mike Basford works for Loumos. Isn’t that convenient?!

Packnett is best described as a professional Democrat. He serves on the local party’s board of directors and works for Democrat(ic) legislators under the dome. Packnett has been commissioned to take on School Board President James Howard, who sinned most grievously against the power structure by voting (as one of only two) for the Urban League’s proposed Madison Prep charter school.

Says Hughes: “James Howard … doesn’t speak as often as some of us, but when he talks about the achievement gap, the culture of our schools or the need for a more diverse work force, we all sit up and listen.” (Mr. Howard’s website)

• Journalistic malfeasance. “NY Cardinal Timothy Dolan deposed in sexual abuse cases.” Not until paragraph six – after polluting the waters with the name of probable abuser-shielder Roger Mahoney – does the Associated Press article get around to noting that Dolan “publicized the names of priests who had abused children …”