She blew through Monday’s campaign finance reporting deadline as blithely as she ran – and then quit – her race for Madison School Board. (“Paging Sarah Manski: You can’t leave for California just yet.”) But Sarah Manski has finally made an honest woman of her treasurer and protector of the union-dominated old guard, Nan Brien.

(The former school board member, nemesis of public schools chartered to address the racial achievement gap, told WKOW TV-27 that her role as treasurer was only as a figurehead. Like Sgt. Schultz, so many in Madison are saying about the Manski campaign: “I knew nothing!”)

The Manski fundraising report filed Friday – four days late – reveals quite the haul in just a few weeks for a local race: $7,733 since Feb. 5 for a race that she ended two days after the Feb. 19 primary election. That makes a total of $11,136 since entering the race in December. That’s a lot of Green! As in very Green green.

Now, if Sarah had been a conservative instead of a professional Walker stalker (see: Wisconsin Wave), The Capital Times would have staged one of its pretend ethics meltdowns about the evils of out-of-state money. An example of their situational ethics is “Pat Roggensack’s out-of-state cash”:

Wisconsin Supreme Court Justice Pat Roggensack makes little secret of her ideological and partisan alliances. And most of [her] money is coming from outside Wisconsin. 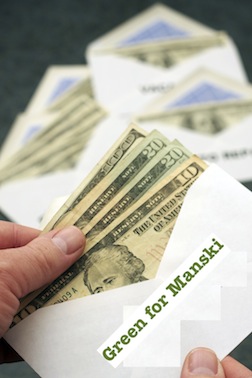 That is only a partial list of postmarks for “Manski for Wisconsin,” as her Madison School Board campaign was grandiosely named. Yes, when it comes to “outside cash,” John Nichols’ protégés get a pass. Manski collected 107 contributions in the latest reporting period, of which only 32 bore a Madison address, including: MTI boss John Matthews, $50; Mayor Soglin aide Sarah Miley’s husband, $100; and of course, Marj “Somebody Good” Passman, $50.

Otherwise, two-thirds of the contributions come from outside the school district; most of those, from outside the state. Kermit the Frog should have sang “It’s Rich to Be Green.” The national Green Party mailing list got quite the workout.

Greens are no strangers to the tinfoil hat conspiracies. Just listen to this spittle-stained rant from its national party platform: There is, they imagine …

… a vast, well-endowed and lucrative sector which seeks to dismantle, privatize, or militarize public education and destroy teachers unions. Regimes of high-stakes standardized testing and the wholesale diversion of resources away from public schools are provoking crises for which the bipartisan corporate consensus recommends school closings, dissolution of entire school districts and replacement by unaccountable, profit-based charter schools.

Take a breath, Greens. As for destroying teachers unions, give some credit to John Matthews, the Viagra-huffing Milwaukee Teachers Association, and the New York public school rubber rooms. Reminds one of the under-the-radar sucker-punching Ben administered to primary opponent Ananda Mirilli:

No, Ananda Mirilli supported the Madison Urban League’s proposed Madison Preparatory Academy – a public school, chartered to address the minority achievement gap. But, this is Blaska speaking, what could, say, Apple Computer do with, say, Toki Middle School?

These donors are not interested in Madison’s racial achievement gap. They are interested in using their money to prop up the militant teachers union and its stranglehold on public education. Sarah Manski was more than willing to take their money. That should tell voters a great deal about the Green Party – and their enablers.

It’s easy being a progressive when you have an elastic ethics standard, is it not?

Madison entrepreneur takes to TV to save the world

Fitchburg IMAX to reopen, back under AMC name