A friendly bit of advice for Pink Dress Guy, Segway Jeremy, Anarchy Man, and the Socialist Provocateur: Try to get out of Madison and visit the rest of Wisconsin sometime. You know, the places where they make and grow things. Lesson: Your grievances are petty and laughable.

I drove up to Green Bay for the GOP state convention Friday taking U.S. 151, State Highway 26, and U.S. 41 through the heart of the industrious Fox Valley. On the way back Sunday on a beautiful Mother’s Day, the lovely Lisa and I put the top down on our red sports car and took the leisurely back roads through farms and small town Wisconsin – places like Oneida, Poy Sippi, Black Creek, New London, Berlin, Green Lake, and Columbus.

We saw fewer than a dozen Barrett or recall signs the entire trip, and four of them were in my SW-side Madison ’hood. Truth. Instead, we saw “I Stand With Scott Walker” signs, or a variant, every other mile. Many were handmade. (One just south of Fremont is pictured here.)

There’s another Wisconsin out there, my socialist acquaintances.

About the convention: high energy, and so many attendees that the party had to move out of the KI center downtown to the larger ShopKo Center across from Lambeau Field. If you’re wondering, there was a desultory demonstration fenced off from the convention hall. It was brief and numbered maybe 15 persons, more aimed at local congressman Reid Ribble than Scott Walker. Green Bay ain’t Madison! 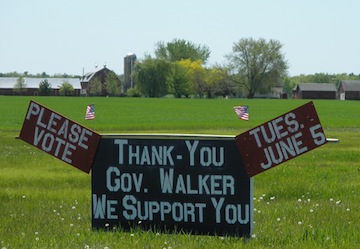 Tom Barrett is right about one thing: Scott Walker IS a rock star. (I could have had my picture taken with the flesh-and-blood governor but I don’t like standing in line, so I grabbed Nancy Milholland of the Racine Tea Party for this next shot.)

Walker dominated the convention, even when he wasn’t there. The best tip-off is that all four U.S. Senate candidates paid tribute to our courageous governor in their appeals for the convention’s endorsement. In the event, none of the four – Mark Neumann, Eric Hovde, Jeff Fitzgerald, or Tommy Thompson – met the required 60% threshold. Fair enough; the voters will decide in the Aug. 14 primary. Yes, more elections ahead!

Even so, Jeff Fitzgerald was the big winner of the convention. After three ballots, he emerged as the convention favorite of 51% of the delegates, followed by Neumann’s 49%. That may not win him access to the party’s resources, but he did win the hearts and minds of many party activists in Green Bay. It’s what is known as a boost.

My heart belongs to Tommy

My man Tommy Thompson (“Tom My Senator”) was eliminated on the second ballot but he’s still the most qualified. “Tough, tested, and ready.” The Rasmussen poll shows that he has the best chance of winning in November. That’s the name of the game.

People just like the guy. Reagan-esque in his love of Wisconsin and America; he redefined Republicanism in Wisconsin and nationally with welfare reform, school choice, and tax cuts. Scott Walker stands on his shoulders. Big tent. Can grow the party.

Hovde was eliminated on the first ballot and, to be honest, he lost me when he invoked the Ottoman Empire during a very esoteric speech. (Poly sci 101: don’t invoke Ottoman Empire.) His entire campaign feels like it dropped down from above from a helicopter that has yet to land on the soil of Wisconsin.

When I think of Neumann I hear Jerry Seinfeld exclaiming the name of his nemesis. But Neumann’s people are just crazy about him. He has the tea partiers, and they bring vitality to the party. The problem is his opponents think he’s just crazy. They accused him of packing the convention. He made some enemies with his campaign against Walker two years ago. 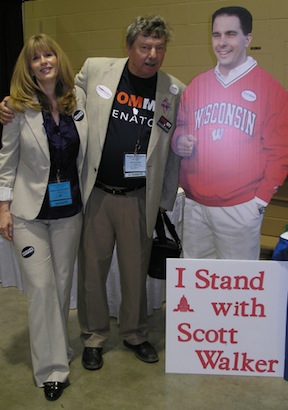 Is Jeff Fitzgerald the wild card? Jeff gave the best speech of the convention and it was persuasive to many good Republicans. The man came into the convention as an asterisk. He is the only U.S. Senate candidate with no personal wealth. Dad was a county sheriff. His campaign operates from check to check, and his organization is small. It showed at the convention. The other three handed out tons of campaign bling. The few Fitzgerald posters were lost amid the forest of his opponents’. (The paper mills of Green Bay must have put on an extra shift.) His hospitality quarters were sparsely attended Friday night at the KI Center.

On Saturday afternoon, the younger Fitzgerald brother (big brother Scott runs the Senate) gave the speech of the convention. It wasn’t the rhetoric that connected; we’re not talking Barack Obama or Mario Cuomo.

Did Young Fitz break out from the pack?

He did two very valuable things. First, he listed – not his promises for the future but the achievements of the last session of the Assembly: Voter photo ID. (We had to show a photo ID to register at the Ramada Inn.) Tort reform. A balanced budget with no tax increases or accounting gimmicks. Act 10 collective bargaining reforms that put the taxpaying voter in charge of government once again. Concealed carry. Castle doctrine. Defunding Planned Parenthood. (That got the longest applause.) Mining reform (which died in the Senate). A property tax freeze that lowered that tax for the first time since, well, Tommy Thompson. 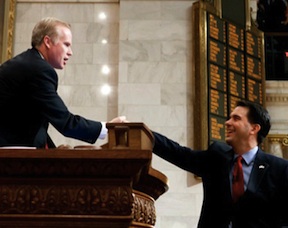 Fitzgerald acknowledged that most in his audience wish he’d stayed in the Assembly where he would be assured a second term as speaker. (Guilty as charged.)

Then Young Fitz gave the rationale for his candidacy. He did not recite – as the governor had done in his speech Saturday morning – the Paul Ryan quote: “Courage is on the ballot.” Ryan was talking about the June 5 recalls. But Fitz argued that the same courage was needed in November against the neo-socialist Tammy Baldwin.

Courage? Fitzgerald recounted the troubles of last February and March. How the police had to form a shoulder-to-shoulder cordon to safeguard his elected representatives through the obscenely gesticulating and spitting-angry, anti-democratic mob that had seized the Capitol.

“We have lost control of the Capitol,” police had told him. “We can no longer assure the safety of your members.”

Then there was the unruly mob that invaded the front yard of his home. Quote of the convention: “My 4-year-old daughter asked me, ‘Daddy, they can’t get in, can they?’”

His wife and two young children joining him on the stage at the close of his address. On the issues, Fitzgerald admitted, “There’s not a lot of difference between the four candidates. (But) I’m the only candidate who has had lots of death threats in the last 15 months.”

It didn’t hurt that his literature – and the image shown on the convention hall screen as he was nominated – showed Gov. Walker reaching up to the speaker’s podium to shake Jeff Fitzgerald’s hand. The image more than a little invokes Michelangelo’s God the Father sparking life into earthly Adam.

Coming: Blaska scores mucho political bling and the Lovely Lisa wonders, “When do the shenanigans start?”