For Winnie Karanja, the story of her scientific role model — Dr. Wangari Maathai, the first African woman to receive the Nobel Peace Prize — is proof positive of the impact that women, and particularly women of color, can have in the scientific and technology fields traditionally dominated by men. The many journeys women can make in STEM (science, technology, engineering, and math) have been a focus of Karanja’s recent efforts, and she intends to share that focus in a forthcoming community program.

Karanja is founder and CEO of Represented Collective, a local media company helping to tell the story of racial and gender inequity in the STEM fields. She holds a Master of Science degree in Development Studies from the London School of Economics and Political Science, and in 2019, she was named one of Forbes magazine’s 30 Under 30 Social Entrepreneurs. The very next year, she was named one of Forbes’ World’s Brightest Young Leaders for Racial Justice & Inequality.

She also founded Maydm, a Madison-based organization that provides STEM programming to young people in traditionally underrepresented populations. As such, Karanja is committed to racial and gender equity in the STEM fields. The often underrecognized contributions of women in these disciplines will be examined in a celebration and panel discussion on Monday, July 11, from 5:30 to 7:30 p.m., at Goodman Community Center, 214 Waubesa St., Madison. The panel will feature women of color who are leaders in STEM.

Combatting racism and sexism and exploring best practices in diversity, equity, and inclusion (DEI) also will be among the topics explored. “There is so much more that needs to be done in terms of practices to ensure retention and promotion within these fields, specifically for women of color, and that’s really my focus within this panel,” Karanja notes. “It’s going to be a mixture of a celebration and a panel discussion.

“The stories and the themes of the evening will include what inclusivity looks like for women and specifically women of color in the STEM fields,” she adds. “What is it that we can do? What are the barriers for entry? What are the best practices?”

According to the Pew Research Center, women still are disproportionately represented in the computing and engineering fields, as they constitute 25% and 15%, respectively, of each industry. In terms of pay equity, Black and Hispanic women earn the lowest amount of money — a median of $57,000 annually compared to $77,000 for men — in the STEM fields. In addition,  the Association for Women in Science (AWIS) reports that in 2019, women occupied only 26% of lab leadership positions in federal research and development centers, and women of color hold only 4% of those positions.

Yet their historic contributions, and their importance to Madison in building its technology sector, argue for a significant ramp up, especially in the executive suite. “When you look at representation in leadership positions, there is significant marginalization in STEM leadership but also in women being retained and promoted and not being as prioritized as men,” Karanja states.

In her view, the case for greater diversity in any industry goes beyond altruism and extends to workforce advantages and superior business performance. “The starting off point is companies should always want to be a reflection of the nation and the communities they serve and have the breadth and depth of expertise and diversity that we have,” she explains. “Essentially, there is a lot of work that has shown that diverse teams provide more equitable opportunities and that by having more diverse teams, you are reducing biases in R&D and product development.

“But also, companies with more than 30% women executives are more likely to outperform in profitability those that have fewer women in the executive suite. So, there is data showing that having more women in these spaces leads to profitability.”

Legends of STEM
More details about the July 11 program will be released in the coming weeks, but Represented Collective provided a sneak preview of the theme during Women’s History Month in March. The contributions of women in STEM were explored when the company held a monthlong interactive exhibit titled “Legendary” at nine Dane County libraries. To produce “Legendary,” which highlighted women who made STEM history but did not receive the same recognition as their male counterparts, Represented Collective used a $5 million UW–Madison grant designed to facilitate anti-racism in higher education.

The exhibit featured illustrated profiles and educational biographies celebrating a diverse set of legendary women in STEM. Their stories are as varied as that of movie legend Hedy Lamarr, who was best known for her work in films such as Samson and Delilah and Ziegfeld Girl, but is lesser known as an inventor. During World War II, Lamarr played a significant role in developing a patented frequency-hopping technology for radio-guided torpedoes, but decades later it was used to create the Global Positioning System, Bluetooth, and Wi-Fi.

For Karanja, the exhibit accomplished its key objectives — to help make the general public and young women in particular more aware of the possibilities for women in scientific and technology fields. “Our goal with the exhibition was to place the stories and histories of women, particularly women of color, in these public spaces for everyone to read and to learn about their contributions as a starting point for their own in-depth exploration,” Karanja says. “We had quite a bit of significant, positive impact in terms of response from the community.

“For so many people, we had feedback that they didn’t know about women such as Gertrude Elion and her contributions to the pharmaceutical field,” Karanja adds. “It made an impact … it was mostly around this entire community knowing these stories and then having a significant impact on young women who came to the exhibit.” 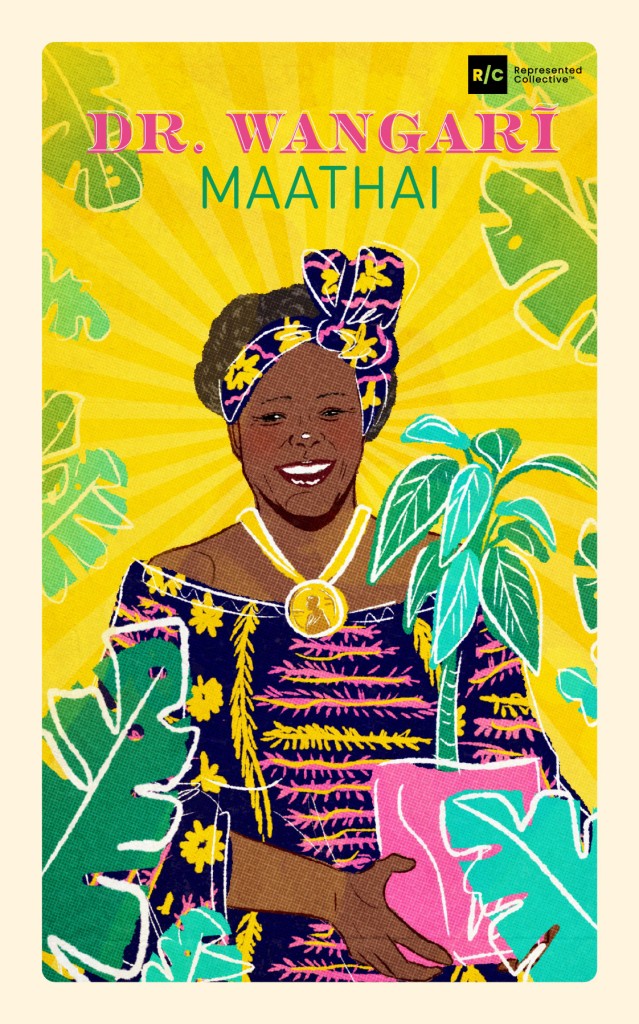 Karanja’s scientific role model, the late Dr. Wangari Maathai, also was featured. Dr. Maathai was a Kenyan scientist, author, and activist, and she championed an environmental initiative, the Green Belt Movement, that started at the grassroots level in 1977 and grew into a global cause. “This initiative that she worked on mobilized African women and had such interconnectedness between local and global efforts in sustainable development and human rights and environmental conservation,” Karanja notes. “It was inspiring to see somebody who went on a journey from something that started at the grassroots and grew all the way into 2004, when she was awarded the Nobel Peace Prize and was the first African woman to receive the award.”

Maathai died of complications from ovarian cancer in September 2011, but not before leaving an overwhelming impression on Karanja and others. “She was the one who served as such a strong model for me, as someone who is Kenyan, as someone who is African, but also seeing how her movement started from her own personal conviction and then the journey she took to get there,” Karanja adds. “For me, it really points to the fact that no matter where your story starts, your impact can be grand. Her recognition at such a global level is powerful.”