As in the great Jerzy Kosinsky book/Peter Sellers movie Being There.

I did think Ryan, if he took another swig of water, might have to repeat the Lt. Drebin bathroom break, complete with live lapel mic.

Good point from Biden: Make the tax pledge to the middle class, not to Grover Norquist. Good retort from Ryan: The unemployment rate of Biden’s hometown of Scranton, Pa., is 10% now, up from 8.5% when Obama-Biden took office. Good line from Biden: “That’s a bunch of stuff.” Good translation of the word “stuff” from Ryan: “That’s Irish.”

A great debate, Thursday night. This moderator, like Jim Lehrer during the presidential debate, was a good hockey referee. She dropped the puck and then got out of the way.

The Bureau of Labor Statistics numbers are all FUBAR. Isn’t this what Scott Walker has been saying all along? Second question, for extra credit: With the exception of Warren Buffett, is any living business leader more revered than retired GE chairman Jack Welch? Hardly a partisan; nor has he been fitted for a tinfoil hat. Welch explains why he is dubious that the nation’s unemployment rate dropped below 8% just in time for the presidential election. What a co-inky-dink! First, there is methodology:

If an out-of-work accountant tells a census worker, "I got one baby-sitting job this week just to cover my kid's bus fare, but I haven't been able to find anything else," that could be recorded as being employed part-time. The possibility of subjectivity creeping into the process is so pervasive that the BLS's own "Handbook of Methods" has a full page explaining the limitations of its data …

Then, there is economics itself:

The economy would need to be growing at breakneck speed for unemployment to drop to 7.8% from 8.3% in the course of two months.

Blaska’s Bring It! read: The economy is just beginning to dig itself out from under the Big Gummint-directed bad money bomb.

Ann of Althouse asks this most important question: Even if Obama thought first – or even only – about re-election, how could he have chosen to lie the way he did about Libya?

Did Obama think he could get away with this lie long enough, and why was he not daunted by the risk entailed in going on and on, doubling down on the lie, and even lying in a U.N. speech? How did he have the nerve to co-opt our U.N. ambassador, Susan Rice, and subvert her credibility and honor? How did he get this millstone around the neck of Hillary Clinton, 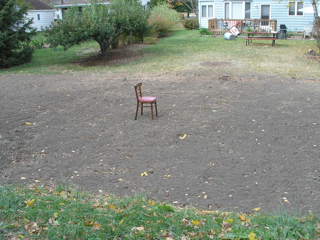 Has President Obama taken up gardening? Blaska’s Bring It! reports; you decide! Picture taken from Madison’s Southwest Bike Path between Odana Road and Glenway Street. In Madison! Where liberals vote! Where our children play with their union-approved toys!

To what end does Dave Blaska, in his Saturday column, ask us to seek the root causes of Meadowood's ills? … Blaska implies that it is Section 8 housing, food stamps, free meals and other goodies. So that he can have someone to blame – other than himself – for the neighborhood's demise? … Are people involved in these government programs asked to join the neighborhood associations or welcomed to the area?

Yes, it’s all my fault. Or Lisa Veldran’s. She didn’t invite the Devil’s Disciples to join the neighborhood association.

Not invited to join neighborhood association, Part the Deux: A man with a scarf covering his face robbed a south side store Monday night just before closing time, police reported. The robbery was reported at 9:49 p.m. at Walgreens at 4631 Verona Road, according to the Madison Police Department.

Quote of the Week #1: “Any other president who flew to Las Vegas for a fundraiser hours after the killing of the U.S. ambassador in Libya would have been crucified … But Obama wasn’t.” – Fred Barnes, Weekly Standard, Oct. 15, 2012.

Quote of the Week #2: “Mongo just pawn in game of life.” – Alex Karras, who died this week, in the movie Blazing Saddles.

Tammy, tell us true: "Tammy is a gun owner herself, supports the 2nd amendment and is proud to have strong support from Wisconsin sportsmen across the state." – Statement from Tammy Baldwin for U.S. Senate campaign.

Let’s see now. In 2008, Baldwin voted in favor of the District of Columbia law banning firearms even from the home. In 1996, Baldwin voted against amending the Wisconsin Constitution to guarantee “the right to keep and bear arms.” Maybe “sportsmen” if you count The (former) Kathleen.

Trouble at union hall, XIX: Marty Beil’s state employees union seizes $45,000 from breakaway corrections officers at seven lock-ups who want to form their own union. Beil is the political expert who bet the farm (and his union’s dues) on The (former) Kathleen. Milwaukee Journal Sentinel has the story.

The Walker revolution continues: Now even UW-Madison is breaking the sclerotic hold of unionism. A friend of mine, a supervisor at the university, as apolitical as a yardstick, refused to fill a vacant position rather than admit to her workplace a chronic malcontent and underachiever who was “bumping” into the position. That abuse is now being eliminated.