As Gov. Walker works on putting his next two-year state budget together, he has asked each of his cabinet members to submit a proposal based on a 0% increase for their respective departments. Makes sense. At least start from that premise and then see what adjustments are necessary. Right? Well, the Department of Transportation followed directions and submitted its no-increase budget. It is definitely instructive.

For all of you out there who have convinced yourselves that there is plenty of money in Wisconsin’s transportation fund to meet our needs if we simply concentrate on maintaining what we have, you need to read this proposal. Simply put, you are delusional.

WisDOT’s proposed budget freezes aids to locals at current levels. Transit is frozen at current levels. The Local Road Improvement Program is cut by $10.6 million. It slashes the amount for major highway improvements by over 35% and reduces the amount available for the rehabilitation of state highways by nearly 10%. As far as maintaining what we have at the state level, WisDOT estimates nearly a quarter of the state highway system will be in “poor or below” condition at the end of the biennium.

According to the WisDOT budget submittal, the cut to the major highway program will result in the following project delays:

Directly below this chart in the WisDOT budget request is this one-sentence caveat: “If these reductions are not restored in the 2015-17 biennium, the above changes will hold and the HWY 39/90 project will be delayed 2 years.” Allow me to translate that sentence for you. The delays listed on the right side of the table are based upon the belief that, to quote Annie, “The sun will come out tomorrow.” I think the more accurate description is, unless there is legislative action to increase funding for transportation, the delays will be “indefinite.” If we don’t have the political will to increase the funding this biennium, what leads us to believe it will be different in the next?

And what about the Zoo, the busiest interchange in our state? Under WisDOT’s proposal, it is still a top priority, but funding for that project is reduced by $300 million, which will push completion back at least two years. Again, this delay assumes “a significant funding increase will be needed in the 2015-17 biennium.”

Funding for these important projects is unlikely to just appear. Unlike the general fund, even an economic boom will not change the picture in the transportation fund in any significant way. Revenues from gas taxes and registration fees do not correlate to economic activity in the same way as sales and income tax revenues. So while the general fund situation has improved with an uptick in the economy, the transportation fund has not been so fortunate, nor will it be in the future without legislative action.

Communities across the state are unhappy – to say the least – with the reported delays to projects they view as critical to their local economy. Unfortunately for them, these expected delays may be the best-case scenario. The only way to move up one project’s timeline without increased funding will be to win a political power play at the expense of another project in some other area of the state or another sector of the transportation fund like local aids or transit.

As the Transportation Finance and Policy Commission gets ready to submit its recommendations and the governor and Legislature prepare to debate the upcoming budget, there will be plenty of people decrying any suggested increases in funding whether through transportation user fees or by dedicating some level of general fund dollars. That is fine. Budgets are about debating and deciding upon priorities.

But it is impossible for anyone to pretend any longer that failing to address the state’s stagnant transportation fund won’t have a real and noticeable impact on communities across the state. I would further argue that the upside of maintaining our system while keeping these projects moving forward far outweighs the extra $10 or so a month it would cost us.

Referring to the long-awaited U.S. 10-State 441 project and U.S. 41 interchange upgrade, Rep. Dean Kaufert (R-Neenah) said, “It’s actually hindered growth here in the Fox Cities and it’s time for us to step up to the plate. I’m going to stress to the governor that this project can’t wait and we’ve waited long enough.”

Of course, he’s right, but so are the other people around the state with similar arguments. This very real budget proposal belies the theory espoused by some, which claims that by simply staving off any new construction we will have enough money to keep our current system in good condition.

The problem is the projects that some have defined as “new” are either necessary replacements of sections of the interstate that after 50 years cannot be resurfaced any more or vital projects to area economies or both. The Appleton Post Crescent refers to the same interchange as Rep. Kaufert when stating, “It’s not just a traffic or a convenience issue. It’s an economic development issue. Local officials will tell you that they have trouble drawing development to the area around the interchange because of the ridiculous access problems.”

Now, some people – those on the opposite end of the spectrum from the crowd that thinks we have enough if we just don’t build or rebuild anything – may advocate moving these major projects forward at the expense of funding for our county, town, and municipal roads. I will tell you that is equally preposterous.

First of all, local governments have already seen the state’s share of the cost for maintaining local roads decline over the past decade. The result is increased pressure on property taxes.

Secondly, in order to get these major projects back on schedule, you would have to decimate local programs.

Finally, while the major projects listed above are certainly important to area economies and the overall economy of Wisconsin, I will give you more than 77,000 reasons why Wisconsin’s network of county and municipal roads is absolutely critical to Wisconsin. Farms.

In my last blog, I talked about manufacturing in Wisconsin and its reliance on our transportation network. I don’t think I have to explain to anyone in the Dairy State that our farms, 98% of which are still family owned, are dependent upon county and town roads from Shullsburg to Crandon and everywhere in between. In fact, TDA’s second installment in the series we call Big 10 Transportation Truths answers the question “why does transportation matter?” quite succinctly: “More than 77,000 Wisconsin farms.” Take a look. I bet there are some facts about Wisconsin farming and its link to transportation you didn’t know: 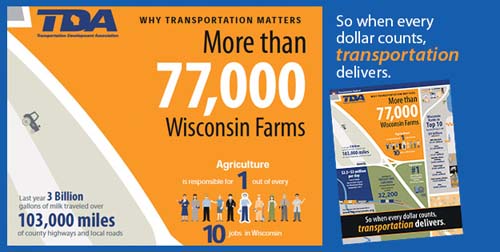 Anyway, back to the blog. I am here to tell you that robbing Peter to pay Paul is not an option. Both Peter and Paul are tapped out. And unfortunately, Annie may be “betting her bottom dollar that tomorrow there’ll be sun,” but as for me, I’ve never cared for musicals. I mean who just breaks out in song for no good reason? Here’s an idea. Let’s address the actual problem and adjust our transportation user fees. The payoff will be real rather than imagined.