Outdoor barbecue smoke gets in my eyes

First, a small, post-Memorial Day weekend’s respite from politics, then we jump right back into the fire.

I am told that it is possible to program the Jenn-Air stove in the kitchen of the Stately Manor to cook the Christmas roast while the indentured servants are away. The brainy machine turns itself on and off at the instructed times, maintaining the proper temperature throughout.

Even simpler is the microwave, which these days has specialized settings for potato and pot pie, softening a stick of butter, or preparing a frozen entree.

So why do I so much enjoy wielding fork and tongs over a smoky outdoor grill on a hot day? Well, beer helps, sure. This being Wisconsin, when the weather is nice, I got to be outdoors.

There is something elemental, something satisfying about firing up the charcoal (briquette and chunk), manipulating air vents to regulate the temperature, managing the heat deflector, dexterously moving the food from hot spot to warm spot. There’s an art to the fire, extra flavor in the food, satisfaction in the effort.

For our wedding present 38 years ago, my Aunt B, a Navy nurse captain stationed in Japan, gave us our first kamado. Ancient in Japanese culture, its ceramic construction holds in moisture like nothing else.

This spring, R2-D2, as we had nicknamed it, crumbled into pieces. Time for a replacement.

Lovely Lisa, shopping for plants at Johannsen’s, looked across the way to see a young fellow firing up some chicken breasts and sliced zucchini at Madison Brick & Block. Two days later, I was scarfing down salesman Dave’s grilled feast. Normally, the breast is my least favorite piece of chicken because, usually, it is so dry.

Not the chicken cooked in a kamado. (It would be called a tandoori in India.)

So I took one home after Dave promised to throw in a bottle of seasoning salt he was using. (Do I drive a hard bargain, or what?)

I fired up the charcoal-fueled beast over the Memorial Day weekend – being ceramic, it is in no danger of blowing away. Sure enough, my chicken breasts were juicy as could be and – this is the trick – completely cooked! No pink! (That’s a meat temperature probe around my neck.)

Fired with a renewed interest in grilling, I discovered a great website for outdoor cooks called AmazingRibs, although it is about that and everything else one might throw on an outdoor grill.

The proprietor calls himself Meathead. He captures the zeitgeist of outdoor grilling:

“We do it the same way our ancestors did. Our noses lead us to meat roasted by live fire and we eat without forks or linen. Just pig on a stick, grease and goop on our faces. The meat is ethereal, kissed by smoke, hugged by sauce, and licked by fire. ‘Don’t play with your food’ doesn't apply when you're eating barbecue. If you don't get it on your shirt you're not doing it right. This is primal, elemental, sensual eating. Pure carnal joy.”

Meathead surveys every kind of meat. There are 91 entries in the chapter on pork alone, including skirt meat, butterfly chops, blade roast, and something called flap. (See Porknography.)

He also does reviews on all manner of wood-burning ovens, smokers, small tailgate grills, whole-pig roasters on trailers, and hibachis, and has a chapter of photos on “grills gone wild.”

Meathead tackles the charcoal or gas argument (the equivalent of Stones or Beatles). (Spoiler alert: both!)

Thus equipped, I invited Ann of Althouse (shown below) and New Media Meade over to the Manor for some Alton Brown-rub ribs and some wine on a stormy Memorial Day. A tour of the grounds featured my ongoing project of mulching Lady Oak entirely with spent wine bottle corks, a life’s goal to which I am assiduously committed. 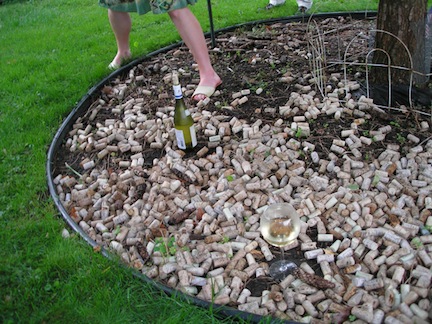 •  Marquette University Law School is out with a poll today that has Walker up on Barrett by 7 points, 52% to 45%. That compares to a 6-point lead two weeks ago when it was 50%-44%. The poll has a margin of error of plus or minus 4.1 percentage points.

“The Obama campaign is bracing for Wisconsin Gov. Scott Walker to survive his recall election next week, denying that a victory means anything for President Obama's chances in the fall.

"'This is a gubernatorial race with a guy who was recalled and a challenger trying to get him out of office,’ Obama deputy campaign manager Stephanie Cutter said on MSNBC Wednesday. ‘It has nothing to do with President Obama at the top of the ticket.’”

On Friday, poor Mr. Ed on MSNBC spent five minutes in a fawning plea for The One to come to Wisconsin and save Barrett’s bacon.

• Last week on Kathleen Dunn’s WPR radio program I debated Milwaukee radio personality Earl Ingram. Subject: the recall. Ingram insisted that Milwaukee’s economy would be gangbusters by now if only Scott Walker hadn’t scrubbed the high-speed train project. (Such is the belief in certain quarters in the power of government stimulus.) I parried that some jobs would likely have accrued, but at what cost to the taxpayer, at what benefit to the economy?

Now CNN is reporting that the “proposed high-speed rail line in California was touted as the transportation of the future. But after billions of federal stimulus dollars were pledged to build it, the project is plagued with problems.” Gee, never saw that coming.

• The Left is fine with misogyny, as long as it is against conservative women, notes Rachael Larimore in Slate.

“Donna Dewitt, the outgoing president of AFL-CIO South Carolina, bashed a piñata bearing a photograph of Gov. Nikki Haley, while men and women in the crowd shouted ‘Whack her harder’ and ‘hit her again.’ Dewitt continues to smack the piñata long after it’s knocked down, which is a nice touch. … It’s tiresome to hear someone preach about tolerance while only being tolerant toward those with whom they agree. But that has become par for the course.”

Especially if you are a regular listener of the Slymer. I’m going to see Nikki Friday in Madison, with Scott Walker.