Occupy Site Is Marketplace of Failure

Downtrodden Madisonians are victims … of their own self-destructive lives

You may have missed it these past few months, negotiating the heavy traffic on Madison’s East Washington Avenue. Set back from the roadway on the bare asphalt of a vacant used car lot, amidst burn barrels, biffies, and dirty snow, the motley crew inhabiting a small tent city posts this message for America: “Not for Sale.”

They need not worry, they have nothing I want to buy.

Unless, of course, you’re in the market for failure. This squalid village of squatters is “Occupy Madison,” the local incarnation of the nationwide movement, however evanescent, that the socialists of The Nation magazine and MSNBC once hoped would become the more-government counterpoise to the Tea Party.

Their misery has company. The vacant auto dealership showroom next to the Occupiers has become a daytime warming shelter for homeless men, thus freeing up the unfortunate denizens to devote more time to their life’s pursuit: permanent intoxication. Discarded bottles of beer and booze in the surrounding neighborhood testify to their success. Together with a patch of mud behind them known as Reynolds Park, location of various liberal protest gatherings, these three blocks have become an ongoing crime scene.

In a 150-day period over this fall and winter, the three venues tallied 80 police calls – more than one every other day. Theft, fighting, trespass, property damage, noise complaints, drugs, unlawful weapons, sexual assault, and public intoxication were the predictable manifestations of all this responsibility-free liberal compassion. 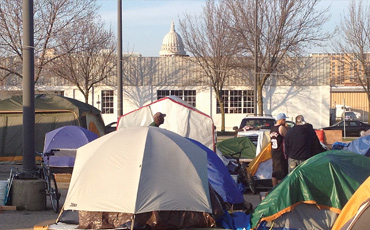 Unable to find employment after achieving their master’s degrees in women’s studies and comparative Marxist theory, the original Occupiers of Wall Street demanded their student loans be forgiven. On the West Coast, their answer to The Great Recession was to forcibly close the Port of Oakland.

The good progressives who inhabit Madison’s Isthmus will tell you that the winos and the car lot occupiers are victims of our capitalist system, ground down by the manured heels of racist birthers, NASCAR fans, and the impossibly busy Koch Brothers. Canaries in the coal mine. (Down with coal! Ban all mining!) We’re next, our lefty friends tell us, unless Scott Walker reverses course and orders the state of Wisconsin to halt his war on the middle class and resume the forcible collection of AFSCME union dues.

The societal Superfund Site on East Washington Avenue may very well represent what U.S. Rep. Paul Ryan called the tipping point, “where more Americans depend on the federal government than on themselves for their livelihoods – a point where we, the American people, trade in our commitment and our concern for our individual liberties in exchange for government benefits and dependencies.”

Liberal activist Sandra Fluke will take Door Number 2, thank you, Paul. Let’s speak more circumspectly than did Rush Limbaugh. This professional victim is willing to cast aside all self-respect and demand the government pay for her birth control pills just as the Milwaukee teachers union sued for taxpayer-subsidized Viagra. She chose to attend a private law school in order to bend the Catholic Church to her desires.

The same entitlement mentality enables the 46% of Americans who pay no taxes to complain that the remainder do not pay enough. I want. You got.

A few blocks down the street from Madison’s shrine to victimhood, a young Hispanic woman named Dina (pronounced “Deena”), dressed in verdigris-colored robes and crown, waves at passing motorists. She was playing Lady Liberty to drum up business for a storefront tax preparation service.

To be honest, I don’t know her background – whether she has children to support or college to pay for. She wouldn’t tell me her wage, except that it increased in colder weather. There are some who might pity her costume as degrading and her task as menial. I don’t. Dina knows that the first job leads to a better job, that you can’t get something for nothing. With her work ethic, self-respect, and customer focus, she embodies what made America great. I waved back at this friendly beacon to the bills-paying taxpayer.