My conservative friends (and you are all my friends) are outraged at the U.S. Supreme Court’s decision on Thursday upholding ObamaCare. I am not.

To be sure, the decision came as a surprise. I think one and all were expecting a decision the other way. Americans are a bit confused (as Frasier’s “tossed salads and scrambled eggs” theme song would have it). We are now following Nancy Pelosi’s advice, trying to find out what exactly is in the bill. As Justice Kennedy joked, making the court read its 2,700 pages is cruel and unusual punishment.

The court majority’s rationale is confusing, to say the least. Requiring Americans to purchase a product would violate the Commerce Clause – fair enough. But taxing those who declined to make the purchase is permissible? Come again?

• The $2 trillion program is a tax. On this, Chief Justice John Roberts has overruled President Barack Obama. This is what is called “campaign fodder.”

• ObamaCare is government’s hostile takeover of one-fifth of the American economy – a boon to regulators and penalizers, lobbyists and special pleaders. The Gallup polling organization has found that nearly two-thirds of Americans believe Big Government is more of a threat than either Big Business (26%) or Big Labor (8%). You want to take the money out of government? Take the power out of government.

• There is no free lunch. The legislation represents a huge redistribution of wealth and, increasingly, its creators resent giving to the takers.

• High-quality health care plans will be dumbed down (except for favored labor union plans), a socialistic leveling that will excite Fighting Ed and his followers, especially since the NFL Players Union will be exempted.

• ObamaCare requires a huge leap of faith to believe that the federal government, operator of the U.S. Postal Service, perpetrator of Fast and Furious, will hold down costs and provide better service.

• Finally, what is the best guarantor of health care for all? A vibrant economy! More jobs! You got a job? You probably have employer-subsidized health care or, at least, the income with which to purchase health insurance. But growing the government was Pelosi-Reid-Obama’s goal, not reviving the economy. Today, unemployment stands at 8.2% (was 6.8% four years ago). Now there are 44.7 million Americans on food stamps (was 30.9 million four years ago). Two million more Americans unemployed. 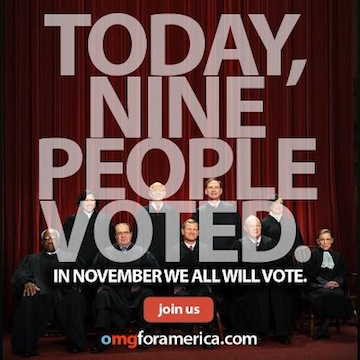 But I am not outraged at Thursday’s narrow court ruling. Here’s why: The health care issue is best decided by the people and their elected representatives. ObamaCare, IMHO (well, not so humble), never presented a clear-cut constitutional issue. No way was it even close to the clear violation of the Constitution posed by the McCain-Feingold gag on disfavored political speech. (That clear assault on individual rights was overturned by Citizens United in 2010, Roberts for the majority.)

No, the court’s verdict in the present case is what should have happened in Roe v. Wade a generation ago. Abortion is an issue that should have been resolved in a national conversation, not by a ruling based on some supposed “penumbra” said to surround the Constitution. Forty years later, America is still groping its way toward a consensus.

Neither debate – over health care in the present and abortion then – presented a clear constitutional issue. They were always political issues; the answer always was to be found in legislation, not litigation.

Make no mistake, just as Roe v. Wade energized the Republican Party with an injection of social conservatism, the court’s 5-4 ruling on ObamaCare will energize the Republican cause this fall. Let’s remember that it was ObamaCare that gave rise to the Tea Party. The conservative cause responded by retaking the House of Reps in 2010, narrowing the gap in the Senate, and sweeping the field in Wisconsin.

Americans aren’t stupid. An ABC/Washington Post poll found 55% of Americans oppose the health care law, while just 37% support it. Rasmussen this week reports that 54% of likely voters want the law repealed. In a New York Times/CBS News poll, two-thirds wanted either the individual mandate or the entire law to be found unconstitutional. (The polls.)

Let the debate continue; let the people decide. I trust them to continue to sift and winnow.