If he’s serious about ending what he describes as Wisconsin’s “civil war.”

But first, a quiz: When is the last time a Democrat(ic) candidate avoided appearing in Madison?

Tom Barrett avoided a “unity” rally planned for Madison as if it were a toxic Superfund site. The photograph in the Wisconsin State Journal on Page A-7 explains why. There in the foreground, wearing a thousand buttons on his black hoodie, is a particularly obnoxious loudmouth known as “Anarchy Guy.” (He blew his vuvuzela at The Squire at the April 14 Tea Party rally at the Capitol, the little coward.)

Pictured just over his shoulder is Segway Jeremy, who has made a specialty of harassing lawmakers as they go about their business. The faces of The Movement.

Why didn’t Barrett want to come to Madison on Wednesday? As the political consultants would say: bad optics. No use reminding Wisconsin of the (clear throat) unpleasantness. 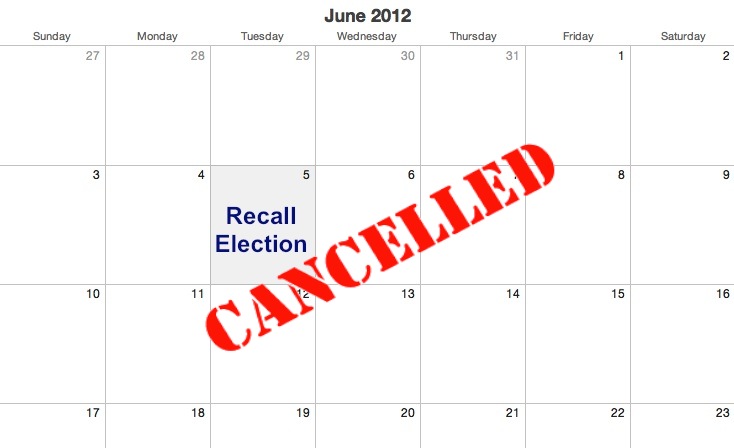 I wrote in Wednesday’s Bring It! that Barrett was not harmonizing with the Solidarity Singers in his victory speech from Milwaukee Tuesday night. Let’s be more specific: the words “collective bargaining” never escaped his mouth.

Collective bargaining is nowhere in his priorities – at least, not that he will admit before the election.

So what are the mayor’s issues? More jobs? Start at home, Mr. Mayor. Milwaukee lost 4,400 jobs from March to April, according to the BLS. (Should have recalled Jim Doyle, who lost 150,000 jobs.)

“End the civil war?” Then tell socialist provocateur John Nichols to put down his megaphone. Tell Jesse Jackson and Michael Moore to stay home. For that matter, say the same to Sen. Mark Miller and the rest of the Fleeing 14. Tell the Crapper to get back to work. Tell the Slymer to start speaking with a civil tongue. Tell Mary Bell and John Matthews that teachers are professionals, not Third World tsunami victims. Tell Marty Beil that government employees in Wisconsin have job security and fringe benefits that are the envy of the private sector. Tell the Madison crowd that taxes are already high enough in Wisconsin. Explain that you can’t share revenue that you don’t have. Get out a map and point to Greece. Declare that socialism is for losers.

You really want to end the civil war? Then proclaim you, Tom Barrett, will begin the healing this very day. Remind everyone that this state gives its governors four years to succeed or fail. (We gave Jim Doyle eight years to fail.) Announce that you will wait until 2014 for the re-do of the last election, thank you very much.

Tom Barrett (think Reagan at the Berlin Wall), Call off this Recall!

Otherwise, your candidacy stands for nothing more than sour grapes for losing to Walker not 18 months ago.

Congratulations to Clay Barbour of the State Journal for getting onto the story of the near total repudiation of the union message. (“Insiders question power of union backing …”) His quote of Mordecai Lee’s description of the unions as a political “empty suit” was delicious. All the more so since Lee is a former Democrat(ic) lawmaker.

“Kathleen Falk says lack of name recognition was her downfall,” according to The Capital Times. Is that why she lost 58%-34% statewide? Because this was her third statewide race? No name ID? Do people recognize The Former Kathleen’s name here in Dane County, where she was county executive for 14 years? Then why did she lose even bigger here, by a 62%-31% margin?

OK, I’m done trashing the lady. Unless she starts a blog.

But the sad thing is that her Dane County numbers are undoubtedly inflated. I know of several conservatives hereabouts, with malice aforethought, who crossed over into the Democrat(ic) primary to cause mischief. Hint: they weren’t voting for Barrett.

I wrote early Wednesday morning that Walker, with no serious opposition, nearly outpolled all four Democrats. On the other side, I also noted that the real Democrats (minus the fake Democrat but plus the fake Republican) barely garnered two-thirds of the 910,000 recall petition signers.

Brother Wigderson has crunched some serious numbers that make a convincing case that Gov. Walker – with no real challenger – actually did outperform the Democrats. Wiggy cites the over-vote in the lieutenant governor’s race, in which there were 87,792 more votes than in the governor’s race. Usually, one would expect the opposite, if anything. None of the lieutenant governor candidates is well known and the office is less important.

What happened? After voting Walker for governor, his supporters then visited the Democrat(ic) side of the ballot to throw some love at protest candidate Isaac Weix. Visit Wigderson’s Library and Pub for that analysis. Then come back here!

• Sure enough, a Rasmussen poll out today shows Walker retains a five-point lead on Barrett. You ancient history buffs will appreciate this: that’s the same margin by which Walker beat Barrett in November 2010. Accurate? Rasmussen early on showed that Ron Johnson was beating Russ Feingold.

• The Walker campaign today is asking Tom Barrett just how, exactly, he would have addressed the $3.6 billion deficit that Scott Walker inherited.

• Struggling young writer Christian Schneider got off the line of the week on his NRO blog yesterday: “Last night was a big election day in Wisconsin. Or, as it has come to be known to Dairy State residents, ‘Tuesday.’”

• President Obama now supports gay marriage. Fair enough. So how will his party’s national convention play out in Charlotte this summer in a state that just voted to ban same? Stay tuned, as they say.