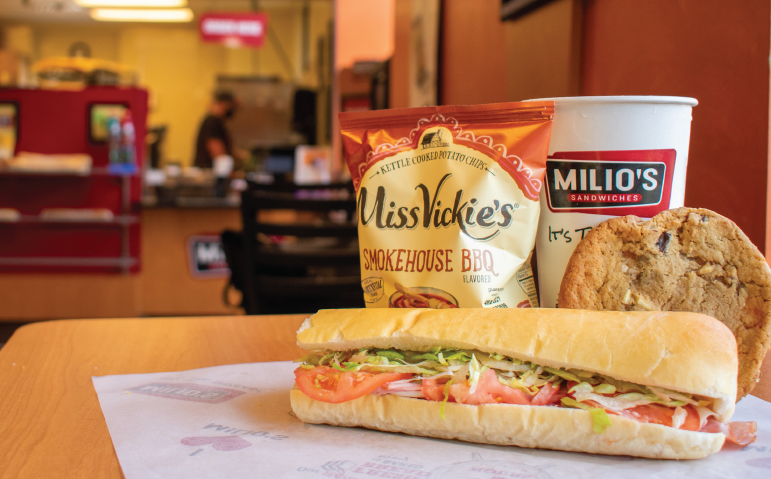 A homegrown staple has been acquired by homegrown business talent, and the new ownership group of Milio’s Sandwiches not only wants you to buy local, but they also want you to buy from local. Brian Bergen, the new majority owner, knows that’s largely up to him and his close-knit partners, and the changes they have discussed making over the forthcoming year — especially plans to add new items to the menu — could go a long way.

Bergen leads an ownership group that will continue Milio’s history of local ownership that began in 1989, when the company launched as Big Mike’s Super Subs. Channeling the late Victor Kiam of Remington fame, the new owners loved the sandwiches so much, they bought the company, but there is more to their interest than that.

While some things established during the pandemic (safety and sanitary COVID rules) will likely remain the same, and some changes already have been announced — new menu offers and promotions, a new loyalty program, and mobile app enhancements — Milio’s customers might notice some nonfood alterations as public orders loosen and as they fully emerge from their pandemic cocoons. 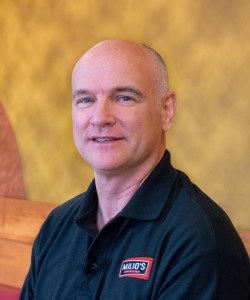 For example, they might notice new cash registers, which might not be what Bergen calls “a delicious change,” but they should help management better track any changes in customer behavior. In his communications with customers, Bergen gets a lot of input about the menu, but he also needs to validate their preferences with hard sales data, and that’s what the new registers should help, well, register. “They allow us to gain better insight into how the stores are performing, what they are performing with and, as we make changes, how those changes are received by customers,” Bergen explains.

As the new ownership group contemplated its acquisition, one point that kept coming up was that Milio’s menu, where the sandwiches are marked by both numbers and names, really hasn’t changed much lately. While there is always some level of risk in tampering with a successful formula, and some things won’t change (the signature fresh-baked bread), menu changes are part of ongoing discussions. “It’s really due for a change,” Bergen states. “It could use some freshening up.”

Asked whether pandemic-related services like curbside pickup will survive in the post-pandemic period, Bergen pivots in another direction, noting that any new stores that are added as Milio’s expands will definitely have a drive-thru option. Drive-thrus are more convenient for everyone, and for people who still want to be on the safe side, they accommodate physical distancing, and they feature a natural glass barrier between employee and customer.

“Whenever we open a new place, it’s going to have a drive-thru because if we’ve learned one thing during the pandemic — and not necessarily intentionally — it’s that people like the drive-thrus,” Bergen says. “That’s something that we’re going to continue to move toward as opposed to curbside pickup. Drive-thrus are more convenient.”

The sale
The new owners’ due diligence on a possible Milio’s acquisition actually began in the early days of the COVID-19 pandemic, just as fast-service restaurants were deemed essential businesses. Thanks to a relaxing of public orders (Dane County has doubled the size of its permitted gatherings for inside space to 50% of capacity), progress with vaccinations, an improving national economy with nearly 1 million new jobs in March, and growing sales receipts as summer approaches, Bergen now sees light at the end of the pandemic tunnel. But what about last April, when the pandemic poured cold water on business activity?

Their faith in the Milio’s brand and workplace culture had a lot to do with their interest. In addition to Bergen, the new ownership group includes Madison natives Timm Heller, Todd and Tony Mancusi, and Chris Gentilli — a group that has long-standing ties to Milio’s. Gentilli was Milio’s first franchise owner in 2004, the year the company began franchising and changed its name to Milio’s Sandwiches.

“Whenever we open a new place, it’s going to have a drive-thru because if we’ve learned one thing during the pandemic — and not necessarily intentionally — it’s that people like the drive-thrus.” — Brian Bergen, Milio’s

Four years later, Bergen’s wife, Carol, franchised the Milio’s Sandwiches on East Johnson Street, Milio’s first Madison location, along with Heller. Heller and the Mancusis have been in the food industry for over 20 years while working with another franchise group. All of the franchise owners have been with Milio’s for at least 10 years. New President Gerard Helminski started working at Milio’s as a food vendor at the company’s inception.

While Bergen was never involved in the day-to-day operation of the East Johnson Street store, he certainly felt like extended family. He admired cultural aspects such as employees wearing badges on their hats to indicate how long they’ve been employed there, and he had a particular fondness for the No. 8 “Big Steer” (roast beef, smoked ham) sandwich. “I certainly had a front-row seat to how Milio’s worked inside and that was the time I really fell in love with the food,” he states. “I always liked Milio’s, but when my wife became an owner, I realized they had quality stuff. I saw the inside of it, and that really started me on road to saying, ‘Whoa, that’s what I really want to do.’”

Deferring to Carol’s business acumen, he’s not necessarily obsessed about the business climate or the possibility of a steep increase in the minimum wage. In fact, it was Carol who told him that every business owner is a dreamer, a realist, and a hard-nosed person, and Brian gets to play the role of the former, which is fine for an acknowledged “big picture” type. “I’m really not worried about the day-to-day operation,” he states. “I’m more concerned about what we can do to enhance our product. What can we do to enhance our customer experience? I became a part of Milio’s in 2008 and I kind of fell in love with it, and not as the insider. I get to come to the table now and ask a whole lot of questions of Timm and Gerard that maybe haven’t been asked. Maybe they are dumb ideas, but I get to come in with lots of questions and enthusiasm about what we can be.”

What becomes of Milio’s and others in the post-pandemic period could depend on the intensity of a trait that characterizes Madison — buy local. Bergen, for one, believes that trait will be essential if local small restaurants, independent retailers, and other small businesses are to make a successful transition out of the pandemic. He notes that himself, Heller, and the Mancusis are Madison West High School alums with strong roots in the community, and although Milio’s now has 200 employees who work at 21 franchise and company locations across Wisconsin, Minnesota, and Iowa, its roots are planted in Madison.

“I can’t stress buying local enough,” states Bergen, who grew up on Regent Street. “Local is just a win-win for all local companies. If you’re not going to buy a sub from me, buy it from somebody else who’s local. The money stays in Madison. The money stays in Dane County. We deal with the high schools a lot. We support the Boys & Girls Club, the United Way, and Special Olympics. We do a lot in our community, and we can only do that if we stay in business, and the best way to stay in business is to have loyal customers. People in Madison really do like the idea of local. It’s just that sometimes, it’s not always easy to know who is local.”

Put on the spot with a question about who had more influence in his decision to invest in Milio’s — wife Carol or her business partner Timm Heller — Bergen cries foul before giving the only answer a husband can. “Carol,” he states, smartly.

Now, that’s the kind of local buy-in required to succeed in business.