Continuing with our December theme of holiday memories, here are more submissions from area businesspeople who are happy to share their special times with you this week.

Our family business, Slack Attack, coordinates the Holiday Fantasy in Lights for clients NECA and IBEW. One Christmas Eve there was a big blizzard; the volunteers scheduled to work the exit booths at the event could not make it in. 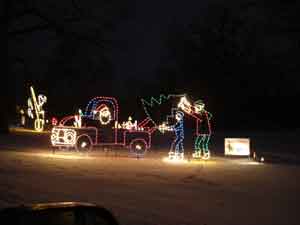 We live fairly close, so we packed up our holiday family and friends and took everyone down to Olin Park to work the shifts. We were a little disappointed that we would be missing our usual Christmas Eve ritual, but after handing out candy canes to a few cars that were exiting the event, our spirits lifted. Everyone was so joyous and thankful.

Car after car of kids and couples and dogs and grandparents passed through with greetings and thanks for the candy canes and lights. It was very rewarding to be in contact with so many people on the holiday and see their enjoyment from spending time with one another admiring the lights. The lights certainly are beautiful, and the memories made enjoying them with loved ones, even more.

My best holiday memory started in 2003-04 and has continued throughout the ensuing years. 2004 was the first of several holidays during which I could completely enjoy the excitement of a young child waiting for Santa and opening presents like there would be no tomorrow. The fact that my youngest daughter was born when I was close to 60 years old brought about a new appreciation of life that I had forgotten, or maybe wasn’t even there three decades or so earlier. I love all three of my daughters, but nothing quite equals the joy, excitement, and innocence of a young child who is a large part of an older man’s heart.

While there are oodles of Polish Christmas traditions in my family (like setting an extra seat at the Christmas Eve dinner table for Jesus, or going to midnight Mass that starts at 10 p.m., or watching the kids sing “Happy Birthday” to Jesus as they surround an ice cream layer cake), the custom that remains dearest to my heart is the sharing of oplatki.

Oplatki (“oh pwah key”) are Christmas wafers that are shared among the family just before the holiday meal is served. These unleavened wafers are rectangular shaped and very thin … they remind me of the consistency of the round wafers that become the host during a Catholic Mass.

A wafer is distributed to everyone present. The host or eldest member of the family gives a short prayer or greeting to the group, breaks off a piece of his/her wafer, and shares it with another family member. Then each person breaks off a piece of the others’ oplatki and continues until they have exchanged good wishes for a safe and healthy new year with everyone. As you can imagine, there are hugs and kisses on the cheek everywhere.

It’s like a networking mixer with your own family. No longer can quirky Uncle Waldo sit quietly alone in a dark corner by the tree. Young to old, old to young … everyone talks and laughs and enjoys each other. The best part is introducing any Christmas Eve dinner guests … or unsuspecting fiancées … to this Jatczak family tradition. If they can survive the oplatki exchange, they’re probably ready for czarnina! If you don’t know what that is, that’s okay … you’re invited to our house next year.

I can’t think of a better Christmas present than the year my brother returned from his deployment to the Middle East, right before Christmas. You can spend a lot of time in a year thinking about how precious life is, and how you might never see your brother again. When you come from a family of seven siblings who have found their way to all parts of the U.S. – from Anchorage to Las Vegas, Madison, Houston, and Kuwait – it’s a fair miracle when all siblings manage to show up in our hometown, New Orleans. And that year, we all found our way home to celebrate one of the most precious gifts in life we have … each other.

There were a few annual sacred rituals in my family. Watching A Miracle on 34th Street after Thanksgiving each year was high on that list. Growing up in an Indiana mill town didn’t offer many opportunities to explore the world beyond what the television brought into our living rooms, but that didn’t stop us from daydreaming and fantasizing about the grand lives being lived in places like New York and London, or even in Kansas if we were collecting again to watch The Wizard of Oz.

A Miracle on 34th Street was my grandmother’s favorite. Throughout the entire year I would listen to her recite Kris Kringle’s lines and talk about the glamour of Macy’s in New York. I was too young to even know where New York was, let alone that Macy’s was a real store.

Then, the year I turned 18 I moved to New York to begin working for Entertainment Weekly. As a small-town boy from the Midwest, the city was wondrous. It was full of life and curiosity. I spent days exploring its streets on foot with my headphones and portable CD player. And when my first holiday season in New York arrived, I was mesmerized by the department store windows. Saks Fifth Avenue, Lord & Taylor, Bloomingdale’s, and of course Macy’s on 34th Street. I wandered in and found Macy’s Christmas tree and was even able to take an ornament from the tree. I gave that to my grandmother for Christmas that year and it instantly became a coveted addition to her tree each year. Over her entire life, I think that simple little gift may have been the best gift I ever gave her for Christmas.