Milwaukee Bucks seeking a taxpayer handout for a new arena?

I’m not sure how I feel about this:

There hasn’t yet been a study released of how much a new arena would cost. But, based on other arenas built in recent years for pro basketball and hockey teams, the rough range could be between $350 million and $500 million, said Marc Marotta, Bradley Center board chairman.

Along with money from Kohl and other private sources, a new arena would need public funding, Marotta said. Timothy Sheehy, president of the Metropolitan Milwaukee Association of Commerce, a year ago suggested extending the Miller Park sales tax to cover those costs, which drew opposition from Abele and Gov. Scott Walker.

The 0.1% tax, which applies to sales in Milwaukee County and the four counties that border it, began in 1996 and is set to expire between 2016 and 2020 once the Miller Park debt is retired. Extending the tax to cover a new arena would require a change in state law.

While I support keeping the Bucks in Milwaukee, I don’t know that I could support the allocation of what’s likely to be hundreds of millions of taxpayer dollars to prop up the team’s efforts to build a new arena so the team can maximize its profits. What’s more, there are some who believe the economic impact new stadiums/arenas can have on their communities is overstated.

While a new arena may very well help the Milwaukee Bucks maximize their revenue streams, it seems pretty clear to me that a shiny new arena with the same old losing team won’t draw many fans. Fans pay to go see a winning team play, and if the Bucks can’t improve their on-court product, a half-empty new arena won’t do much good.

So apparently this image was enough to send some conservatives into a tizzy, threatening to stop eating Oreos and boycotting Kraft Foods, the makers of Oreos. 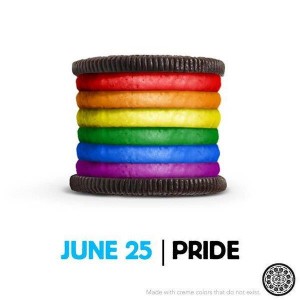 The image was released via the official Facebook fan page for Oreo cookies along with the words “Proudly support love!” in recognition of Pride Month – a time to celebrate diversity and call for equal rights regardless of sexuality. As is the case with Kraft Foods (makers of Oreo cookies), some corporations use the occasion to pledge their support to the LGBT community, whether through promotional offers, organizing employee events and volunteer opportunities, or taking out advertisements.