Milverstedt and the craft of freedom, guns, and motorcycles (Plus: Hell breaks out in Meadowood) 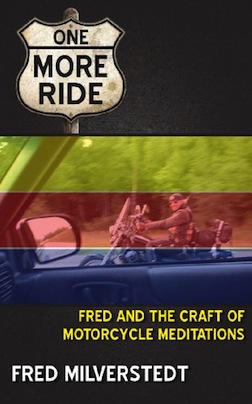 Fred Milverstedt says we met back in 1978 when he was flacking for self-made (and later, unmade) millionaire David Carley, who was running in the Democratic primary for governor at the time. The political gig was a brief stop on the Milverstedt life tour — one of his many gigs, some of them actually successful.

FritzderKat is one of those legendary Madison figures. To achieve legendary status requires an absence from the main stage, and for the past dozen years Fred has resided in a suburb of Minneapolis. A woman, of course. But legend also requires accomplishment — accomplishment achieved in spectacular (or at least notorious) fashion. Think Jimmy Cagney going out in style atop the exploding fuel storage tank in White Heat yelling, “Top of the world.”

Our second in-person meet-up was Friday last at One Barrel Brewing at Madison’s Schenk’s Corners for the release of his book One More Ride. Subtitle: “Fred and the Craft of Motorcycle Meditations.”

“I wrote it a year ago, took until late summer to iron out editing, which btw is done by Marc Eisen, and since then it’s been knocked around between production and the publisher’s other projects,” Fred told me. “It came out of a ride I took to Boulder, a story I wrote and sent around to some friends. One of them was Marc, who turned it over to Kevin Reichard [of] August Publications, and he asked if I’d like to do a book.

“In a way it is the wit and wisdom of an old biker, which is one of the reasons it’s only 173 pages.”

The author asked if I remembered our initial encounter 35 years ago. I do not, but entire years have slipped down the memory hole, in my case. History shows that Carley lost to Marty Schreiber, who in turn succumbed to Republican Lee Sherman Dreyfus for the top prize.

Two years earlier, Fred had co-founded Isthmus, now observing its 37th year. Fred was the talent; Vince O’Hern, still at the helm as publisher, was the bean counter. Before that, Milverstedt wrote about sports for The Capital Times, but “sports” more in the sense of characters out of Guys and Dolls. “To the Death,” the Isthmus motto, is the essence of Milverstedt. Flick the red cape at the old Grim Reaper, then pirouette out of his way and laugh at surviving the near miss.

We have corresponded for the past couple years via the wonder of that newfangled invention called “electronic mail.” Somehow, Fred took a likin’ to my online ravings. The two of us share an aversion to large crowds and submersion into the anonymity of the masses.

Despite the résumé, Fred declaims ever having been a leftie. That alone qualifies Milverstedt as a countercultural figure. For here is today’s money shot: Countercultural in these times means conservative … or, in Fred's case, more toward the libertarian "leave me (the Anglo-Saxon epithet) alone" side of things. Fred is off the central planner’s grid; the antipode of the collective, an unroped stray escaped from the herd. Milverstedt is a freelance freedom fighter battling the steady encroachment of Bloomberg’s nanny state.

From this remove, the man’s two major vices are power and speed. He expresses those vices through the language of two powerful machines: semi-automatic firearms and overpowered motorcycles. Who else would email JPEGs of his tight target grouping? Or extol the virtues of his AR-15?! That, my friends, is the difference between liberals and us conservatives and libertarians. We brag on our vices; the progs apologize for theirs, then legislate reparations.

The second and more powerful of his bikes is the Honda Valkyrie Interstate Tourer, which he has named “Brunhilde.” On that ride to Boulder, Fred writes of opening up the dangerously overpowered beast (bigger than a Harley full dresser) at times up to 115 mph on the up-and-down straightaways through the big-sky emptiness of western Nebraska, off the interstate and well off Smokey’s radar.

At Kearney … I dropped down south 20 miles to U.S. 34, which runs east-west just above the Kansas border. Ah, how refreshing. Two lanes, old but well paved, this baby runs straight as an Arapaho arrow from Holdrege, Nebraska, to Fort Morgan, Colorado, some 300 miles up and down roller-coaster hills, surprisingly mindful of the southern sector of Wisconsin’s Driftless Area, and virtually, or practically so, without much human intervention.

… I tell you, there’s nothing quite like a 1520 cc, 94-hp, six-cylinder engine banging along for miles at a time at 4000 rpm and 80 miles per hour. Music to me ears, food for the soul of a biker, even though I was wearing my helmet, which muffled a tad the Cobra Six-Pack exhausts.

He’s got me looking at getting me a two-wheeler again! Published by August Publications, One More Ride is available in print and digitally through Barnes & Noble, Amazon, and Apple E-Books.

A mob scene: 75 people armed and fighting in the streets

All hell broke loose in the dystopia of the Hammersley Road area of Meadowood Friday evening in southwest Madison. By the numbers: 75 combatants, 24 cops, three ambulances, two arrests, and more are imminent. Some neighborhoods have block parties. This one has block fights.

After the initial news media account was published on Saturday, many bien pensant voices in our southwest-side neighborhoods denied that the all-out brawl could possibly have involved 75 people fighting. Surely, the greater part of the mob consisted of innocent spectators. It’s part of a long history of good liberals denying the scope of the problem in these parts, lest they think themselves crazy-ass cracker racist. (Or is it crazy ass-cracker racist?)

This is straight from the police report released just this morning:

Madison Police responded to a violent outbreak in the area of Theresa Terrace and Bettys Lane on 6/28/2013, at approximately 730 pm. An officer in the neighborhood was flagged down by a citizen who described a huge fight that was going on just a block away. The officer arrived on scene, and stated that dozens of people were fighting in the middle of the street with a variety of weapons from garden rakes to dumbbells. People were reportedly using locks in their hands as brass knuckles, and brandishing sticks.

There were at least 3 victims that received significant lacerations and broken teeth during the melee, and this fight involved as many as 75 people at one point. Two suspects were arrested for their involvement in this ordeal, but The Madison Police Department continues to investigate this matter to determine the precipitating cause. Additional arrests in this scenario are likely, as this particular call involved 24 officers and 3 ambulances from The Madison Fire Department. Additional patrol officers were also brought into the area to keep additional fights from erupting throughout the night.

Where is the mayor?

Wonder Bar to be saved, for now

Conveyor belt sushi restaurant to open on west side

Concerts on the Square tickets reduced to $5