Mark your ballots and mark my words!

Watching President Obama preaching to the choir Monday morning, I was struck by how listless was the audience and wan the speaker. True, CNN’s webcast did not do much panning of the crowd. But the handpicked supporters providing the backdrop between the president and the City-County Building were almost inert.

Nor was Obama’s crowd that impressive; the Wisconsin State Journal claims 20,000. That’s at the high end. That many folks PAY to hear his warm-up act, Bruce Springsteen. Compare that to the 30,000 he drew a month earlier on the UW-Madison campus or the 80,000 John Kerry drew with Springsteen in 2004.

I was further struck by the president’s admonition against “romanticizing the last election.” Obama had an advantage four years ago. He could sell vaporware (“Hope and Change”) because he could run against the unpopular term of George W. Bush, even though W. wasn’t on the ballot. With a failed record, he must demonize Mitt Romney just as Tammy Baldwin must demonize Tommy Thompson: both Republicans stand accused of achieving financial success. 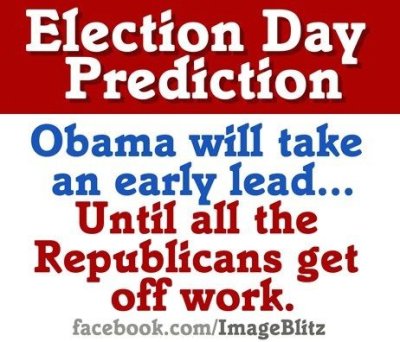 Ann of Althouse reports hand-made signs in Monday’s audience chastising Obama for his no-show during the Siege of the Capitol a year ago. Remember that Wisconsin was fly-over country for Air Force One during the Scott Walker recall election.

There is no denying the Republicans have the passion now, the enthusiasm. The Democrats do not. Independents are breaking for Romney.

And there is Obama, out there seeming tired and wan, showing up through sheer self discipline. … Of all people, Obama would know if he is in trouble. He would know if he’s losing now, and it would explain his joylessness on the stump. He is out there doing what he has to to fight the fight. But he’s still trying to fire up the base.”

Thanks to RealClearPolitics, you can create your own electoral map. 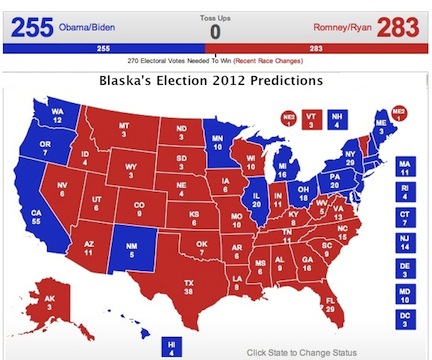 The president shed a tear at his final campaign rally in Iowa, Politico reports.

I have no problem with men crying. I do that myself at five different scenes in the movie Best Years of Our Lives.

But I do not recall hearing that Ronald Reagan, either Bush, or Bill Clinton teared up at their final campaign events – all of which would have occurred in their campaigns for a second term. As Peggy Noonan writes, I think he knows something. I do recall a photo of Jimmy Carter descending the steps from Air Force One during the final days of his re-election campaign, very downcast. Later it was revealed that he had just been told the jig was up.

Several weeks ago, I predicted that 2012 would play out like 1980, minus the earlier date’s landslide. The incumbent had a huge lead into October, but it dissipated as voters approached the polling booth.

Make your predictions. Sign in to comment below; it’s easy! On Wednesday, we’ll note who came the closest to being correct. (If the results are known, that is.)