The City of Monona has announced a major economic development initiative along the Yahara River waterfront that will transform 7.4 acres into a mixed-use development that may include housing, dining, shopping, and public access to the water and could increase the city’s tax base significantly.

After a year of meetings, Mayor Bob Miller said the city now either owns or controls 7.4 acres of property that includes the Chase Bank building, a long-vacant Ruby’s restaurant site, a former EDS office building, Inland Boat Works, and the Bridge Lounge. The city has spent about $2 million thus far on the project and has purchased Ruby’s and the Chase Bank building. It has two-year options to either develop or purchase the other three properties.

The proposed project site does not include the private Four Lakes Yacht Club along the river, although Miller said the yacht club supports the development.

For a landlocked community of just 7,500, this waterfront development opportunity is significant. “Right now, only five slips are public, and there are no pedestrian areas to get to the river,” Miller said. “[For Monona], this could be the equivalent of doing a Monona Terrace, Edgewater, or Judge Doyle Square. This is rare.”

Together with Monona’s community development authority and City Council, Miller has been meeting with property owners for more than a year and working with Vandewalle Associates and Madison Gas & Electric. Press releases are being sent nationwide, and the city will begin the process by issuing RFQs (requests for qualifications).

“We want someone to come in and develop or take over all of those parcels and create public and commercial space,” Miller said. “What’s currently appraised on the city’s books at about $7 million could increase tenfold, to $75 million-plus,” he said. According to a release, equalized value of the entire community could increase by 7% because of the project.

Monona also involved the Wisconsin Department of Natural Resources and the Department of Transportation from the beginning. Besides maximizing public access, the DNR can work with the city to remediate brownfield sites and increase green space.

“Nothing is approved. Nothing is carved in stone,” Miller cautioned, “but I can’t say enough about their willingness and support for the project. They’re open to doing some major improvements along the Yahara River, which is good for the public as a whole.”

In a release, DNR Regional Director Mark Aquino said, “By being brought in early we can help the city avoid delays due to any permitting or other resource concerns, and [we] congratulate the city for its vision in the project.”

Miller, a Monona native, said he’s driven past the site for years and recognized its deterioration. Citizens were complaining as well. Some properties had been offered for sale while others were burdened with financial difficulties.

“When EDS closed and the building started to look tired, it bothered me,” Miller said. “There is not one inch of anything natural or green or permeable in that triangle of land, only acres of asphalt and buildings.

“I believe, cautiously, that the economy is strengthening. Soon, someone would start to piecemeal these properties, which I didn’t think was the best use. I don’t like government competing with the private sector, but at times I think they can play a role. We’d love to have local participation, but at the end of the day, we will look for the best plan and option.”

Options could include retail, restaurants, perhaps a major hotel, and some residential. “I don’t know what it will be. We’re anxious to hear from [developers] what their vision is. It’s a potential clean [slate] for a developer to get to a location that no one ever thought would be available for the scale and the waterfront. This is a once-in-a-lifetime opportunity to create something great.”

The proposed development, he stressed, will improve the quality of life for the citizens of Monona and Dane County, “and nothing will happen without public input. This will become a redevelopment district where nothing can be changed without going through the city, and we have a track record of speeding processes along.”

The process remained under the radar because the city negotiated through third-party LLCs. “We played fair,” he said. “No one was taking advantage. We’re not overpaying, we’re not underpaying. I’m committing public dollars, and I’m very conservative. I didn’t make any of these decisions lightly. Everything was very deliberate.”

While he admits the project remains complicated and some negotiations remain, Miller hopes to be breaking ground in two years. “I’m a Nike guy,” he said. “‘Just do it.’”

“We have one of the greatest locations on earth,” he added, “and this site is closer to downtown Madison than 95% of Madison is! I’m thrilled.” 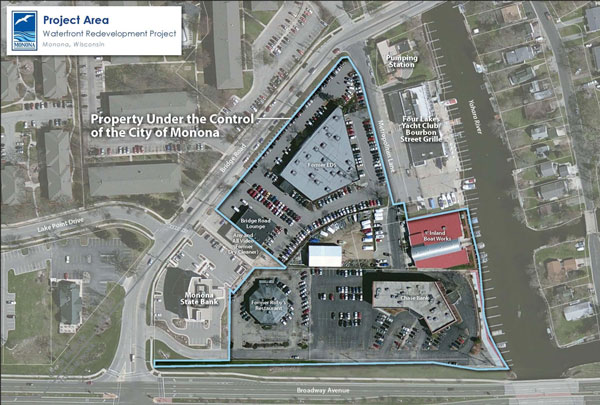