Jobs, jobs, jobs. That has been the mantra of every politician of every political persuasion ever since the Great Recession began. The jobs Holy Grail has led both office-seekers and interest groups to try to quantify exactly how many jobs will be directly created if a certain industry receives funding or a policy initiative is adopted.

The thing is this argument is not moving the needle. Why, you may ask.

Because the argument is ass-backwards, pardon my French. We keep harping about how many jobs can be directly created today and then, almost as an afterthought, throw in what these transportation improvements can mean for a given community or the country.

Presenting the argument this way has raised the following questions: a) Are these jobs permanent or temporary? b) How much money are we paying to “create” these jobs when you break down the dollars per job created? c) Couldn’t we also employ a lot of people if we hired them to construct a life-sized replica of the Great Wall of China out of Legos? I mean, think of the time and effort.

If you listen to talk radio or read the comments section below online news stories that cover transportation spending, you’ll see that these very arguments are routinely made to even more ridiculous lengths.

The point that far too often gets buried is what smart transportation investment can mean for a community. It can be transformational – regardless of how many people are employed to make it happen.

I believe we are about to witness a very specific example of just such a project in Milwaukee.

If you didn’t catch the announcement in March about the Lakefront Gateway project, it would be well worth your time to go back and read about it. Gov. Walker, Mayor Barrett, and Milwaukee County Executive Chris Abele (now there’s a threesome you won’t see on the first tee together; I wonder who their fourth could be) came together to announce a city-state plan for $34 million in roadwork that has the potential to unleash a series of initiatives that could transform the lakefront area in Milwaukee. In fact, Michael Cudahy very succinctly stated at the announcement at Discovery World, “This is going to change Milwaukee.”

The state funds are coming as part of funding for the Hoan Bridge project but will include extending Lincoln Memorial Drive south into the Historic Third Ward and moving several ramps on I-794 that will free up some tremendous real estate for development.

These state funds for the above-mentioned improvements are by no means the entirety of the investment that is going to take place – far from it – but they have now paved the way, so to speak, for the rest to occur.

The city of Milwaukee will put in about $18 million on new roads and walkways, which will include a new road to the Summerfest grounds and another connection between downtown and the Third Ward. Also planned is a pedestrian bridge that will cross Michigan Street and link O’Donnell Park to a new 44-story apartment and hotel high-rise. Another elevated walkway will connect people from this new high-rise to Discovery World.

Marcus Investments has big plans for the 15 acres of vacant land and parking lots, which are now able to be developed. The project looks to include stores, restaurants, hotels, and housing. “It would fill the gap between the neighborhood and Summerfest, add to the tax base, and provide an exciting new addition to Milwaukee’s downtown and Third Ward living, shopping and dining experience,” according to David Spano, who is president of the Italian Community Center, which currently rests on this land and would be redeveloped under the proposal.

Then there is Northwestern Mutual. Because of this development, it looks like a deal between Northwest and the city for some TIF financing to build its new downtown office center can become a reality as well. The TIF district still needs Common Council approval, but if everything proceeds, the skyline for Milwaukee will look much different. At 550 feet tall, it will be the second-tallest building in the state (the tallest is the U.S. Bank Center) and the largest overall building (1,114,000 square feet) under one roof.

Here is a rendering of the proposed development: 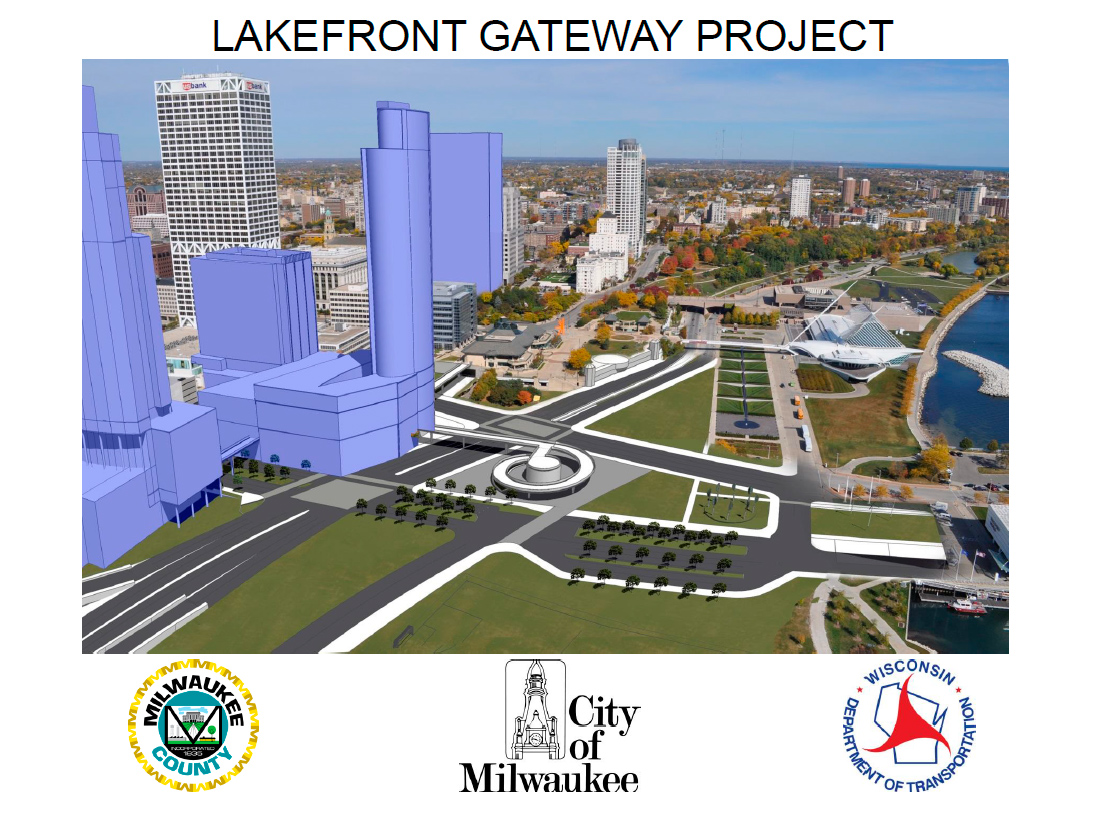 If you want to talk jobs, the number of people in the construction industry alone who will be employed by the private sector to build all these hotels, restaurants, stores, and office buildings will certainly eclipse the number working on the road projects themselves. Beyond that, of course, is the real payoff. The number of people gainfully employed with all these new endeavors, the overall economic activity generated, and the improved stature of Milwaukee as a whole represent the real Holy Grail.

While this project may be dramatic, it is not an anomaly. There are communities across Wisconsin that have seen the transformational effects of various transportation projects over the decades.

So let’s acknowledge that while it is a tremendous benefit that skilled people are put to work when we undertake restoring or reconstituting our transportation system, it is a side benefit, not the purpose of the investment. The real purpose, of course, is what the investment does for the community.

Maybe, if the economy continues to improve and unemployment numbers fall, we will once again talk about these investments based on their long-term impacts rather than simply trying to sell them based on how many direct jobs are “created” today.