Latest hiring trend might be making recruitment even harder

One-third of companies ‘breadcrumb’ job applicants in the hope that better candidates will come along, but it’s leaving a bad taste in candidates’ mouths.

Competing for a job in today’s market is challenging enough, and new research from global staffing firm Robert Half shows there’s another hurdle for candidates to overcome: being “breadcrumbed” — or strung along — by employers.

While the concept originates with Hansel and Gretel, breadcrumbing may sound familiar to anyone who’s used a dating app, as in that context the term is often defined as leading someone on romantically using online or electronic forums (think: social media or texting) to keep someone’s interest in you, even if you never intend to become romantically involved with them.

Like ghosting before it, the trend has made its way from the dating world to the hiring process, as anyone who has applied for a new job in the past year can probably attest.

One-third (33%) of senior managers surveyed said their company is taking more time to hire in the current environment in hope that better candidates will come along despite having access to a deeper talent pool. When asked to reveal how they keep candidates engaged during the hiring process, common responses included scheduling multiple rounds of interviews, conducting skills testing, and keeping applicants busy with online training.

Where candidates are most likely to be strung along
According to the research, which looked at 28 U.S. cities, breadcrumbing behaviors may vary by region.

“By stretching out the hiring process, companies waste critical time and resources and may lose out on the best talent,” says Paul McDonald, senior executive director at Robert Half. “Employers who are transparent with candidates and move efficiently through the process will create a positive experience for potential hires and gain a recruiting edge.”

According to B. Lynn Ware, an industrial/organizational psychologist, “Breadcrumbing is really a modern term for what we used to call intermittent reinforcement, which is one of the strongest ways to develop someone’s behavior.” However, while good managers may use behavioral reinforcement to develop their team members through rewards and recognition, breadcrumbing is actually playing on the emotions of job seekers desperately trying to find an opportunity in a crowded job market. If hiring managers were looking for a way to combat being ghosted by candidates, this isn’t the way to do it.

The signs you’re being breadcrumbed by a potential employer aren’t hard to spot. According to career website FairyGodBoss.com, they include:

Notes a Forbes report, breadcrumbing “also occurs when your manager leads you to believe that you’ll get that raise, promotion, bonus, internal transfer, higher corporate title, or switched from the cubicle farm into an office, but there is always a reason why it can’t happen now.”

There are a number of reasons why hiring managers may be extending the interview and hiring process, not all of them nefarious on the surface. Hiring managers might actually like a candidate, but not be sure where they’d be a good fit within the company at this point. The hiring manager may also be waiting to see if another position will come open that the candidate could fill. But in both of those cases, a little honesty would better serve everyone involved. What’s worse is if the hiring manager is stringing candidates along while they wait to see if someone better applies. There is no perfect candidate, and lots of good ones could walk if they’re made to wait indefinitely. 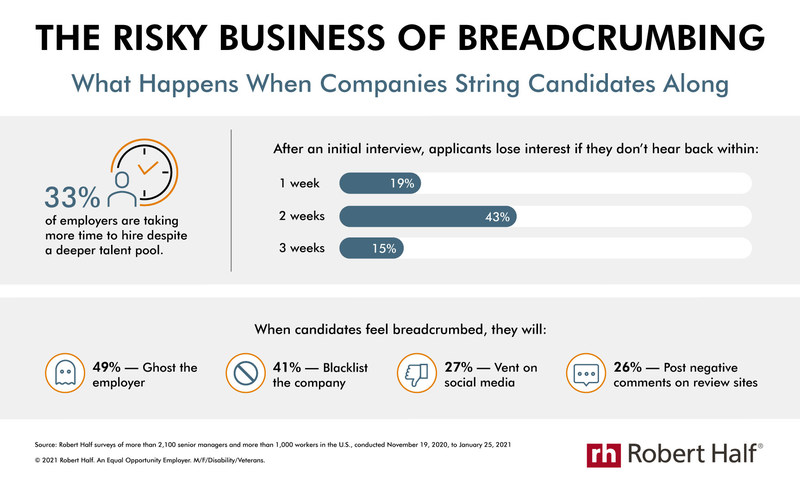 Candidates won’t wait long
In a separate survey, 62% of professionals said they lose interest in a job if they don’t hear back from the employer within two weeks — or 10 business days — after the initial interview. That number jumps to 77% if there is no status update within three weeks.

Workers also revealed what they would do if they felt they were being breadcrumbed by hiring managers:

McDonald notes, “Employers who don’t treat candidates with the same level of courtesy they expect may face consequences, including burned bridges with potential hires and a tarnished reputation, both of which can negatively impact future recruiting efforts and business growth.”