Today is the day after the Great Day After. When do the round-ups begin?

There’s no way to spin Tuesday’s Wisconsin recall election in the liberals’ favor, although Comrade John is trying his best.

Mr. Ed on his MSNBC comedy-variety hour said Wednesday night, “You can’t buy enough lipstick to put on this political pig. It was a rough night.”

UW-Milwaukee prof Mordecai Lee, a former Dem legislator, called the recall “a blunder of epic proportions,” according to The Wall Street Journal.

Matthew Rothschild opines on the Isthmus Daily Page: “Spare me the spin. This was a whupping.” (The Progressive editor laments that Progs relied on the ballot box instead of massive civil unrest. Hear that, Old Bob?) 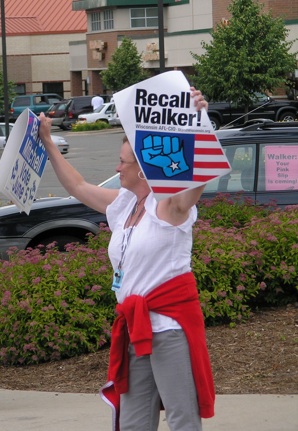 Expect Tom Barrett to hold a press conference, a la Richard Nixon when he lost the 1962 election for governor, to announce: “You won’t have Tom Barrett to slap around anymore.”

Poor Tom. He can’t go to the State Fair without getting beaten. Now he gets whacked at his own party. (He’ll cry if he wants to.) Tough crowd, those Democrats. WISN-TV has the video. (Thank you, ma’am; may I have another?)

Then there’s the fellow who jumped in front of a WISC TV-3 camera at the Capitol Tuesday night to reveal his T-shirt, which read “F (bomb) Walker.” Was that you, Graeme Zielinski?

But no one can top “Crying Man” to best exemplify the unhinged quality of this insane recall catastrophe. CNN television encountered Crying Man in front of the Capitol Tuesday night. Crying Man was spraying saltwater because conservatives were more willing to part with their hard-earned money to retain the governor they had elected just 18 months earlier than were Democrats to defeat him. (Barack Obama tweets his solidarity.)

Cried the Crier: "Every single one of you out there in the nation, if you're watching, democracy died tonight. … The end of the USA as we know it just happened. We just got outspent …."

Crying Man is sure to become a cast member in a new cable TV unreality show along with Segway Boy and Pink Dress Guy. But really, he was doing nothing more than recycling John Nichols in calling for government to limit free speech.

Sure enough, Crying Man called Miss Vicki’s show while Schimming and I were on the air Wednesday (The Great Day After) and seemed on the verge of bawling again. Thinking he was still on the air, according to Brent, the WIBA program producer, Crying Man vowed that he would become “our worst F (bomb)-ing nightmare.”

They’re out there, friends. And they are plotting. Roll ‘em, Lester:

Have Democrats learned anything from the smacking down they got from Scott Walker Tuesday? I’m not seeing any evidence of it.

When they’re not reciting their losing campaign talking points, they’re blaming the 2010 U.S. Supreme Court case Citizens United and the supposedly baleful effects of money on us gullible voters, stupidly clinging to our guns and our religion. (Mr. Ed actually used that Obama locution last night.)

Charles Lane at WaPo: “Of all the excuses being offered today, this is the most pathetic. Of course Walker exploited existing state campaign-finance law to raise as much money as possible wherever he could. … If they didn’t want Walker to bring a financial gun to their knife fight, they shouldn’t have started it in the first place.” (Democracy wins in Wisconsin.)

The delightful James Taranto writes: “It's telling that the Left is convinced it can't win elections without censorship.”

Maybe not censorship, but the Democrats could have used a little healthy respect for differing opinions. Charles Lane at the online Washington Post asks:

“Now that Scott Walker has decisively won Wisconsin’s recall election, I wonder if we’ll be hearing any expressions of remorse for the smears, false rumors and general vilification that his opponents have hurled at him over the last year and a half. … This rhetoric wasn’t just hyperbolic. It was strategically suicidal.”

“Democrats will talk about the influence of money and, if they are honest, admit they were wrong to allow the anger of their union allies to drive them off the cliff as even moderates came to view the recall as an example of political misbehavior.

“After [Walker’s] recall victory, never again will union thugs storm a state capitol, as happened last year in Madison, secure in the belief that they had the muscle to intimidate a governor and a legislature with a fresh mandate for change from the people.”

What have I been saying, lo these many months?

Quotes from the Great Day After

Bronze – Mr. Ed on the NBC exit poll showing 38% of union households voted for Walker. “I don’t understand it; I don’t get it.” Finally, some truth from the Ed-man. (The New York Times has the numbers.)

Silver – State Sen. Mark Miller, D-Monona, on the apparent victory of the Democratic candidate in the Racine Senate district recall election: “I hope the Republicans will respect the results of the election.”

Like Sen. Miller and his fleeing 14 respected the results of the November 2010 election? Like Democrats respected the election that returned Justice Prosser to the state’s high court?

Gold – Piers Morgan on CNN slapping down (figuratively) DNC chairman Debbie Wasserman Schultz: “If you keep calling [Walker] an extremist but you accept that he won, what does that say about the people in Wisconsin? Are they all just a bunch of mad extremists?”

Piers, can we get back to you on that?

An apology, Senator! Will Fighting Ed Garvey apologize for disparaging the ethics of Marquette University Law School and the UW-Madison professor, Charles Franklin, who runs their political public opinion poll (as he does here)? Because the Marquette poll was right on the money: Walker to win by 7.

Dems/labor made Walker a rock star – I do hope you saw Scott Walker’s gracious victory speech Tuesday night. When his partisans booed the mention of his opponent, the victor shushed them. The influential Joe Scarborough says, “Scott Walker just might be that rare type of leader who is able to move an electorate his way by being blessed with the perfect proportions of courage and humility. … His party and country may need him as part of a national ticket in the coming years.”

Predictions? Just to complete the circle, way back in April I asked the wise and wonderful to predict what Wisconsin would wake up to on June 6. Space aliens, Dem spokesmouth Graeme Zielinski in a holding cell (a boy can dream, can’t he?), burning and looting are among the predictions. I followed up with my own predix here (scroll to bottom of page).

Who do you think came closest?

Discuss among yourselves: Have Democrats become the party of rum, Romanism, rebellion, and recall?