Is Paul Soglin that stupid? 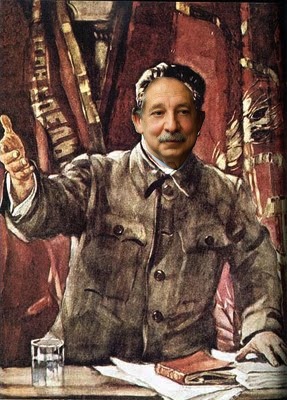 Or does he think we are? Hizzoner the mayor of this One Party City has plans to ferret out vendors who might not share his political world view – but don’t worry, he won’t reward friends and punish enemies.

Mayor Paul wants to assemble a database of would-be city government vendors. No, not their services, prices, and contacts – their political proclivities.

“I think it would be a good idea to know if the bidders are contributing to political efforts which go into organizations that may be lobbying for certain kinds of outcomes or working against the interests of the city,” Havana Paul told Patricia Schneider at TCT.

“If they’re supplying the city while they’re behaving like the Koch brothers, it would be good for the public to know it.”

For the record (cue Nixon speaking into the hidden microphone: “but it would be illegal”), Soglin says the city would continue to award bids to the “competent” low bidder. (Wink and a nod.)

Except that city government has proven it is quite willing to practice viewpoint discrimination. In January, a Madison committee turned down an affordable housing grant request from a pro-life organization. It did so despite city attorney Michael May’s admonition that “federal regulations provide that religious or faith-based organizations are eligible to receive [these] funds like any other entity and bar the city from discriminating against such organizations. I must state it is difficult to determine the basis on which the CDBG committee determined not to support the application.” (Attorney May’s Jan. 28 letter.)

Leading the forces to turn down Care Net’s application was Ald. Lisa Subeck, former head of the pro-abortion NARAL.

Soglin actually brags about the chilling effect on constitutionally protected free speech of his latest thought-control measure. Schneider reports that Soglin “is wondering if companies supporting Republican causes would rather lobby against the city or do business with it. He’s betting that exposing such activities might prompt some companies to curtail them.”

Trailblazing Middleton attorney Jim Troupis tells me, “It is McCarthyism by another name. It intimidates, but it does not say it is illegal to give – only we all know the purpose.” Yes, Mr. T., it’s called prior restraint. It poses an impermissible viewpoint test.

Paul practiced economic blackmail for a living before being elected mayor this last time. He was bankrolled by Judy Faulkner, billionaire Epic owner, to attack WMC member companies. The difference here, of course, is that he is using city government’s infrastructure and considerable coercive powers to wage his vendetta.

If Scott Walker or Mike Huebsch had proposed anything like this, Mike McCabe and John Nichols would have gone Graeme Zielinski berserk. But since it’s liberal-on-conservative crime, move along, folks, nothing to see here. I do credit the Divine Miss Vicki and Chris Rickert for quickly picking up on this (if only he wouldn’t slip his punches).

“Before calling 911, check to see if person lying on the grass is dead.” (Online headline at Madison.com.) If they’re not, call Madame Brenda.

Abortionist Kermit Gosnell to a patient crying for him to stop the procedure: “Stop being a baby.” As James Taranto elucidated, “You know what we do to babies around here.”

All hail Charles Ramsey, who freed the three abducted girls in Cleveland. “Bro, I knew something was wrong when a pretty little white girl ran into a black man’s arms. Something is wrong here. Dead giveaway!” (Watch the video.) Now he’s saying give the abductees the reward money; he already gets a paycheck. Stand-up guy!