I’m in the autumn of the year

It’s all too beautiful, the Small Faces sang back in the day. They must have been singing about this first week of October. I will, therefore, suspend my usual rant and try to summon up my long-lost flower child, sans tie-dyed T-shirt.

The lab coats at the Blaska Policy Research Foundry and Experimental Work Farm have declared the Madison, Wis., area to be at peak color. The Lovely Lisa and I were admiring the merlot and orange hues blazing from the purple ash tree out in the park behind us late Monday afternoon, glass of sauvignon blanc in hand, when – up in the sky! It’s a bird! It’s a plane! It’s a big bag of gas! Yes, it was the MetLife blimp, improbably hovering over Fitchburg. It was heading north right toward us when it did a low-level U-turn and headed back to whence it came.

Anyone know why? My theory: it’s looking for the Badgers’ lost ground game. 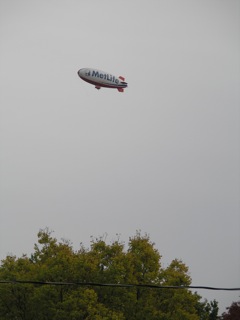 As for the ash trees. Don’t cut them down until they’re infected. Destroying them pre-emptively is like destroying the village to save it. I do understand firewalls; destroy those surrounding the diseased but not a clean stand.

On today’s agenda: split wood from the woodpile, home to an inexhaustible supply of chipmunks despite Young Bluster’s best predatory skills. The wood is what remains from the two overgrown silver maples we took down a good 10 years ago. Much of what remains is crumbling back into the earth. Will make fine bedding for shade-loving woodland plants, such as jack-in-the-pulpit and trillium.

Saw my first and only Brewers game at Miller Park Sunday. Yes, they lost to the lowly Astros and thus are eliminated from playoff contention. But our biggest disappointment was that the roof remained closed on a glorious Sunday afternoon. Temps were in the upper 60s under brilliant sunshine, which one had to pass through in order to enter Miller Park. Still a great place to see a game.

Passed by the new Bob Uecker statue on the west side of the stadium. In person, it does look like the legendary announcer. The photographs did not. But shouldn’t the statue have been holding a microphone? Our seats, in the loge section 218, were right under Uke’s broadcast booth and right behind home plate.

Number One Son and I were displayed on the Jumbotron. Surprisingly, my face was not buried in a beer cup. Only consumed two and they are on the small side compared to the old days. Still have a mustard-yellow T-shirt from old County Stadium bestowed upon me by a group of sots, whose only requirement was that I chug a bucket of suds. By bucket, I mean Kentucky Fried Chicken family size. Those were the days, my friend. 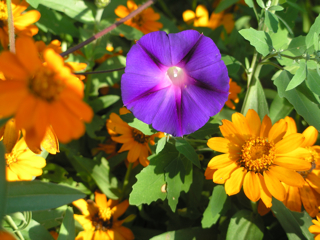 What a glorious drive between Milwaukee and Madison! Farmers are taking soybeans and field corn. Hope they get a crop. It has been a hot and dry growing season, but dry is what you want at harvest time. Back at the Experimental Farm, the viburnum bushes are heavy with red berries, leaves are turning. Morning glories still bloom above dwarf zinnias. The indentured servants have harvested the last of the pole green beans and peppers. Cherry tomatoes remain.

The construction guys putting up the ATC 345-kilovolt electric transmission line between Middleton and the Odana golf course have it good. I got to say, the tall towers don’t look bad at all. Need the juice, don’t we? The resources and ingenuity that go into sticking those towers into the ground are amazing. Still interested in how they’ll traverse the golf course. Got to be next year’s hole prize; first to hit the tower on the fly.

I do feel sorry for the office-bound today, sentenced to life in a cubicle and endless meetings in windowless rooms. Been there, done that. Like an old turtle, I need to sun myself. Speaking of which, there’s a huge African tortoise named Roxy that has the run of the store at PetWorld off Todd Drive. What a surprise to see her clanking down the aisle.

Speaking of Odana golf course, have I told you that my team won the Revenue Golf League championship? It was due to my grand total of one-half of a point for tying my opposing player. Ahem. 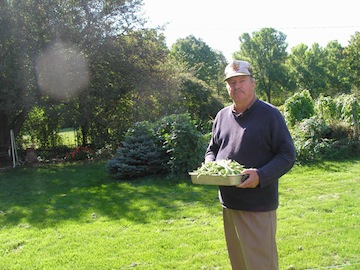 Got my Sun Prairie High School class reunion coming up this week out at The Oaks. Who are all those old people? I’m registered but still undecided about attending. High school, meh!

This is not yet Indian summer or, as it is now known, “First Peoples Summer.” That comes later this month after a cold period. October is what reminds even the healthiest of us here in the Great North to make every day count.

Yes, the sun is shining at The Stately Manor. The good folks at In Business have re-established the redirect link to this hallowed blog. If you haven’t already, bookmark me at www.ibwisconsin.com/blaska. Always plenty of parking!