Hot and bothered at 38° Celsius!

Well, when you put it that way, it doesn’t sound so bad.

I’ve given up on the lawn. Now I’m just trying to save the vegetables, the flowers, and the shrubbery. I am beat by the heat.

It is crazy hot and desperately dry. In the countryside, the corn is all pointy-leaved – its way of reducing exposure to the heat. Had there been a full inch of rain last weekend you could have watched the corn shoot up in real time. This drought will cost farmers in Wisconsin millions of dollars in lost income. I would take the BTUs in good humor if it came with a like quantity of H2O.

When my Grandma on the farm (born 1885) agreed with something, it was “as right as rain.”

Like most in my generation, the baby boomers, we grew up without air conditioning. Kids don’t notice the heat, it seems. Not until my late teens, in my case, baling pea vines in 100-degree F heat on a day like today, did I know hot. The bales were extra heavy, the chaff was scratchy. We dropped salt tablets like M&Ms and rehydrated straight from the hose.

Our Greatest Generation parents did not begrudge that their unpaid labor salved their thirst with amber waves of fermented grain, once the hay was in the mow (rhymes with wow). I grew up on nourishing Pabst Blue Ribbon. (“Heineken? F-bomb that s*** … stuff!” – Frank Booth.)

The post-World War II decade was the high-water period of the Wisconsin tavern, a mecca of cold beer, air conditioning, television, and conviviality. Father campaigned for political office at steamy church basement dinners on Sunday and the taverns in the afternoon.

It was a generation that, in the big cities, opened fire hydrants and slept on the fire escape and waded into the nearest body of water. Once polio was conquered, Sun Prairie built a municipal swimming pool, about the same time membership pools were being dug in Madison. Madison’s municipal pool was built 50 years later, thanks to the Goodman Brothers. 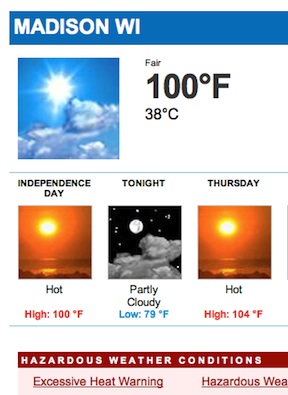 If you don’t have the National Weather Service website bookmarked, here ’tis.

Stately Blaska Manor, built in 1954 during an episode of the Adventures of Ozzie and Harriet, received air conditioning only upon our occupation (accomplished without the assistance of Mr. Z! Haukness) in 1991.

Let us pay homage to that great American patriot Mr. Willis Carrier, who did more for the Republican Party than Abe Lincoln or Alvan E. Bovay. Yes, Mr. Carrier invented air conditioning, thereby rendering places like Phoenix and Miami fit for human habitation year-round and, this summer, Madison, Wis. Amazing how something that started as a luxury becomes a necessity.

The Great Lawn at the Stately Manor is crunchy brown. This is the norm in places like California. (Norm!)

Precipitation was last recorded at the Blaska Experimental Work Farm on Monday, June 18.  Total: 0.2 inches. Officially, Madison received 0.31 inches of rain for the month of June; that’s 4.23 inches below normal. Temperatures were 4.6 degrees above normal, helped by nine days of 90 or more. 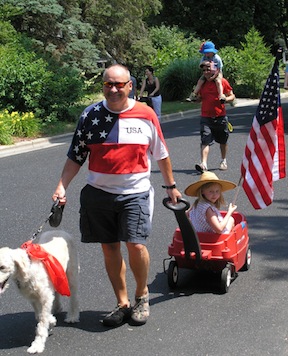 We applauded the parents and grandparents and the little children who paraded past the Stately Manor’s VIP reviewing stand in the annual Orchard Ridge neighborhood Independence Day parade, then quickly darted back inside. A city fire truck led the parade. I urged its crew to open the hydrants, to no avail. Wednesday’s record high of 102 will be surpassed by today’s forecast of 104 degrees F. Friday will mark the third straight day in triple digits. If the forecast holds, it will be the 10th day in a row that high temps exceeded 90 degrees.

Does this mean The Squire has converted to the Global Climate Change faith? If CO2

causes global warming, how to explain that CO2 emissions have declined to levels not seen since 1990?  (H/T to Miss Vicky.)

Temperatures during the 1930s, when the Greatest Generation was decidedly non-air conditioned, regularly hit the 90s F. The 1936 North American heat wave was the most severe in modern history, Wikipedia tells us. The death toll exceeded 5,000 people in the U.S. For our state, a record 141 people died in temperatures between 100 and 104 from July 12-15, 1995.

July 1936 is responsible for eight daily high temp records for Madison that still stand, including 107 on July 14 – the highest temperature ever recorded here. Will we break it today?

The 1930s, that’s when threshing crews operated coal-burning steam engines and hefted bags of oats or barley onto wagons on my grandparents’ farm. Back in the kitchen, the women cooked, sometimes over wood stoves, for crews of a dozen or more. Summer kitchens, detached from the house, made sense, but that pioneer innovation was pretty much extinct even by the 1930s.

The highest temperature ever recorded in Wisconsin was 114 degrees on July 13, 1936, at Wisconsin Dells. (NOAA has Wisconsin’s weather records.)

Make a peace offering to a liberal

Show him that you hold no grudges for wasting your time and insulting your intelligence. The gift that keeps on giving. No commemorative coin for you, Tom Barrett. (If there was, it would be a blank.) 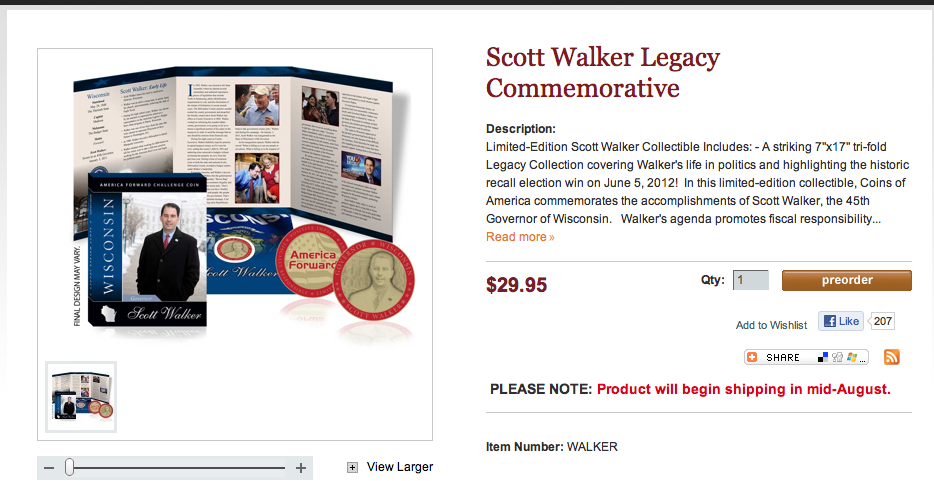 • RIP Sheriff Andy Taylor. When we were writing speeches for TGT in 1998, we stopped what we were doing at 11:30 a.m. to turn on the TV and watch the goings-on (in reruns) in Mayberry. Are any of today’s television programs half as good? (“Good” in all senses of the word.)

• My liberal on-air adversary on last Friday’s WPR Week in Review program, a “John Smart of Price County,” repeated the canard about Scott Walker being “out of step with Wisconsin values.” After winning two statewide elections inside of two years, WHO is out of step? Time to get new talking points, Mr. Liberal! (It’s podcast #120629C.)

• Blaska’s Bring It! is your complete online source of Higgs bosons, the Godly particle! Can you feel the power?