Here's to the leapers of faith: Entrepreneurship often requires the kind of courage that borders on foolishness 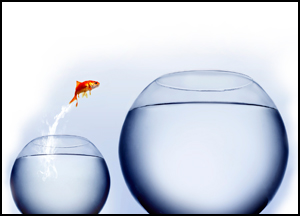 I remember the conversation vividly. I can only hope my wife’s recollection is a bit fuzzier.

One pleasant summer day a few years back, Cheryl (that would be my wife) and I were sitting in a local vegan-friendly restaurant on a pleasant summer day, and she wondered aloud whether a vegan-only food-and-drink festival could make a go of it in the Madison area.

I could see by the look on her face that an action plan was slowly forming, so Tom the Destroyer of Dreams was summoned forth from one of the many squalid and craven corners of my mind to slay that dragon while it was still a defenseless soft-shelled egg.

Now, we’re both vegans and animal lovers (I’m more likely to love them from afar, like you’d love a great-aunt you never plan on seeing again – but still, it counts), so the idea made a certain amount of sense. But before long, the litany of potential downsides suddenly came gushing from the fear-based centers of my brain.

Are there enough vegans, even in Madison, to make this fly? Would a vegetarian fest fare better? What if my relatives get wind of this and interrupt the featured speaker by noisily sucking the marrow out of yet another oven-baked goat femur? Do you really want a repeat of our wedding reception? Pfft. You must be out of your mind.

She agreed that maybe this was a pie-in-the-sky idea until about a year later, when another group of dreamers launched Mad City Vegan Fest – and far exceeded everyone’s expectations. We’ve attended every year since the fest premiered in 2011, and every year I’ve felt just a bit sheepish about my early skepticism. (This year, the festival takes place on June 8 at the Goodman Community Center, and I’ll be sure to attend – red-faced as always.)

The moral? Sometimes you’ve just got to dive in. Beginning a new enterprise – whether it’s a start-up business or a wacky scheme for a festival featuring food that most people are convinced they don’t like (usually because they haven’t tried it, of course) takes planning and hard work. But it also requires at least a little bit of faith.

A fun little game I like to play involves trying to imagine the worst business idea a human could possibly come up with – stuff that’s Kramer from Seinfeld-worthy. A hunting apparel store in San Francisco’s Castro District? An IHOP built into the lobby of the Louvre? A raw vegan catering business in Green Bay, Wis.?

Well, guess what. There’s a raw vegan catering business in Green Bay, Wis. It’s called Vita, it’s fantastic, and it was apparently started by someone who had neither seen nor heard of Green Bay before deciding to crash-land her rectangular spaceship full of raw vegan cheesecakes on the city’s near west side. While the city’s iconic burger joint, Kroll’s, remains as packed on a Saturday night as its patrons’ arteries, Vita remains relatively obscure. But it plugs along. Weird, huh?

Of course, despite my sometimes crippling circumspection, even I’ve managed to take a wild swing at life from time to time. Back in 2005, a friend and I decided to start writing a book, even though we had no clue how to do it – or how to get an agent or write a proposal. We just forged ahead, knowing full well that it might come to nothing. About a year later, the book was published by Nation Books, a small but respected publishing house. We didn’t get rich, but we did get published – and I wouldn’t trade the experience for anything.

So two clueless louts with half a plan managed to do something. Who knew? Still, I have to think there are more stories like that than anyone realizes.

Reality often intrudes on people’s dreams, but sometimes you simply have to let your dreams intrude on reality. Write a book. Start your own business. Launch a ridiculous vegan festival that turns out to be wildly successful.

In business as in life, it’s important to do your due diligence (solid business plans and all that), but at some point you’re going to face a leap of faith, and occasionally you just have to take it.

So here’s to the entrepreneurs. If I can offer you any small shred of advice, it’s this: Follow your dreams, but don’t be an idiot – and whatever you do, don’t tell me your business idea at 5 p.m. on a Saturday in July when I’m already well into a pint of porter.

Economic forecast: Recession all but certain in 2023

Taco restaurant to open on east side