Happy May Day, Occupiers. In Cuba!

Today, May 1, is the Left’s (clear throat) red-letter day. It’s May Day, “an international occasion to celebrate and defend the rights of the working class,” exults The Nation magazine.

“The working class!” Don’t ya just love that Lefty lingo! And what better captures the warp and woof of the 8-to-5 working stiff than the Occupy Movement!

“This year, with the Occupy movement taking full advantage of May Day’s historic significance, we’re likely to see the greatest explosion of outrage at the excesses of capital since the first mass May Day protest in the United States in 1886.”

(If you follow the link above to Occupy’s New York website, you will be exhorted to take to the streets! Skip work. Don’t shop. “The only solution is world revolution!” LOL!)

Let’s return to Rothberg in The Nation so that we may parse his choice of words. “Explosions?” “Outrage?” “Mass protest?” And what is the significance of his date in history, 1886? Could it be (cue the Church Lady as the devil) the HAYMARKET SQUARE RIOTS? Anarchists? Blood in the streets? Holy, Revolution, Batman! Does anything stir the socialist heart like a good, messy, blame-the-cops riot?

I didn’t see too much outrage as Occupy Madison broke camp this Tuesday noon at its squalid lot on East Washington Avenue. Madison Police Captain Carl Gloede kept watch on the proceedings and told your faithful blogger everything was peaceable. Nor did I see too many working class people, for that matter, until the city trash crews arrived.

If the streets of Madison had been taken to by anything other than authorized vehicular traffic, it was not obvious.

Presciently, The Nation’s calendar of Occupy events omitted Madison, Wis., which is usually Ground Zero for this kind of prog agitation. Because Madison’s new/old mayor – once known as Havana Paul and famously tear-gassed during the Vietnam protests on campus – has had enough. 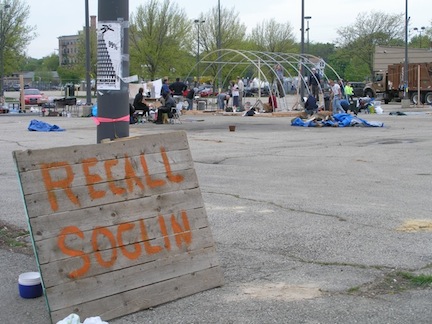 Paul Soglin is getting my strange new respect, which I’m sure will make his day.

Hizzoner, as quoted by the Wisconsin State Journal: "Unfortunately there was this myth that grew up over the last several months that this was some kind of society that was working. If this was an apartment building that was in any neighborhood in the city and this kind of criminal activity was going on – there would have been demand to deal with the landlord," Soglin said. "In this case the property owner is the city of Madison." 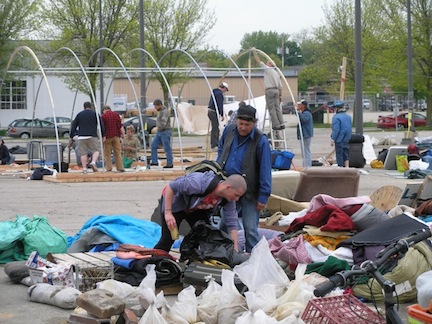 Of course, the Occupiers and friends did mount a small protest outside the mayor’s office Monday evening, in which only one person was arrested, a “retired history professor.” Ann of Althouse points out that the aptly named Allen Barkoff appears to be vice chairman of the regional Socialist Party.

Speaking of Ann of A, she gets off the Quote of the Week: “You know the old lefty slogan ‘Property is theft.’ These lefties have me thinking: Protest is theft.” 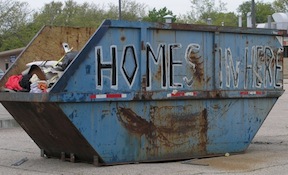 Or Anarchy 101. A great new video released on this glorious feast day of the socialized working man, by EAGnews.

I know, I know, our acquaintances on the Left will cry “McCarthyism” – the gift that keeps on giving. But just because old Tailgunner Joe couldn’t shoot straight doesn’t mean there were no squirrels in the woods.

The International Socialists were thick as thieves during the 2011 Siege of the Capitol; socialist provocateur John Nichols used their bullhorn. I was there.

The EAGnews video (it’s 16+ minutes) also indicts firebrand Ben Manski and his Liberty Tree Foundation for “plotting” against Scott Walker a good month before the governor was even sworn in. He’s shown chatting with his mentor, fellow Red-head John Nichols, during a protest, but you have to look quick.

“This was all about intimidation,” Brian Fraley of the MacIver Institute tells the camera.

Brett Hulsey is briefly depicted defending Sen. Glenn Grothman from attack (of which, the video provides no narrative). Che Guevera T-shirts, anarchist flags, and other socialist symbolism is seen.

Says the video’s producers, EAGnews.org: “The anti-Walker campaign has involved legislators fleeing the state, death threats, intimidation, destruction of property and utter contempt for any whiff of civility. … The ends justify the means.”

Do Kathleen Falk or Tom Barrett endorse or denounce this hooliganism?

• We learned from the New York Times Page One article Sunday that Koch Brothers-owned paper mills in Green Bay have better relations with organized labor than the Koch Brothers-hating Capital Times Co.

• The Oconomowoc School District is using Scott Walker’s Act 10 to think outside the box. In a nutshell, they want quality over quantity: fewer but better teachers. The upshot for the school district: cost savings. For the remaining teachers: better pay.

Intrade gives Scott Walker a 70.5% chance of winning the recall race; Barack Obama a 60% chance of being re-elected; the Supreme Court a 58.8% chance of overturning the ObamaCare individual mandate; and a 0.02% chance Blaska’s Bring It! wins the next Pulitzer Prize.