Deregulation. In 2013, the word itself elicits visceral reactions. The reactions tend to be felt through the prism of our ideological leanings. Those right of center feel all warm and cozy inside when they hear this word, as they picture commerce humming along unfettered while birds chirp and angels sing. Those left of center tend to feel their stomachs tighten as they envision robber barons left free to pillage and plunder.

In these days of hyperpolarization, we forget there was a time not that long ago when things weren’t quite so black and white. Take the Staggers Act of 1980. It was a law that largely deregulated a struggling railroad industry. Named after the late Democratic Congressman Harley Staggers, it was signed into law by … Ronald Reagan? No. Jimmy Carter.

Take a second and click on this link to see the YouTube video of President Carter’s remarks at the bill-signing ceremony.

During the ceremony, President Carter pointed out that the railroad deregulation act was the result of strong bipartisan support in both houses of Congress. He goes on to say, “This effort is crucial to promote more competition, to improve productivity, and to hold down inflation. … The importance of this act is clearly reflected in the outstanding and diverse group of people who are assembled here for this ceremony. Representatives from railroad management and labor, from such shippers as automobile and steel and coal, retail stores, farm organizations, and also environmental organizations.”

Ah, coalition-building — reaching across the aisle to pass major legislation. Who knew 1980 could feel so long ago? As my kids ask, “Is that when you had to talk on phones that were tied to the wall?”

So did this kumbaya moment, accompanied by all those grandiose claims, result in any of the predictions coming true? (Because we all know the rhetoric we hear at these types of events doesn’t always hold up over time.) The answer is yes, and then some.

Letting railroad companies set their own rates and providing the flexibility to respond to market forces have allowed an industry that was in free-fall to come back from the brink. In the 30-year period before 1980, railroad market share fell from 56.1% to 37.5%. Since 1980, it has stabilized and increased to 40%.

Look at the chart below. The takeaway is unmistakable. Inflation-adjusted rates have plummeted more than 40% while productivity and volume have exploded. During that same period, the train accident rate dropped 80%. 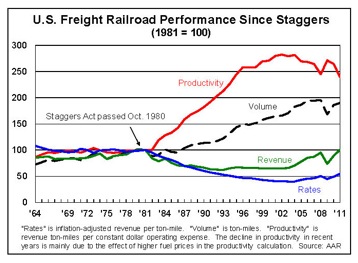 This freight rail renaissance has provided the rail companies with the means to invest in what is an incredibly capital-intensive business.

Right now I can read the bubbles above my dedicated readers’ (I am holding out hope that there is more than one of you) heads. The bubble says, “Wait a minute. What is all this talk about these private railroad companies investing in track? Are they taking credit for using my tax dollars to keep up and improve the railroad tracks?”

Well, dedicated readers, the answer is “no.” The cost of the whole system — including track, engines, and cars — is borne almost entirely by the privately owned railroad companies. This is something that is generally not well understood. In 2012, these companies invested about $14 billion in capital improvements.

In Wisconsin, we have 12 railroads, including the first four Class I railroads listed above, which carry around 200 million tons of cargo each year.

Am I arguing that the Staggers Act was a panacea? No, but I am saying that it has been an incredible success story. Allowing these railroad companies the flexibility to set rates and routes means that they will decide the areas they serve based on the cost effectiveness to their businesses. This does not always jibe with shippers’ needs or desires. There is a tension over this balance, which continues today in Wisconsin. Some tension is not necessarily a bad thing. The good news is the business community is working with the railroad industry to try to bundle shipments to create enough volume to make it profitable for the rail line to service them more frequently and on more beneficial terms.

Wisconsin also has a program that is relatively unique and that tries to fill in the gaps in service, which can sometimes exist when railroads base their decisions on profitability. The program is called the Freight Railroad Infrastructure Investment Program (FRIIP).

The idea is to retain service, when justified, in areas where a railroad has decided to abandon service for whatever reason. Initially, the program was limited to grants to local governments because of constitutional restrictions on state assistance to railroads. But in 1992, Wisconsin voters approved a constitutional amendment that allowed state money to fund railroads as a type of internal improvement.

This last state budget included $52 million intended for the state to negotiate the purchase of the 70-mile line between Madison and Reedsburg that was abandoned by Union Pacific Railroad. While the purchase has not yet occurred, the inclusion of money in the budget made officials from Sauk County and Seneca Foods, a Baraboo can manufacturing plant, very pleased indeed.

A Reedsburg Times-Press article stated, “Sauk County Board Chairman Marty Krueger of Reedsburg said local leaders supported state acquisition of the rail line to ensure industries’ viability and create a recreational amenity. ‘This is a great day for Sauk County,’ he said. ‘We’re tremendously excited across the county.’”

What is apparent in this example is just how important freight rail service is for many industries, as well as for entire communities across Wisconsin. What is also evident is that nothing is ever easy.

In freight rail, we have an iconic American industry that has not only come roaring back but has done so without the assistance of the taxpaying public. While it may be frustrating that we can’t always tell these private companies where and when they should run their trains, the results are a hell of a lot better than when we could.

The Transportation Development Association is happy to again team up with Gov. Scott Walker and the Wisconsin DOT to celebrate Wisconsin Freight Rail Week, Oct. 7-13. Click here to read the governor’s proclamation and find out more about freight rail in Wisconsin.