Fracking sand next battlefield for the fractious Left

You may have seen the cable TV promotion for Rachel Maddow. Standing in front of Hoover Dam, the MSNBC comedienne goes all red, white, and blue on us to sing the praises of big gummint. The lady wonders why America can’t do “great things” like build big dams. Answer: because of enviro-nuts like her.

One of them, the current president, can’t even let Canada build a pipeline to the Gulf of Mexico.

Wisconsin enviros are in their (rare earth) element, having stopped the iron mine in, ahem, Iron County. Their mantra: the America that built Hoover Dam cannot possibly mine for iron without wreaking catastrophic environmental calamity of biblical proportions, probably unleashing a plague of endangered-species frogs on the pharaoh. Having stopped iron mining, however momentarily, they’re now onto fracking for natural gas.

The U.S. and Canada are blessed with abundant resources – 100 years’ worth – of this clean-burning fuel. That’s not Hobbesian enough for the “U.S. out of North America” crowd.

Turns out, no petroleum-laden shale undergirds the Badger State. But we got lots of high-quality sand, and sand is used in a process known as hydraulic fracturing, or “fracking.” Basically, sand and water are injected into the ground to loosen this energy source so it can be harvested for the benefit of humankind (more fully explained here).

So, of course, Wisconsin enviros are working themselves into a lather over the environmental holocaust of digging sand out of the earth.

“Many see jobs coming to rural areas as justification for increased traffic and neighbors’ inconvenience. But critics are concerned about air and water quality, devaluing of nearby property, noise and light nuisances, and damage to rural roads, says State Sen. Kathleen Vinehout, darlin’ of the recall crowd, at Uppity Wisconsin. “Without state action to slow development of sand mines …” 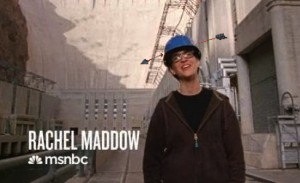 Don’t want to “inconvenience” anyone with, you know, “jobs.” Hey, it’s sand, folks. Don’t get much more organic than that.

Here’s a companion article from the Uppity Wisconsin blog. See if you can detect the slant in this headline: Mining companies invade Wisconsin for frac-sand. “Invade?” Call out the National Guard! They’re coming for our sand! Next they’ll come for our vuvuzelas.

Most of that silica sand lies beneath our beautiful wooded hills and fertile farmland, and within agricultural and residential communities, all of which are now being ripped apart by sand mines interests eager to get at the riches below.

And when they do stop their fear-mongering rant long enough to note that state law requires such lands to be reclaimed, the word “reclaimed” is enclosed in snotty, disbelieving quotation marks.

If you haven’t noticed, lovely Fitchburg and Verona, hard by the Madison metropolis, are dotted with sand and gravel mines. How did we ever survive?

What do you think, some sand went into Rachel Maddow’s dam? It’s a prime ingredient in concrete. And (need we say?) sand sculptures, as shown below. 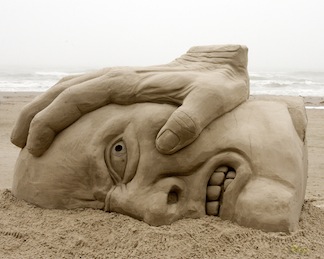 All this natural gas, coal, and petroleum was laid down during the carboniferous period, aptly enough, which occurred from 350 to 299 million years ago. It took fungi 50 million years to figure out how to decompose wood. That means that for 50 million years, the wood just piled up. Trees were gigantic because the earth was much warmer (there, you climate changers). They sucked up so much carbon dioxide that the amount of oxygen in the atmosphere was half again higher than today (partly because fungi was still trying to get its act together). Dragonflies grew to the size of seagulls. Oddly, most of the biomass was laid down as charcoal because of the persistent fires. Imagine lightning in that oxygen-rich environment. Fire even burned in the swamps. Dinosaurs grew to their great size because of the abundance of oxygen and died off when the meteor that exploded the Yucatan peninsula set fire to the world. I get most of this from the wondrous blog TYWKIWDBI.

Progs are deemed to be sore losers

Evidence that men are from Mars, women from Venus, and progressives from the Outer Limits: Here’s Rebecca Kemble in The Progressive magazine: “The corporate coup d’etat in Wisconsin is harder to ignore since June 5 when Scott Walker was deemed winner of the recall election.”

Yes, this is how Progs really talk, passive voice and all. They inhabit an alternate reality zone, a parallel universe only they can see. Is that kind of Lefty babble going to persuade anyone not already on the spaceship?

“Coup d’etat?” The Progs have it backwards, as usual. A coup d’etat is what the drum-beating occupiers attempted during the Siege of the Capitol – to overturn a legitimate election. So we held some more elections. At a total cost of $136 million in expenditures on both sides. Same result: Scott Walker was “deemed” the winner. (Deem: “To form or have an opinion; judge.”) So, it’s only “an opinion” that Gov. Walker was elected governor of Wisconsin twice within two years? What is the major malfunction with our portside acquaintances?

The rest of the long piece is the typical lefty rant against businesses organized as corporations, particularly mines and manufacture. They stand accused of trying to undo some of the hostility directed toward them by the Doyle administration. Later, the piece scores technical college presidents for asking employers how better to serve their need for workers. Why can’t those tech college presidents get a backbone and tell business to go to hell!

Conservatives have won the gun debate

It’s a settled issue. Conservatives have prevailed in another national argument.

No one can doubt the enormous clout of the NRA. But it comes about it the right way. It represents millions of members – including lots of union members and rural Democrats. Its supreme act of influence is defeating officeholders in free-and-fair elections. And its signature victory over the past two decades has been to bring about a sea change in public opinion on gun control. The NRA won the argument. Its influence is a function of its success in the art of democratic persuasion. – National Review editor Rich Lowry for Politico.

A suggestion: spend a little more time on the range, Pops.

… and are winning the school reform debate

I understand that the definition of an expert is someone from out of town. But when will UW-Madison’s School of Education express the tiniest academic interest in the subject of education reform. So, no, we cannot expect our campus teacher mill to invite its governor to lecture, debate, or have tea.

But Harvard had enough intellectual curiosity to do so. WisPolitics reports:

Walker, delivering the lunch address at the Kennedy School-sponsored "Learning from Improving School Systems at Home and Abroad" conference, said the collective bargaining restrictions, in particular, would provide local districts and boards greater flexibility to change current practices. Over the long term, Walker said, that would allow districts to become laboratories of innovation – and potentially to increase pay levels for teachers who excel.

What have I been saying?

No crony capitalism! What, Madison’s Edgewater Hotel will be developed by the private sector? Has the world gone mad!

I told a liberal loudmouth to go to hell. When I came back, he was still there! What impudence!