Death of a hardware store is requiem for a neighborhood

It is for good reason that The Wisconsin State Journal played the closing of a single hardware store as Page One news Tuesday.

The Meadowood Ace hardware store is closing shop after 25 years on Raymond Road on Madison’s southwest side.

As go signs of urban decay, this wasn’t the canary in the coal mine keeling over, this was the miner himself. It is the inevitable result of benevolent central government planning, the toxic fruit of the welfare society.

The hardware store is not leaving the Meadowood neighborhood. It has been driven out, victim of the societal version of Gresham’s Law in which bad behavior drives out good. It is a tragic opera that has been played out in countless neighborhoods and classrooms since the Great Society. The Fat Lady is singing.

“The drop in sales is directly proportionate to the change in the nature of the neighborhood right around the store,” owner Dennis Lochner told the State Journal. Customers “are choosing to go someplace where they feel safe, instead of coming to their neighborhood.”

Ya think? Flying bullets will do that to folks looking for lawn seed and house paint.

The littering, public profanity, graffiti, trespassing, vandalism, all-night partying, and other “quality of life” is the daily backdrop, as the Broken Windows Theory predicted, for occasional gunfire, pistol-whippings, and police SWAT team raids.

“It’s like Lord of the Flies out there,” said one concerned parent, referencing the classic work depicting children gone feral in the absence of adult supervision.

A good 700 of us in Meadowood and surrounding neighborhoods tried to make that point five years ago when we responded to then-Ald. Thuy Pham-Remmele’s citizen meeting, which briefly put community policing ahead of then-Mayor Cieslewicz’s preoccupation with trolley cars and bicycle lanes. 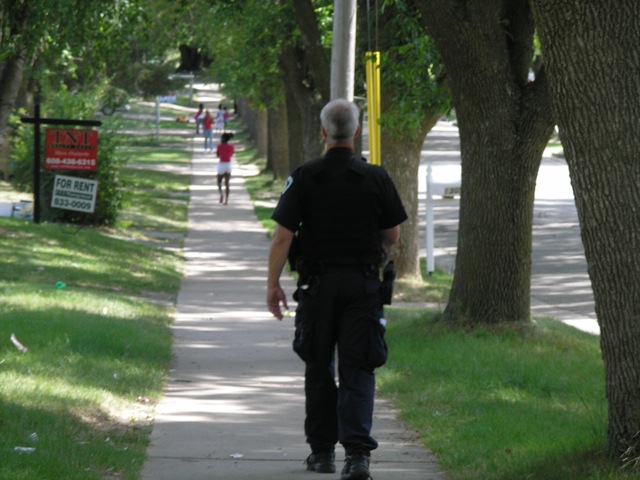 Progressive Dane and the all-powerful bicycle lobby fought back. When Ald. Thuy proposed a stricter curfew, the Madison Common Council instead enacted a looser curfew. A troubled Isthmus writer likened the spray of the M-F vulgarity to retirees leaf blowing their lawns – merely a matter of decibel, judge not the content. The writer suggested that Blaska and Pham-Remmele “take a deep breath” (“Mellowing out in Meadowood”). Four days later, a 17-year-old boy was shot to death by three 16-year-olds, members of a rival gang.

The city’s progressive power structure eventually marginalized Ald. Thuy, who was relegated to the food cart committee (she being Vietnamese and all). Yes, the only minority on the 20-member City Council was even labeled a racist for criticizing lifestyle choices that, predictably, led to poverty.

Those of us – people like Tom McKenna and Dave Glomp – who followed up with a grass-roots citizen effort to fight the erosion of standards of conduct were also labeled as racist by people like Lisa Veldran.

Lisa Veldran is the neighborhood association president in Meadowood. (These positions tend to be elected by whomever shows up at the annual picnic.) Mrs. Veldran is also the office manager for the Madison Common Council. She is the wife of County Supervisor Matt Veldran, whose contribution to public safety has been to ban elephants from the county fairgrounds. (Full disclosure: Matt deposed your faithful scrivener in the 2006 election.) She masterminded the election of Matt Phair as the area’s city councilman, replacing Ald. Thuy. In other words, Lisa Veldran is very much part of the power structure hereabouts. She must be held accountable.

Blame the victim (and cry ‘racism’)

Who does Lisa Veldran blame for the hardware store’s departure from the crossfire that has become Raymond Road? Whom?

You guessed it. She blames Meadowood Ace Hardware!

“To say it’s because of crime is disingenuous. There are issues, but that doesn’t mean you have to leave. I wish he would have worked a little harder on this.”

Did you hear that? She just called Ace Hardware owner Dennis Lochner a liar and said it’s his fault. He just didn’t work hard enough with the neighborhood.

In true prog-lib fashion, Mrs. Veldran has called for a meeting of city politicians, bureaucrats, and interested neighborhood “officials” to “study the viability of the shopping center.” As if government could determine the viability of a 3-week-old tuna sandwich.

Some of us would say that Meadowood Ace Hardware has already determined that viability. As have five other former tenants whose storefronts are today empty. Next up: tattoo parlors, pawn stores, and payday check cashers.

It’s the same phenomenon that drove out Cub Foods a few blocks away on Verona Road and, earlier, drove out the SuperSaver supermarket on the other side of Verona Road, hard by notorious Allied Drive.

Taxpaying homeowners are doing the same; that’s what is behind our neighborhoods’ free-falling property values, well above the city average. (Assessments listed here.)

Some of us would say that the city policy of “come and get it” Section 8 stipends of up to $1,600 a month, food stamps, and Cadillac social services have encouraged Chicago’s multitudinous gang bangers to seek greener pastures in once-bucolic Madison, straining to the breaking point.

Madison Police Captain Jay Lengfeld warned, “The at-risk population in Madison has exceeded the ability of service providers to service them.”

(I demonstrated the one-to-one relationship b/w Section 8 and crime here.) Academics writing for The Atlantic magazine proved the causation in their article, "American Murder Mystery."

The Madison School Board genuflected to the militant teachers union by vetoing of the Urban League’s proposal for a tough, no-nonsense school for minority students.

Ladies and gentlemen, this is the true cost of Progressivism. This is the creed that has governed Madison since Paul Soglin began his first term as mayor in 1973. There’s no blaming Mitt Romney or Scott Walker or various Koch brothers for the steep slide of a once-great neighborhood.

There is today not a single conservative in Madison city government; not one member of its school board, and only seven or eight on a county board of 37 members. Madison has reached progressive nirvana.

Mayor Soglin, Lisa Veldran, Mark Pocan, Brenda Konkel (advocate for public vagrancy), Stu Levitan (chair of the Community Development Authority Housing Operations Committee), et al., are fulfilling the promise of LBJ’s Great Society, which shifted responsibility for poverty from the individual to society. Poverty? It’s our fault (since updated to the hated “one percent”), not the school dropout’s fault or that of the serially pregnant teenager (father unknown), or the substance abuser. Nope, they’re victims, dependents of the state.

That’s why Progressive magazine editor Matt Rothschild says (as he did on WPR’s Week in Review program Friday) that society must “cure” poverty before it can educate minority-race populations. It never occurs that those pathologies are the cause of crime.

Madison and other urban centers operated on the progressive model, like Chicago, pursue the redistribution of income. To the extent they succeed, they exceed multiples of redistributing social pathology.

Fair warning, Mrs. Veldran. Blaska is attending your meeting and he will point a bony finger at you and your fellow progressives. In the meantime, read the online comments to the Meadowood Ace Hardware story on Madison.com.

• A weapons violation in the 5800 block of Raymond Road (right behind the Meadowood shopping center). The police report.

• Two arrested in pistol whipping on SW side. The police report.

Read my report, “Crime comes to a pleasant neighborhood.”

The Mitt that Romney says

Mitt Romney is correct. He needs to push the message that dividing America between the successful and so-called victims is the socialists’ road to serfdom. Here is his money quote from that secretly taped fundraiser:

Mother Jones magazine purports to have the full transcript. Speaking of socialists, here’s a video of Barack Obama, not yet president in 1998, saying, "I actually believe in redistribution."