Celebrating the contributions of Hispanics

IB will recognize Hispanic Heritage Month, Sept. 15–Oct. 15, with a series of articles highlighting the accomplishments of and challenges remaining for the local Latino population.

With National Hispanic Heritage Month kicking off on Sept. 15, it’s important to acknowledge the vital contributions Latinos make to the economy — both nationally and here at home in Wisconsin — especially because those accomplishments often go unrecognized. In fact, according to Hispanic Star, 77% of Hispanics are not aware of their own contributions to the nation.

Each year, Americans observe National Hispanic Heritage Month from Sept. 15 to Oct. 15, by celebrating the histories, cultures, and contributions of American citizens whose ancestors came from Spain, Mexico, the Caribbean, and Central and South America.

The observation started in 1968 as Hispanic Heritage Week under President Lyndon Johnson and was expanded by President Ronald Reagan in 1988 to cover a 30-day period starting on Sept. 15 and ending on Oct. 15. It was enacted into law on Aug. 17, 1988.

The day of Sept. 15 is significant because it is the anniversary of independence for Latin American countries Costa Rica, El Salvador, Guatemala, Honduras, and Nicaragua. In addition, Mexico and Chile celebrate their independence days on Sept. 16 and Sept. 18, respectively. Also, Columbus Day or Día de la Raza, which is Oct. 12, falls within this 30-day period.

According to the Pew Research Center, the United States’ Hispanic population has grown rapidly in the last 50 years. Today, there are nearly 60 million Hispanic/Latino people living in the U.S., and almost three-quarters of U.S.-born Latinos are millennials or younger. 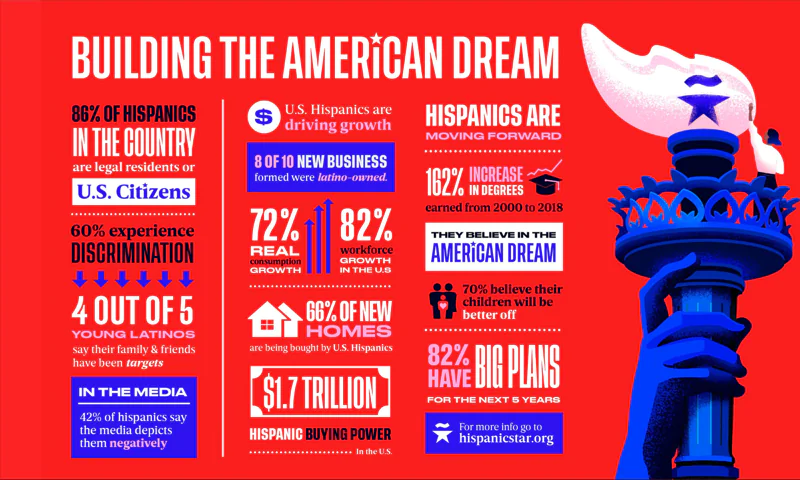 The “State of Latino Entrepreneurship” report from the Stanford Graduate School of Business reveals additional insights into Latino-owned businesses:

History of Latinos in Wisconsin

According to the Wisconsin Historical Society, the earliest known Hispanic/Latino encounters with Wisconsin occurred during the fur trade era in the 18th century. Spanish officials supported the American cause during the American Revolution, assisting in raids of British supplies stored at Prairie du Chien in Wisconsin.

The Spanish-speaking communities of Wisconsin date back to 1910. People of Mexican heritage began to settle here after the Mexican Revolution. Many others came throughout the 1900s to work in various farming and manufacturing industries. Since then, other Hispanic/Latino groups migrated to the state in search of economic opportunities or political asylum.

According to census records, only 200 Hispanic/Latinos lived in Wisconsin by 1940 and 1,000 by 1950. However, these numbers are misleading, as they omit seasonal and temporary workers who were here during that time. An example of this is the record of Mexican Americans who lived in Milwaukee by 1925. Records show that about 9,000 Mexican Americans lived in Milwaukee during this time, but the Great Depression caused many of them to lose employment and return home.

The first known group of Puerto Ricans came to Wisconsin in the 1940s. Many came to earn money to bring back to their native Puerto Rico. Most of these workers found jobs in tanneries, foundries, and factories. Initially, these groups of workers were given a warm welcome by Milwaukee’s white residents. In 1952, a “temporary Puerto Rican committee” was formed to help this group adjust to Wisconsin by providing information about schools, churches, and other social institutions. They were even given social gatherings.  However, this warm welcome did not last long, and this group was not afforded any special privileges after their initial introduction to Wisconsin.

During World War II, there was an increased need for food and agricultural  workers. The Emergency Farm Labor Program of 1943, also known as the Bracero Treaty, allowed for temporary employment migration from foreign countries to the United States. Wisconsin farmers imported male workers from British Honduras and Mexico, in addition to other male workers from Jamaica and the Bahamas. Laborers were brought here under this program until 1964.

In 1971, a special task force was created by Gov. Patrick Lucey to investigate the inequities faced by Wisconsin’s Hispanic/Latino population and to make recommendations for state action. Released in June 1971, the report contained a list of recommendations for issues faced by this community, including education, housing, health services, and employment. The recommendations provided by the task force were based on a report, prepared by members of the Hispanic/Latino community, that established the problems their population faced in  Wisconsin. The report did not achieve its goal, as in contemporary times discrimination, segregation, and inequality have hindered their progress.

Locally, a few events are planned to highlight the cultural and other contributions Latinos have made to Wisconsin and Dane County.

On Sept. 15, the Wisconsin Latino Chamber of Commerce (WLCC) kicked things off with a celebration and announcement of its first revolving loan fund, called PROSPERA. With support from both private and public partners, the PROSPERA Revolving Loan Fund will support Latino-owned enterprises that have seen obstacles in accessing funding through traditional pipelines.

“We are so excited to start a new culturally inclusive loan fund which will allow us to cultivate channels for access to capital to Wisconsin’s small or historically disadvantage Latino-owned businesses,” said Ramon Ortiz, chair of the Wisconsin Economic Development Foundation.

“This Latino-focused revolving loan fund is an important component in our work to provide affordable loans for the business community looking to scale,” added Victor Villacrez, newly appointed Chairman of the Wisconsin Latino Chamber.

The revolving loan fund will be made available through loan participation, syndications, and referral opportunities with nonprofit lenders and banks. Direct loans will be provided to support small businesses in Wisconsin alongside $50,000 in seed funding matched from CUNA Mutual Group, and $50,000 from the Wisconsin Economic Development Foundation. The WLCC will continue increasing its loan programs with support from local bank partnerships under the leadership of its loan committee chair and longtime leader Oscar Mireles.

“We are honored to have strong partners who value our Latino communities and the importance of their presence and how we invest in their long-term wealth,” said Jessica Cavazos, CEO of the WLCC. “We must find solutions to provide ways for these businesses to overcome setbacks brought on by COVID. This is one of our board’s core priorities moving forward.”

An additional listing of events taking place through Hispanic Heritage Month can be found through the University of Wisconsin–Madison, Madison Public Library, and Downtown Madison.

White-collar jobs are increasingly being automated

Alerts: The alarm system for your bank accounts

Madison ranked as the best place to live