The political left is fixated on a membership organization called ALEC. It stands for American Legislative Exchange Council.

Its membership is formed of state legislators who hew to a conservative-to-libertarian philosophy of limited government, free markets, and the federalist principal that all political power ought not be concentrated in Washington.

If you haven’t already guessed, that makes ALEC evil! EVIL!

State Rep. Chris Taylor, D-76th District, former paid lobbyist for the abortion-in-any-trimester franchise, crossed into the ALEC time warp and returned, in real time, to debrief herself to her constituents on Madison’s isthmus:

Last week I visited the Twilight Zone, otherwise known as the ALEC Conference …  a conservative organization that authors corporation-friendly legislation that is then pushed by conservative legislators around the country. [NOTE: not like labor unions, Chris?] Many of these terrible bills have been passed here in Wisconsin so, like my predecessor Mark Pocan, I entered the belly of the beast to see what ALEC is up to.

At ALEC’s national conference in Chicago, I attended workshops, subcommittees and task force meetings on education, labor and employment, “federalism,” tort “reform,” energy, and the environment and I was shocked to see how much this dangerous agenda is being promoted in our state.

… After spending two days with the nation’s top conservatives and hearing their plans for more privatization and more corporate influence … I … promise to do all I can to fight this insidious agenda.

Rep. Taylor gets some props from ALEC-obsessed blogger and local official Jeff Simpson. Playing the race, gender, and class card for all it is worth, he says he “admire[s] the courage of an out gay man and a strong woman heading to a conference full of rich white men with 1920’s attitudes!” 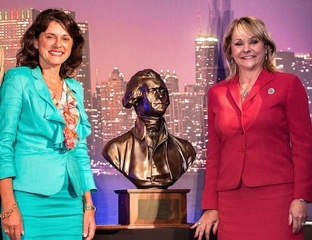 Jeff then posts at his Hate Walker blog a photograph of ALEC national treasurer Leah Vukmir, a Wisconsin state senator, presenting an award to Oklahoma Gov. Mary Fallin — both, inconveniently, of the female persuasion. But they ARE white!

Jeff, never one to miss mongering a conspiracy theory, builds on Rep. Taylor’s campfire ghost stories. Did you know, he relates, that “the vast vast vast [NOTE: that’s three “vasts” without a comma] majority of representatives they buy are republicans? … In Wisconsin, ALEC is almost the sole driving force behind the extreme right wing agenda that has been forced through our state legislature.”

There’s no mystery to the American Legislative Exchange Council. Nor does it take an intrepid Woodward, Bernstein & Taylor to penetrate the wall of secrecy — because there is none. ALEC has a website. It posts its model legislation online. It says upfront that the organization is dedicated to limited government (thank you, Tom Jefferson), free markets (boo to tariffs), and federalism. That’s a clue, liberals.

Justice Brandeis called the states the laboratories of democracy. Does it make sense that legislators might share best practices? If an idea is working in one state might it be recommended to other states? If liberals do not have an equivalent organization, then why don’t they?

Speaking of Thomas Jefferson — that’s his bust in the photograph — Simpson, a member of the Monona Grove School Board, shows he missed his American history class and, possibly, civics as well. “The one thing that really bugs me about all of this though is how you guys [NOTE: conservatives] misrepresent and bastardize Thomas Jefferson’s legacy. I know you don’t know this, but when Corporations got too powerful in the time of the Founders, they threw their products into the harbor.”

Umm, Jeff, corporations in Thomas Jefferson’s time were royal grants of monopoly. There’s a reason the libertarians call themselves Tea Partiers. It was a tax protest!

Here is Wikipedia: “The Boston Tea Party … was a political protest by the Sons of Liberty in Boston … against the tax policy of the British government and the East India Company that controlled all the tea imported into the colonies.”

You could look it up.