Blaska is so evil he almost mowed his lawn today

A typically clueless Progressive, posting at Blue Cheddar as “rkossik,” says he needs a lawn mower. A good conservative would pull the plastic out of his wallet and take one home, preferably with a built-in beer cooler and GPS screen.

But rkossic’s undies are in a fearsome twist because “… I don’t want my money used to attack Wisconsin workers and families.” This guilty lib won’t buy from home-state Ariens, because it pays dues to WMC, or from labor union-represented John Deere (which manufactures mowers in Horicon), because it’s a member of ALEC. So this liberal mope is looking at a Husqvarna, which he thinks is headquartered in Switzerland. (Actually, it’s Sweden. Hey, begins with “S.” Geography, it’s all over the map!)

In other words, he doesn’t want to attack Wisconsin workers and families, so he’ll send his money abroad! When did they stop teaching economics in Wisconsin’s public schools?

First they came for our guns, then our lawnmowers. I have reproduced the image of a typical lawn mowing tea partier so that you may study it and take proper precautions should this scourge visit your neighborhood.

(This has been another installment in the series “How Liberals Think,” a continuing project of the Blaska Policy Research Center and Herpetarium. It is funded through a ridiculously generous grant from the little-known third Koch Brother, Raoul.) 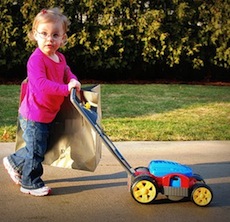 Looking for something to stick

The Democrat(ic) recall candidates, that is. Tim Nerenz, doctor of libertarianism, asks “and then what?”:

“The public-sector unions who endorsed Democrat candidate Kathleen Falk have now suspended advertising on her behalf with just weeks to go before the primary. Thank you so much, WEAC and AFSME, for forcing a primary upon us that will add several millions to the $9 million it was already going to cost the taxpayers to humor you with a recall, only to pull out when it came time to spend some of your own money on it.  …

“[Then there was] the astonishing admission of both leading candidates to unseat Governor Walker … have no plan to offer the voters of this state to counter the reforms enacted by the guy they want to replace prematurely. …

“Let’s see if we got this straight: we are supposed to throw out the guy who saved the state from fiscal catastrophe because he didn’t spell out his plan to a level of specificity satisfactory to his opponent, and replace him with said opponent who has — wait for it — no plan whatsoever.”

If I wanted America to fail

… “I wouldn’t change a thing.” Let this be the Port Huron statement of the Right — tea party, libertarian, and conservative.

The Associated Press reports, “Social Security is rushing even faster toward insolvency, driven by retiring baby boomers, a weak economy and politicians' reluctance to take painful action to fix the huge retirement and disability program.

“The trust funds that support Social Security will run dry in 2033, three years earlier than previously projected, the government said Monday. … [T]he pace of Medicare spending continues to accelerate. Congress enacted a 2% cut for Medicare last year, and that is the main reason the trust fund exhaustion date did not [move up].”

The same people who never saw the housing collapse coming, fervently believe in “climate change,” and think America can tax and borrow its way to prosperity owe it to themselves to read Paul Ryan’s prescription. Ryan writes:

“A common reaction … has unfortunately been, ‘What problem?’ The deniers claim that the Social Security trust fund will remain solvent for another 16 years, at which point the government could theoretically cover the shortfall by raising taxes. Others downplay whether any changes to Social Security will be necessary — they claim that sustained economic growth could take care of the problem all by itself. Neither is correct.”

This is a new feature for all you Platinum-level subscribers at Blaska’s Bring It! wherein I trip every circuit breaker, blow all fuses, and exhaust my supply of exclamation points!!! Suggestions welcomed! You never know what is going to set me off!

Today’s Tirade: After flacking the presidential candidacy of Democratic party reptile John Edwards, socialist provocateur John Nichols now is trying to foist a fake Republican against Scott Walker in the May 8 recall primary, Capitol protester Arthur Kohl-Riggs! Like, real Republicans listen to John Nichols? Born yesterday, we were not! (Write backwards, I sometimes do!)

Now THAT is good campaign lit: Why couldn’t our moderate-conservative county board candidates come up with some bold campaign literature like the first-generation American Ozzie deFaria of Florida, who is challenging the Democratic National Committee chairwoman for her seat in Congress? (Only, in Dane County, I’d surround my liberal opponent in the perp lineup with Darth Cheney, Karl Rove, and some Koch Brothers.) 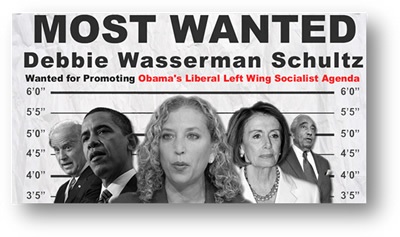 Crazy enough it just might work: “It's time to end the myth that the nation's wealthy are getting rich off the backs of the poor. Instead let's figure out what they're doing right,” writes a Fortune editor (as opposed to a Poverty editor).

“The Kathleen” is an expensive habit: The Friends of Scott Walker campaign has launched a new website, falkfacts.com. The website is being used to highlight what the campaign is calling the former county executive’s “outrageous tax-and-spend policies.”

We’re going to keep asking until they answer: Falk and Barrett, how much are you going to raise our taxes to pay for your schemes?

You’ve been warned: Coming soon, the next RecallWEAC billboard on the Beltline!

Rumor mill: Mark Neumann is planning on going negative against Tommy Thompson. Violators of Reagan’s Eleventh Commandment of Republicanism WILL be punished, Old Testament-style! (Can anyone loan me some more exclamation points?)